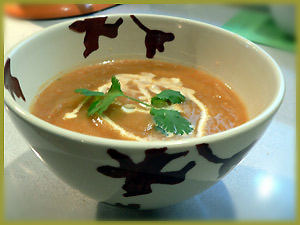 Two days ago, I was the unlucky winner of a ticket to go to have a root canal done. This came when I did not both expect and want it. Who really wants root canals anyway? I still had the memory of earlier this year, when I had had a tooth emergency and had spent 4 hours on the dentist’s chair for a similar procedure, followed by the worse pain ever. No need to say I was not very enthusiastic and excited to go. But I had to. Sigh…

My appointment was scheduled at 11 am. A lot of people would have taken advantage to sleep in before going. I decided I was going to make soup, so that I could still enjoy the pleasures of food, and eat something. At least I was not going to die of hunger. I needed to keep something joyful!

I love soups, and at my parents’, we have always made those last minute soups, with any vegetables handy. This was exactly my scenario. Hardly any food left in the fridge as I had decided to slow down on grocery shopping since we are going to be away for the holidays. Yet, there was still enough to make one of those delicious soups. So what would the soup of the day be??

Those soups take literally 25 mns to cook and prepare, 2 mns to mix the vegetables and then as long as you want to enjoy! The perfect plan!

Let’s look at what I had: 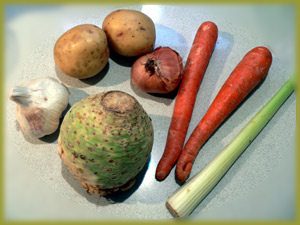 My main ingredient for this soup was celeriac. 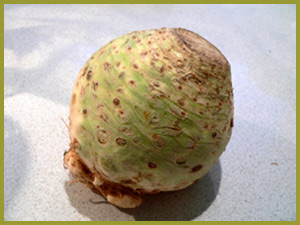 I just love this vegetable. Typically, the traditional French recipe known using this vegetable is céleri rémoulade as shown in Elise’s recipe, but I also like to make this salad with a lighter dressing, just a simple mustardy vinaigrette, and shred the celeriac very thin. Just a variation learned by playing with it.

But for the purpose of this soup, the principle is simple. Here is my recipe:

My root canal happened and I can tell you that this soup idea was of the most appropriate!