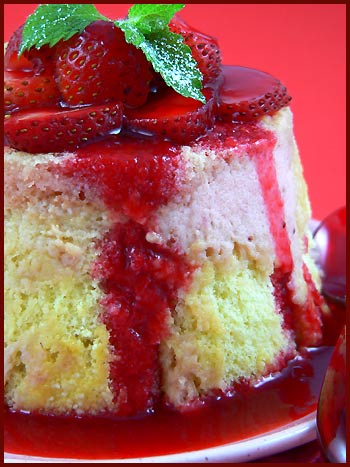 What is Your Name? Charlotte? But Who Are You?

Before I was born into this world, my parents were already faced with a dilemna with me. Here it was, the baby was to be a girl, and they did not know what name to give to me. No surprise as most parents are faced with this issue! After much debate, they narrowed down the endless list of firstnames to two possibilities. But they still hesitated. I was going to be called either Béatrice or Anne. And for some reason, I ended up with Béatrice. Did I like my name? I actually had no choice, but for the longest time, I just hated Béatrice as my firstname. So much so that no one in my home village in France knows me under that name. As a matter of fact, instead, I wish I had been called Charlotte!

Charlotte is a firstname that I have always loved. I found it fresh, happy and melodious. If asked what it is that I like about it, I would reply “c’est sa mélodie” (it is its melody). But here are also some facts. I guess Charlotte is a firstname way more popular than Béatrice! In 2003, 2287 French baby girls were named Charlotte, against only 27 Béatrice. Charlotte is also the 28th most popular female firstname in France, while Béatrice holds the 765th position. My firstname is pretty old-fashioned! Well that is not the point. What I should actually admit is that Charlotte is the name of one of my favorite French actresses, Charlotte Gainsbourg, and that it is the name given to a dessert that I am obsessed with. Really obsessed with.

Charlotte Or How to Use Homemade Ladyfingers

Deliciousness, airy, cream, chantilly, fruit, berries, fresh, summer, light, picnic, grandes vacances are all our words that come to my mind when I think about a charlotte. I still remember my brother and I begging my mum to make a charlotte every weekend during les grandes vacances (summer vacation), when friends would come over for dinner. We could just never have enough of it. Around the time when it was the prime season for red berries such as strawberries or raspberries, it was just the perfect excuse to use the excess of those fruits rouges (red fruit).

“Mais qu’est-ce que je vais faire avec toutes ces fraises ? “, my mum would often ask. (What am I going to do with all these strawberries?)
“Une chaaarloootteuuuu, s’il te plaît maman !”, was our answer. “Ca va vite, hein, dis! C’est facile !”
“Yes, it is an easy dessert !”, she would admit.

My mum used to make hers in a special Tupperware charlotte mold, with which unmolding the charlotte was really made easy. While in France in late May this year, my sister-in-law and I had decided to cook lunch for Mother’s Day. While Geneviève was in charge of making amuse-bouches along with the main course, I prepared the appetizer and the dessert. And, oh yes, let me tell you how it felt when, by accident, after poking around in my mum’s kitchen cabinets, I found her white tupperware mold hidden behind a pile of unused stuff! I had found an old hidden treasure! When I showed the mold to her, she even added:”Tiens, il existe encore celui-là ?” (This one sill exists?) I had my dessert, just in front of me. We had heaps of juicy strawberries in the garden, there was cream in the fridge and a box of biscuits à la cuillère in the pantry. I was excited. I had not made or eaten a charlotte in ages!

I am not sure why I am so obsessed with this dessert. Maybe it has to do with its slightly slanted shape, from looking elegant to decadent, perfect to imperfect, rustic to classy. A charlotte is, to me, all those things together. It is reminiscent of times spent as a young girl during les grandes vacances, when all I needed to worry about was nothing! My friends and I used to spend our afternoons running in fields to steal ripe fruit from trees, cycle around in the village, and relunctantly help our mums to clean peas or French beans. On trainait au village ! (we used to hang out in the village!) It was the time when we were allowed to stay up because the sun would set so late. During that time of year, we used to eat a lot of charlottes with red fruits.

If you want to know, a charlotte derives from an old English dessert made of buttered slices of white bread with a filling of apples and fruit marmalade, cooked and served with a crème anglaise. From this dessert, Antonin Carême invented the charlotte à la russe, an entremets frappé eaten cold, which requires no cooking time. It typically would be made of a vanilla cream base (or a chocolate or coffee mousse, whipped cream or an appareil à bombe) poured into a dish lined with alcohol-flavored ladyfingers, before being placed in the fridge for a few hours. The truth is that, although looking like a complex dessert, a charlotte is in many ways easy to make and forgiving. You do not need to have excellent pastry skills. In fact, I love that no cooking time is required to make it (unless you make your own ladyfingers). The kind of “Mince, mon gâteau n’a pas monté !” (Crap, my cake did not rise!) never happens!

The recipe I decided to make was pretty much what I recalled my mum’s charlotte used to look like. She wouldn’t, however, use gelatin as I did, in which case the cream would just be somewhat more runny. Same deliciousness though!

On Mother’s day, not usually being much of a dessert person, my mum happily surprised me when I came to the table, my hands holding the charlotte aux fraises et son coulis made the night before. We all ate a slice each, before she asked the first: “j’en reprendrais bien une petite tranche!” (I would not mind a second serving!) It was her fête after all! Mum, you made my day! 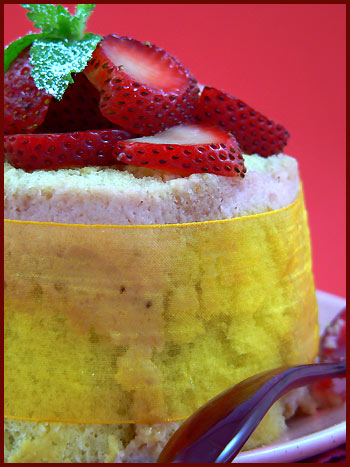 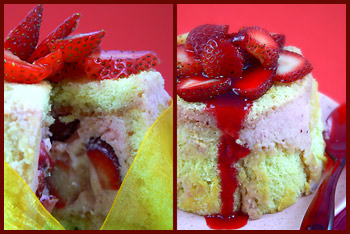 Note: In the recipe featured here, I made small charlottes, with molds measuring 4 ” diameter, 2.5″ high. If you want a big one, the cream base stays the same in quantities, but you might simply need less ladyfingers.

Use two batches of the biscuits a la cuillère here, or buy some.

Strawberry Charlotte
(for 4 small charlottes, or a big one)

For the Strawberry Cream

For the Raspberry Coulis 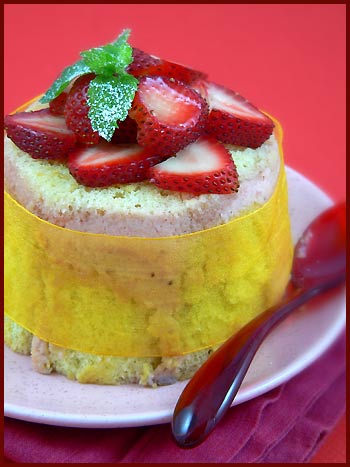