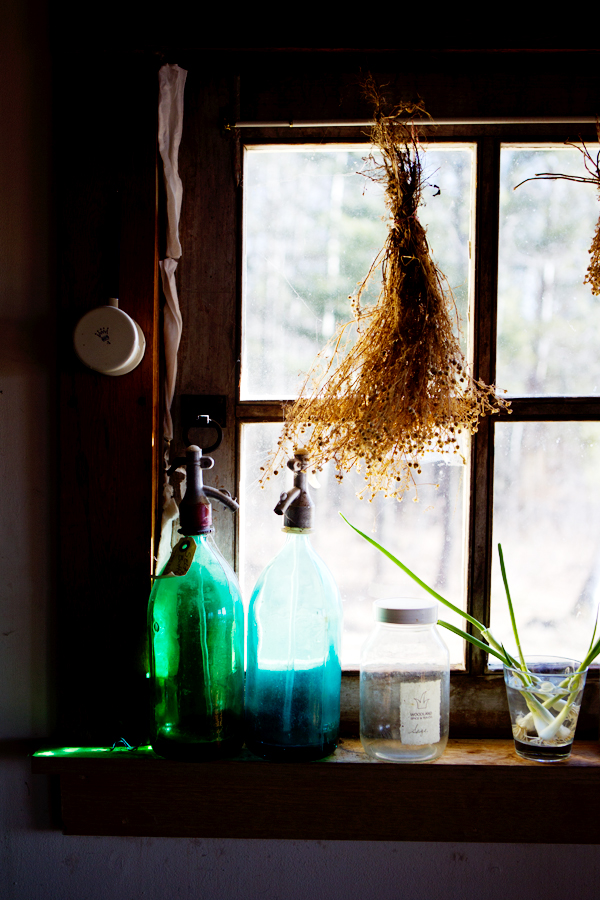 “There’s another one!” Lulu told Pam with excitement while holding one egg in each hand. Her small hands were just the right size to hold the feather-covered eggs freshly collected.

“Maman, il est encore chaud !” (Mummy, it still feels warm !) she exclaimed as she turned to show me the eggs. You would have thought she’d just found a rare treasure.

I loved to watch her. So happy as she stood in front of the henhouse with the chicken. So excited to visit them every morning shortly after breakfast. She’d put on her Wellington boots to follow Pam outside to feed the chicken. Together, they’d collect the new eggs.

Oh the joy of farm eggs!

I remembered how it felt. At her age, whenever I visited my grandmother’s farmhouse, I was also the one allowed to collect the eggs. 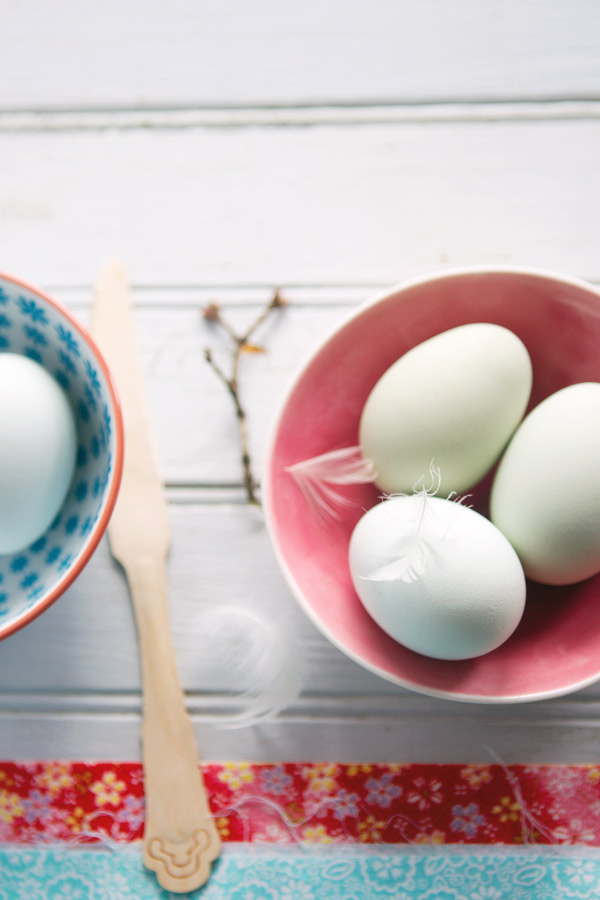 Last week, Lulu had a week of vacation. For a while, we imagined that during her school break, we were going to take her to France to learn to ski.

The thing was though that, at the same time, we agreed that we wanted a quiet trip. One that didn’t involve airports, plane rides, puffy eyes and jetlag.

In fact, what we really wanted was to take Lulu on a road trip in the countryside. Tous les trois. I imagined that we’d set on one of these fun trips when the car is so packed that it’s hard to see through the back window.

Right away, we thought of Vermont. And then Montréal.

Because the truth is that we really love it up north. 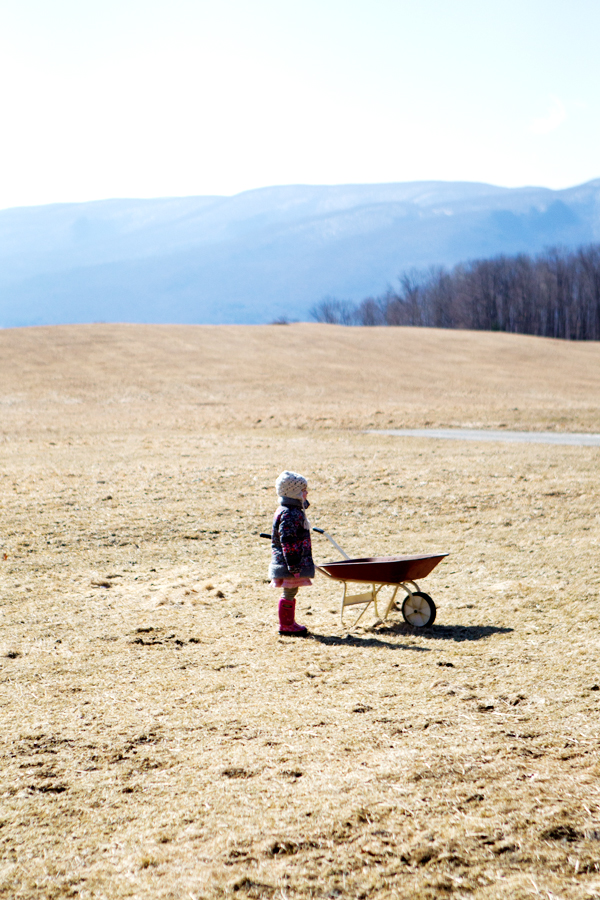 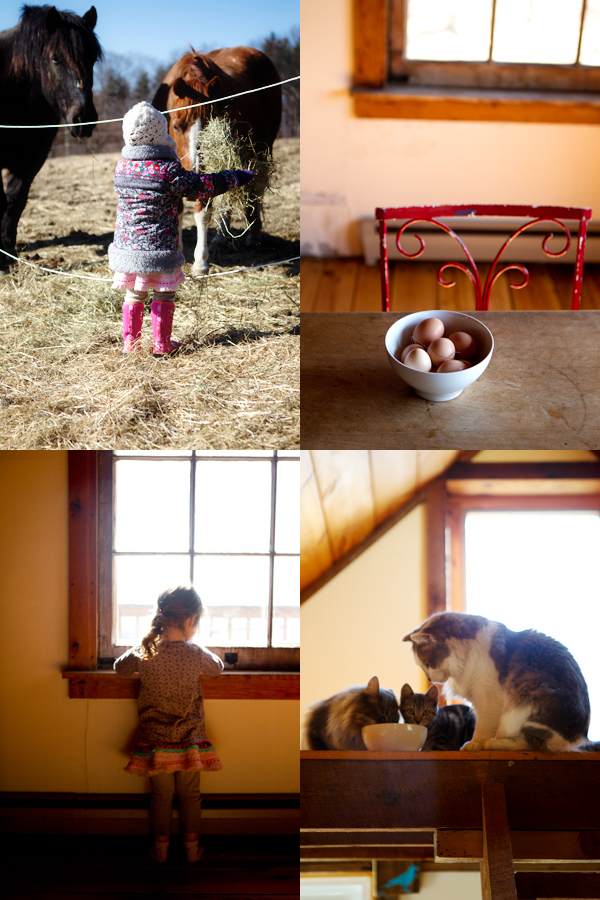 Despite the fact that it was February and the rolling hills looked brown without pretty flowers in sight, it was just what we wanted to see. Because on the way, we were going to visit Nadia who lives at the top of a beautiful hill in Vermont. And then we’d make a stop to spend a few days with Pam and Josh, old friends of P.’s. 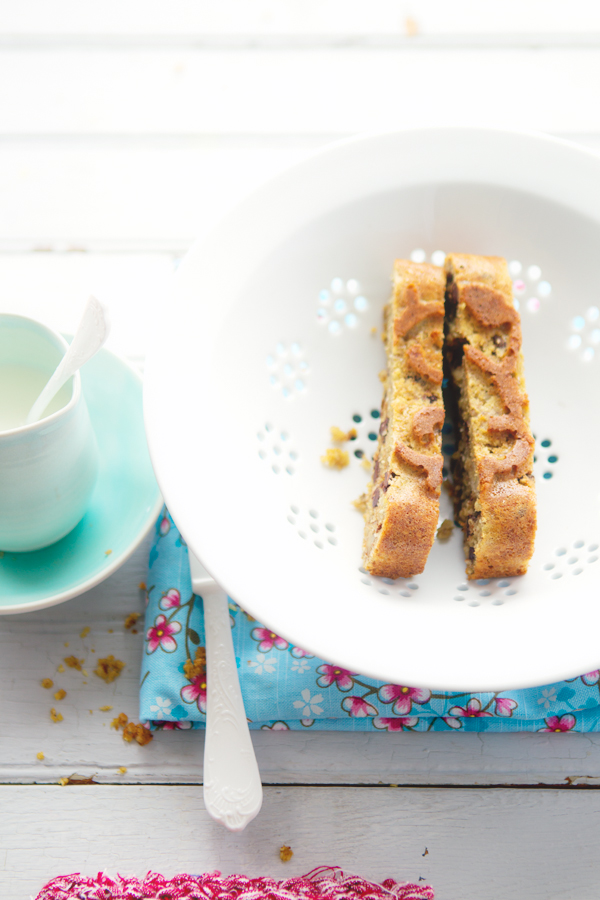 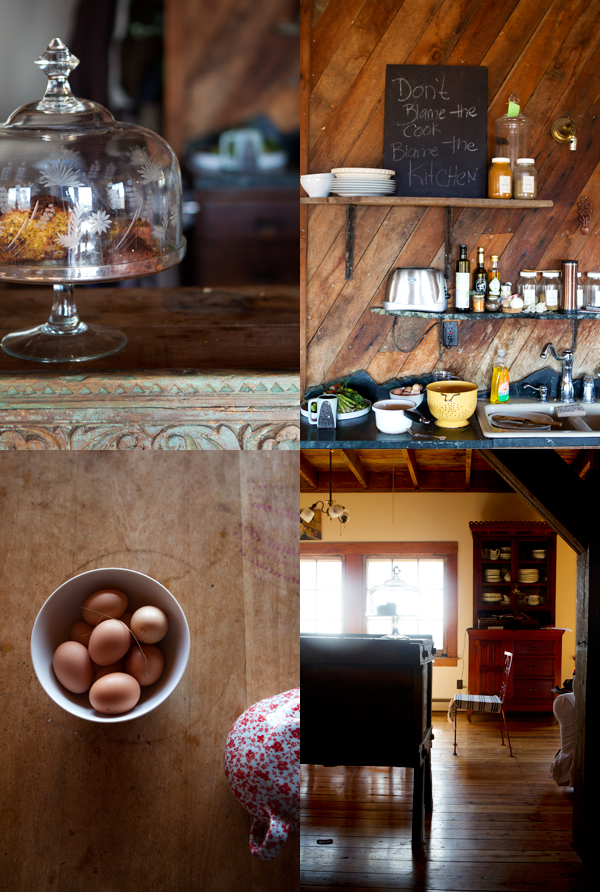 Vermont is undeniably rural. I love it for that.

In Vermont, there are farms at the corner of every road, cheerful-looking red barns that make me want to sing, lots of cows, farm made goat cheese, raw milk and maple syrup to be sampled, and Sissy’s Kitchen for delicious lunches.

In Vermont, there also seems to be horses and chicken at the back of every house. And fresh eggs that appear in numbers. Day after day.

I felt giddy to be in the middle of all of it for a few days. 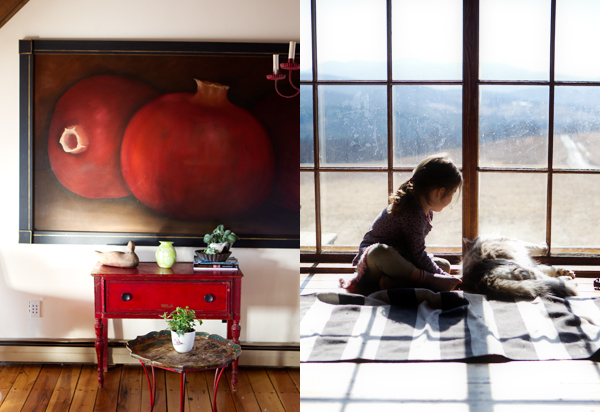 I had not seen where Nadia lived before. But somehow I knew that I was going to love her space. Oh the pretty colors I saw! The girl has an obvious eye for beautiful things with tons of character.

Walking inside her countryhouse felt as if I was visiting the dreamy pictures posted on her journal-like blog, only that then it was real, and I was actually physically there, surrounded by an amazing sheet of peacefulness.

The calm found at the top of the hill won our hearts.

Nadia was humble about it, but during our stay with her, she really treated us to delicious homemade dishes cooked with love. A few times a day, the five of us gathered around the long farm table for food. We shared plates of roasted root vegetables and chicken and mussels. And while Lulu liked to sit near the large bay window to pet one of Nadia’s cats that basked in the sun, the four of us chatted away. About our lives. 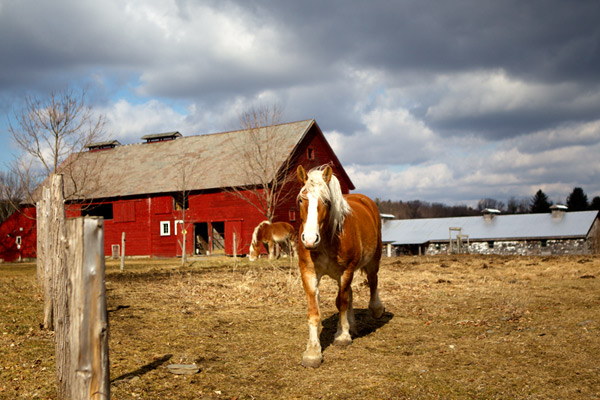 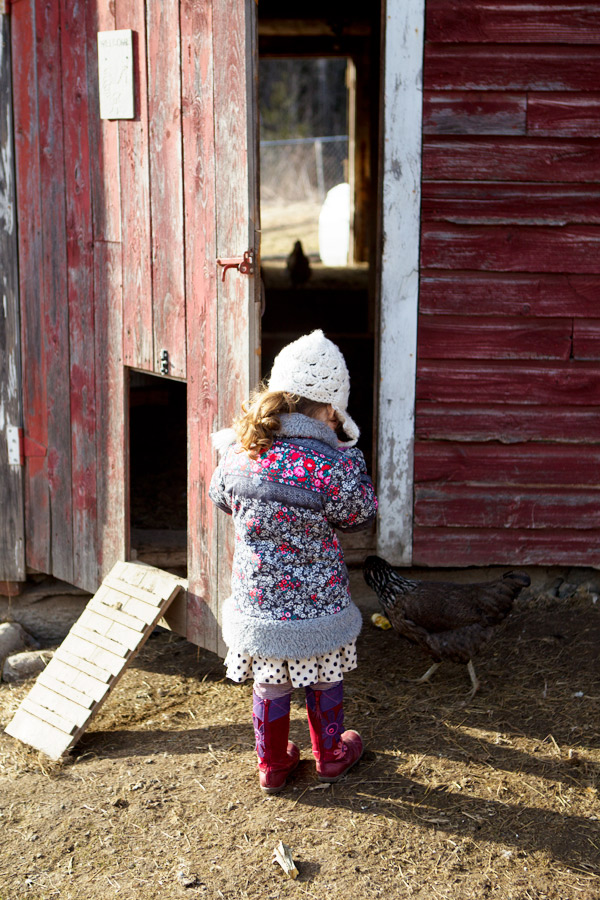 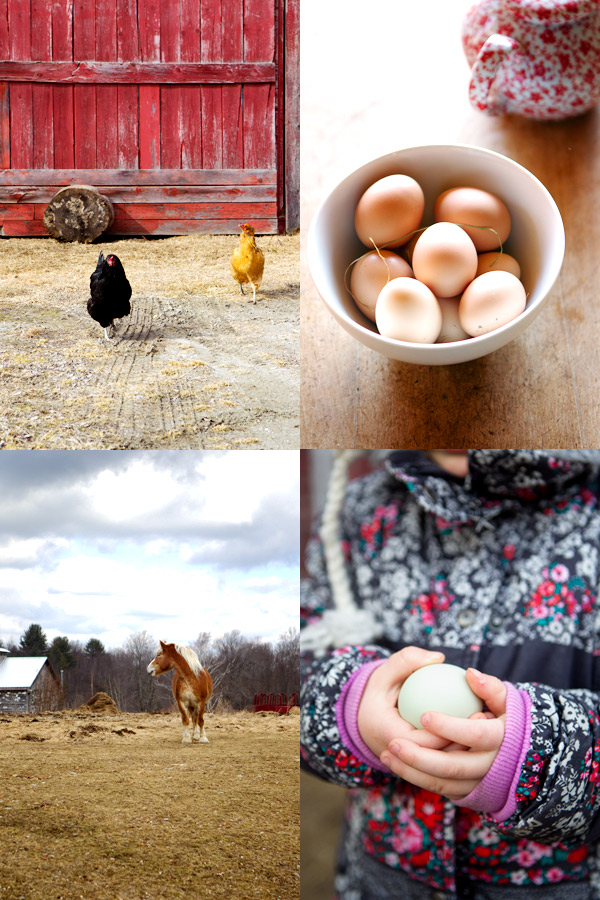 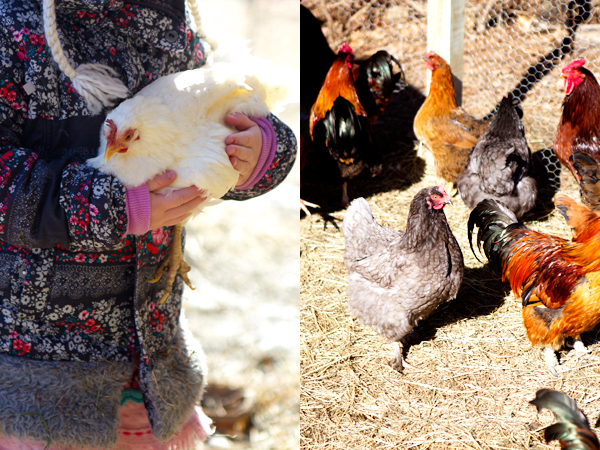 Despite the cold, we took short walks outside between meals. There were horses to be fed. And eggs to be collected.

“Tu veux porter une poule ?” (Do you want to carry a chicken?) Nadia asked Lulu in French while holding a young chicken in her arms.

Lulu stared at the chicken. Her face instantly lit up. I could read a mixture of oh yes pleaaaaaaase, and oh non! in her facial expression. She stood immobile. Without waiting for Lulu’s response, Nadia delicately placed the chicken between her hands.

“Tiens-le bien par là,” (Hold it here), she told her. I was staying near them, watching.

At first, I thought that Lulu was going to drop the chicken all together and run. But instead, she remained still. Extremely quiet. Not moving a tad. A large smile was now eating up her entire face. 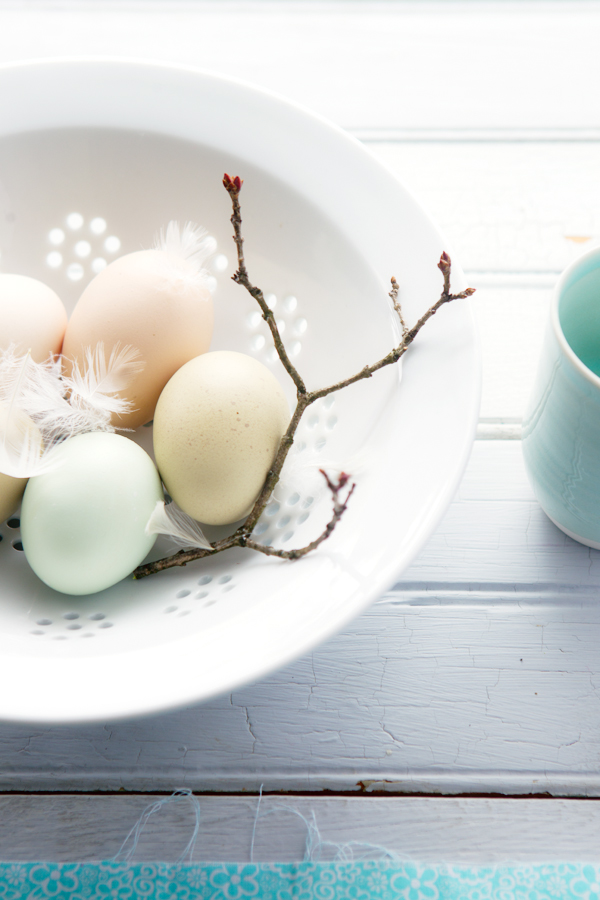 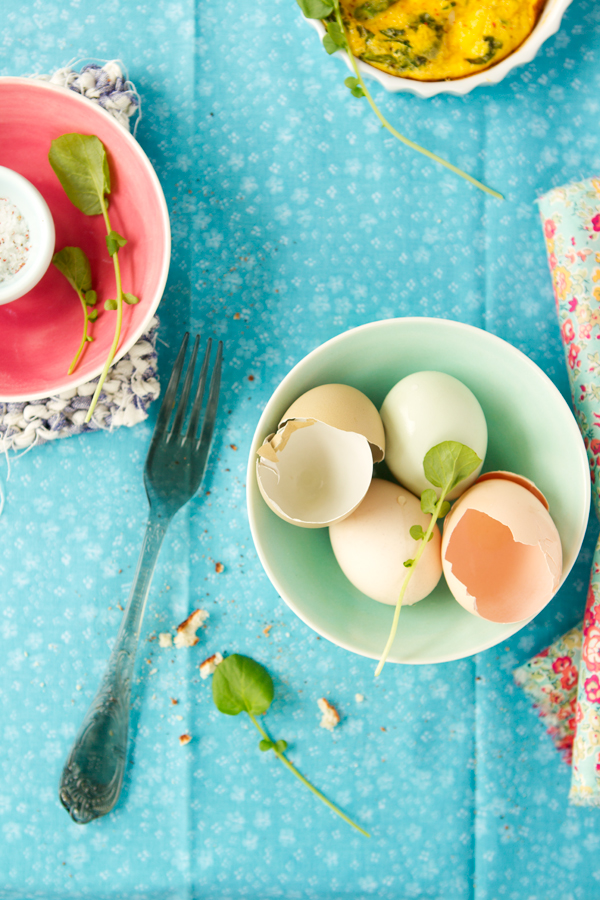 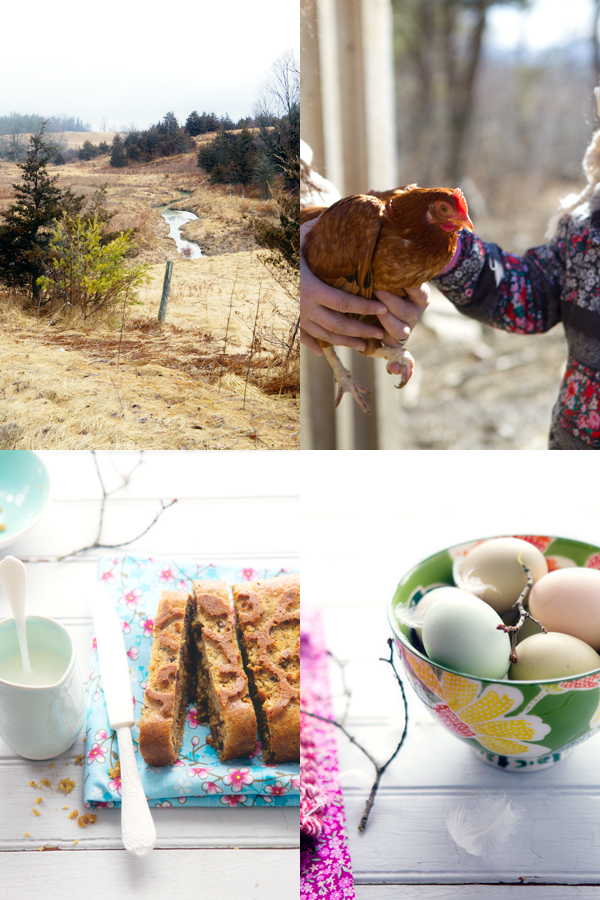 Naturally, we ate a lot of eggs. Which made my small family extremely contended.

At Pam’s, plates of sunny face eggs served with toasted bread and butter welcomed us to breakfast. Nadia prepared omelets with vegetables that she baked in the oven. And she baked banana bread.

The quality of the eggs we ate inspired me. With the deep yellow orange color of the yolk and the thick outer shell, each egg we cracked open looked like the healthiest egg I had seen in a while.

“Do you want to take some eggs with you?” Pam asked on Thursday morning as we were getting ready to leave for Montréal.

I turned to look at the trunk of the car packed to the roof.

“Of course, we have so many of them.”

It was my turn to be beaming while holding a box filled with a dozen of beautiful looking farm fresh eggs colored with hues of blue, green and light beige.

They were the treasure I was taking home. 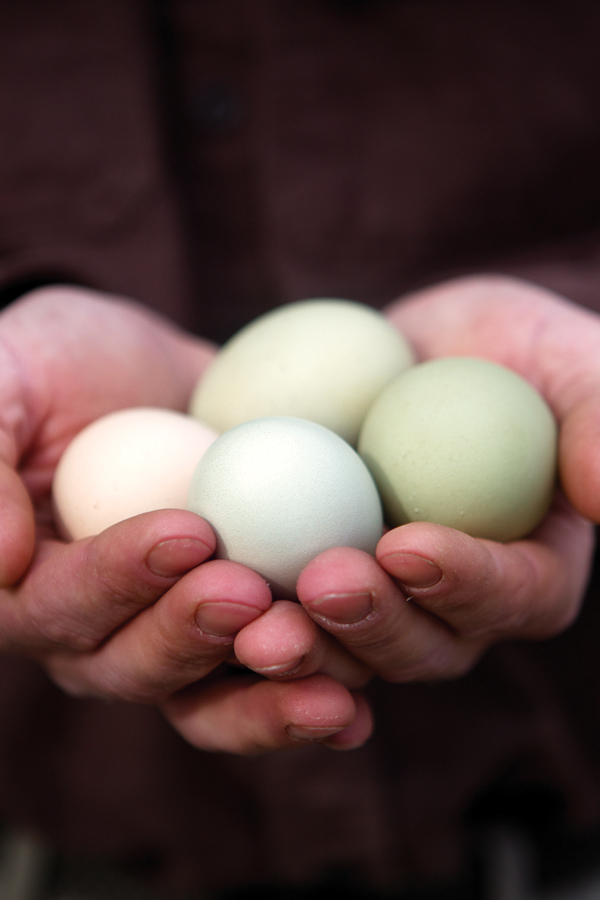 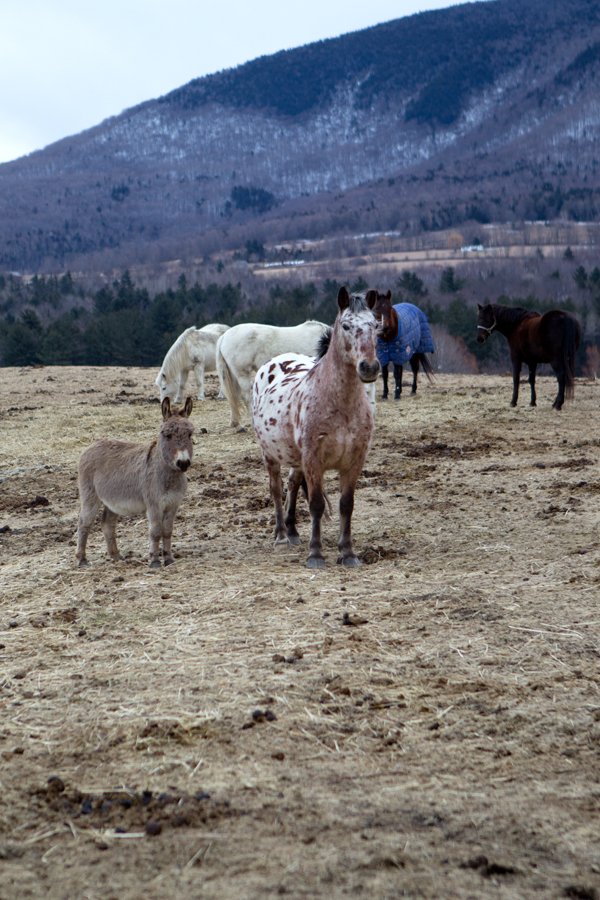 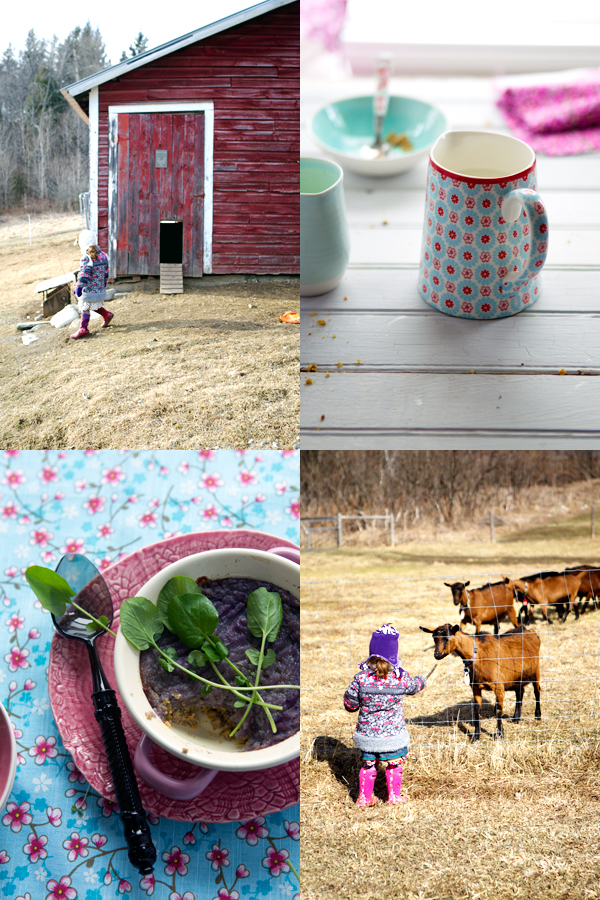 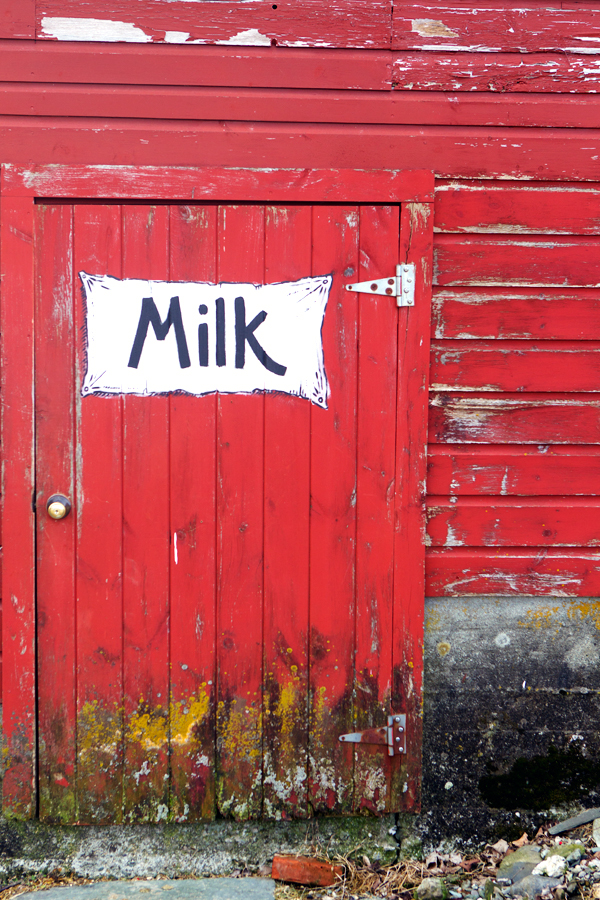 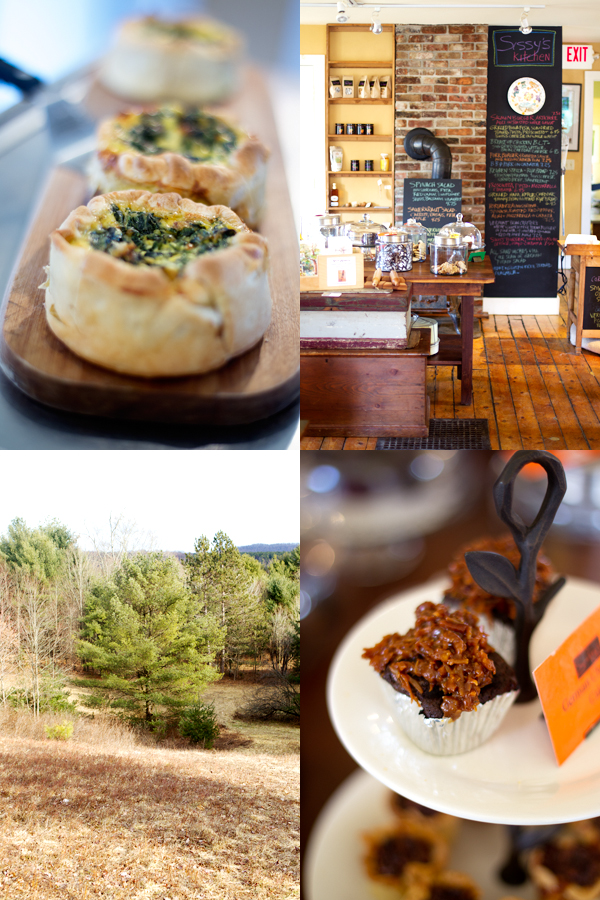 Nadia inspired my banana bread recipe as well as these delicious baked omelets. At first, I actually didn’t know how to call my egg dish. Baked omelet sounded right though, as it’s what they really are.

I prepared my dishes with the eggs Pam had given to us. Oh how glad I am I did. 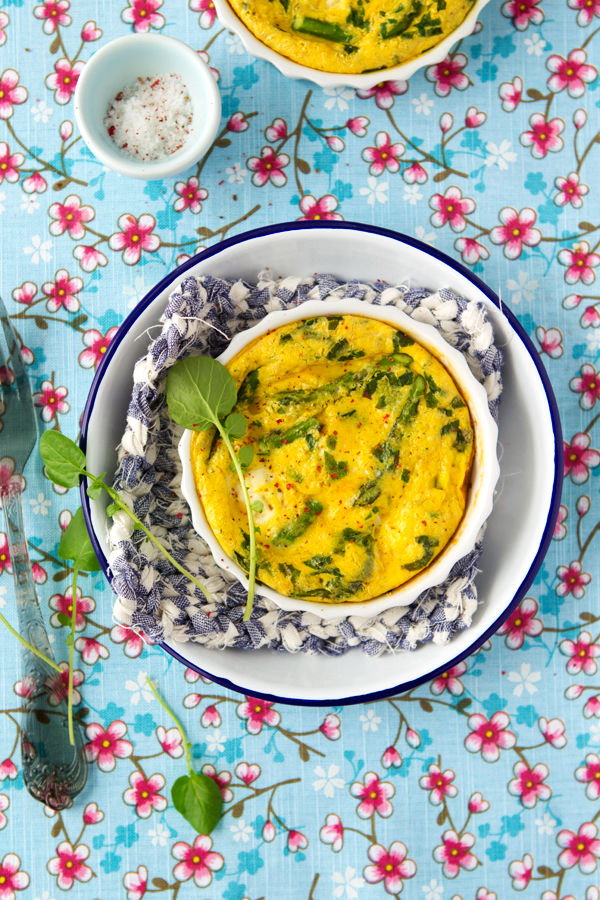 We ate the omelets for breakfast on Sunday. We munched on the banana bread during the week, one slice for each one of us a day. To prolong its taste.

It felt like we were celebrating the delicious memory of spending time at Nadia’s and Pam and Josh’s houses. 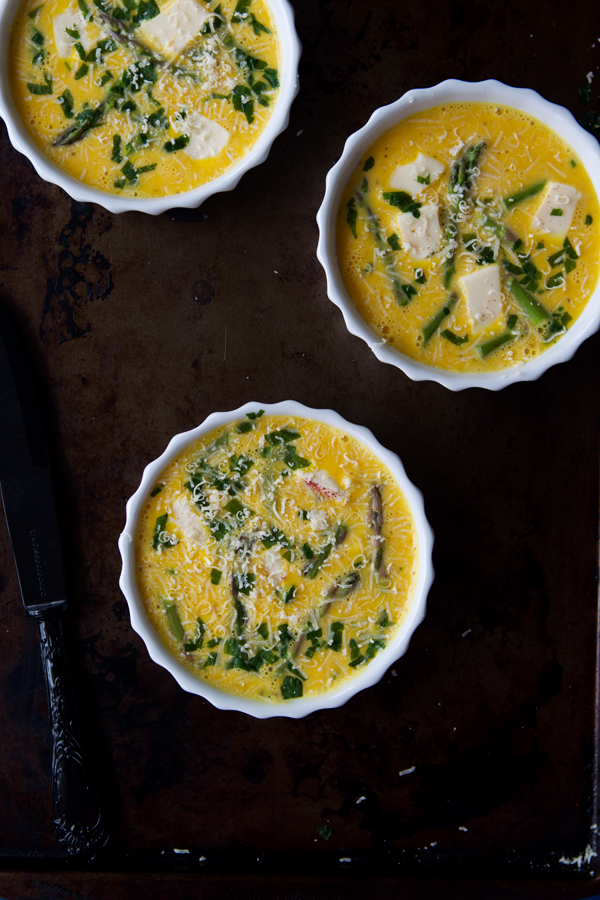 “Je veux que Nadia, Pam et Josh viennent dans ma maison,” (I want Nadia, Pam and Josh to come to my house) she told me after school on the Monday following our return.

“Et les poules et les oeufs aussi? ” (And the chicken and eggs too?) I asked, curious to hear more.

I understood what she meant.

PS: And before I forget, I will share the banana bread recipe soon…. 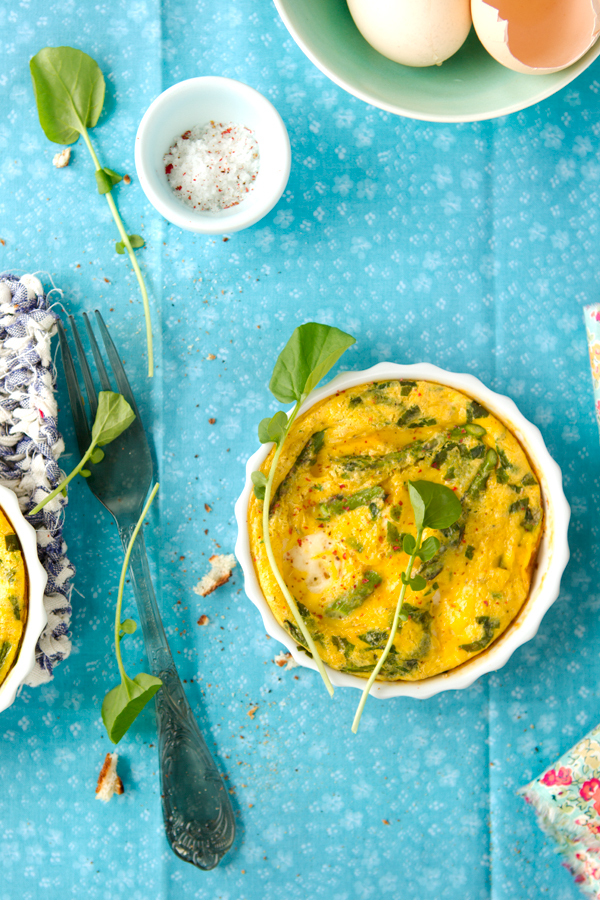