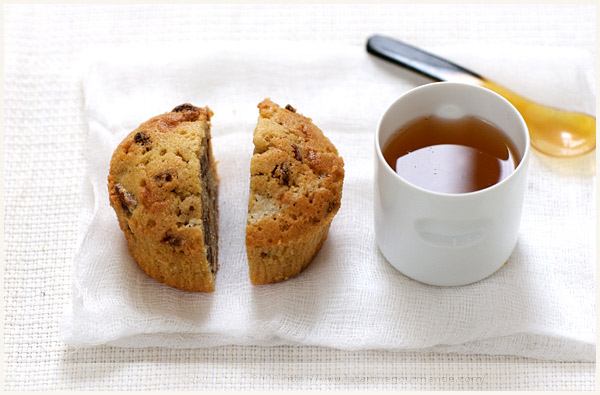 We looked at the weather forecast on line and realized that Saturday was going to be the least cold day of the weekend, even if not the sunniest.

“Let’s go and have a picnic at Halibut Point,” P. told his parents. They were visiting us for the weekend. His mother looked back at him, an undecided look on her face. She hesitantly ventured: “It will be cold there, won’t it?”

“Right, windy! But we will bring a thermos of tea, and warm blankets!”

It was probably a crazy idea all things considered, but we were all sold on it. The prospect of being out sounded great.

“Fine with me,” I responded. “We can always get some nice sushi at Whole Foods, and I will bake some cakes to nibble on.” 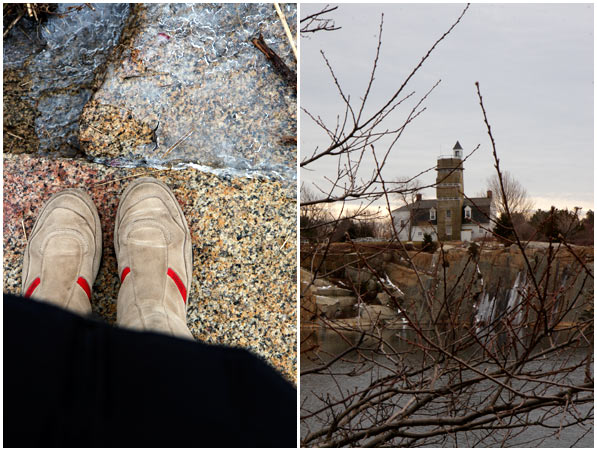 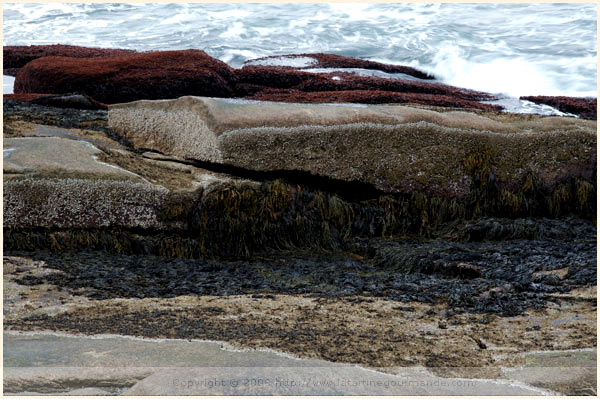 Halibut Point State Park is another place by the water where we like to go. The state park is located by the ocean in Rockport, only one hour drive North of Boston. There are no beaches, but a vast extension of weather-beaten bluffs, impressive granite rocks with tidal pools, only a few trees — because the place is constantly exposed to winds — short trails and a quarry. During the winter especially, many seabirds can be observed as they feed themselves in the rich offshore waters. We enjoy picnicking in the park, even more so off season, because it is the best time to appreciate the tranquil atmosphere of the place, despite the weather that can be wild.

“Brrr, it is really cold,” P.’s mother said when she stepped outside the car, bundled up in the long warm winter jacket she had borrowed from me.

”Even with this jacket on?” I asked laughingly.

But tea helped us to warm up, and so did our food. The sushi was excellent.

“Next time, I will actually bring soup,” I suggested.

We managed to find a sheltered spot to put our blankets on, and enjoyed lunch with a view. As expected, it was quiet, with only a few people who, like us, had decided to go for a short quick stroll on the rocks. I also noticed a group of photographers, with cameras and tripods, walking back up. 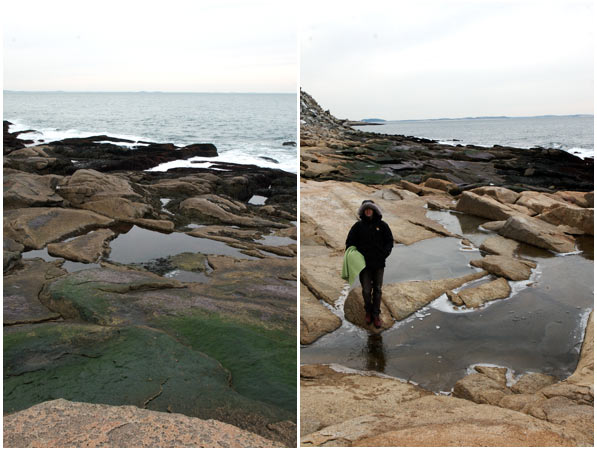 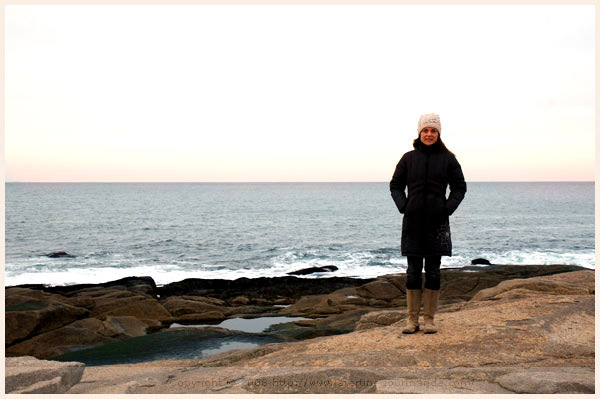 A few nights before my parents-in-law arrived, I had thought of a new cake recipe I wanted to bake. It included amaranth and brown rice flours (my father-in-law cannot eat gluten), along with goji berries and pecans, two ingredients I gladly eat as a daily snack.

“You will see,” I told my mother-in-law when she looked at one of the cakes left on the cake stand in the kitchen, “you will like the berries I am sure, and I think you will love the texture and taste of the cakes too.” 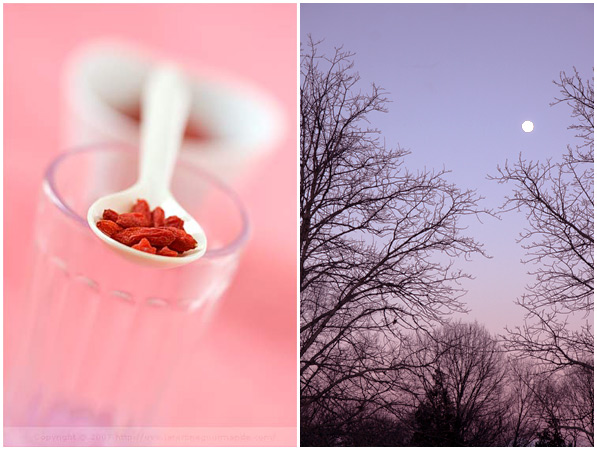 In fact, she liked the berries and cake so much that she asked whether she could bake another batch with me, to make sure that she would be able to bake them again back home. I loved the idea, and we agreed to save time for our baking project. There was, however, one rule: she would bake alone, and I would watch.

Having my mother-in-law bake one of my recipes in my kitchen was an interesting experience. I actually took this as an opportunity to observe, and see whether the recipe worked. Did I explain well what to do? Did I give enough details? Would she follow it word for word?

“You are not starting from the beginning,” I told her after a few minutes.

“Do you not prepare your ingredients first, to be sure they are handy when you need them?”

That was the first interesting observation. After working as a recipe tester and being asked to follow the recipe to the letter to accomplish the task, I could see, however, that I should not necessarily take this for granted. Every cook has his or her own ways.

“All right,” she went on. “Let me follow the recipe as it is written, and we will see what happens.”

Off she went to bake, and I to watch.

“Look at how nicely they came out,” she exclaimed happily, bringing the baking sheet with the cakes still warm from the oven for us to see. They had risen nicely and had a lovely golden crust.

“I think it’s a real success,” I said, quite happy that the recipe had worked.

She did not wait for the cakes to cool and took a bite.

“They’re even better when they’re warm, straight out of the oven” she added.

The cakes were not too sweet, dense in texture, with a welcoming grittiness because of amaranth flour, providing a healthy gluten free treat that I was sure, my father-in-law would be thrilled with.

I was actually secretly too.

So much so that over the course of the weekend, I got carried away and cooked all sorts of new recipes for them to sample, Thomas Keller inspired appetizers with delicious French and Italian cheese (Chaource), and Serrano ham purchased at Formaggio Kitchen a few days before, a raddichio risotto — my new favorite risotto — custard berry crumbles, vanilla and chocolate petits pots de crème, and yet another cake recipe, with green pistachios and dark chocolate this time.

But I am saving these recipes for another time.

A few words about Goji Berries

Goji berries (also known as wolfberries) are commonly cultivated in China, Mongolia and in the Himalayas of Tibet; they have been used for over 6,000 years for many health benefits, which include boosting the immune system, protecting the liver, helping eyesight, and improving circulation. They are rich in antioxidants. You usually find them dried in the nut section of your supermarket, if they sell them. They are not too sweet but a little sour, delicious added as such to a bowl of cereals, or infused in tea. They also work wonderfully baked. There is no need to soak them, but you can, if you prefer. 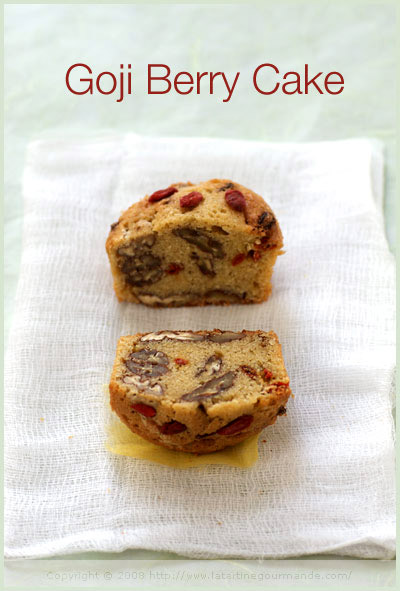 (Note: This is a gluten free recipe
* can be replaced by all-purpose flour)