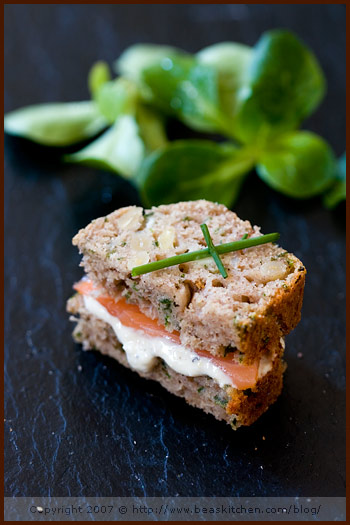 Chestnut and Crab Cake with
Smoked Salmon and Horseradish Cream 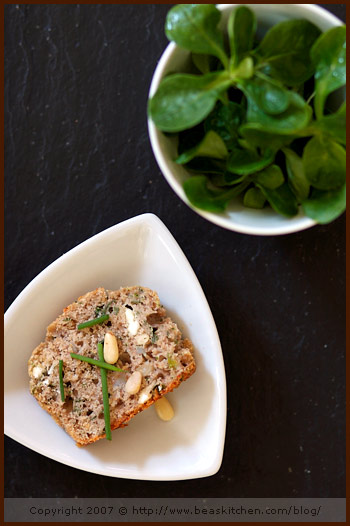 The movie looked promising despite the bad critics it had so far received. We opened my MacBook to watch the preview of Breaking and Entering in which Juliette Binoche played along with Jude Law. The story seemed good. IMDB talked about “a landscape architect’s dealings with a young thief causing him to re-evaluate his life” to describe the plot, motivating us to go to see the movie. Yet we hesitated, as we sometimes do for no particular reason but the sake to hesitate. Within a few minutes, we changed our mind and decided to stay home, both preferring a cozy night in. In fact, I was happy to cook us something nice for dinner. During most of the day on this past Sunday, we had both been feeling in a snuggly mood. The run I took in the morning to the nearby park had really been the extent of my time spent outside. I did not even have the weather as the excuse. It had been gorgeously sunny. We simply felt homey.

Since the initial plan was actually to attend a friend’s birthday party who happened to be sick, I had not really planned dinner. No choice, my improvisational skills had to come into play. By 6:30 pm, I went downstairs to look at the fridge situation. I fumbled around, from one cabinet to another and a few minutes later, still not exactly knowing how this actually happened, I was left with a bag of chestnut flour in my hands. I looked at it and started to scan ideas in my head. I had almost forgotten about this flour bought at the store a few months back.

I have a fairly large collection of varieties of flour, between spelt, buckwheat, whole grain, chickpea to name a few. Buying chestnut flour, however, was a first time. I initially thought that I would use it in a sweet cake, but following what seemed to have been the tone of our day, I changed my mind. Instead, I thought to prepare something savory to complement dinner. I was going to make un cake salé. 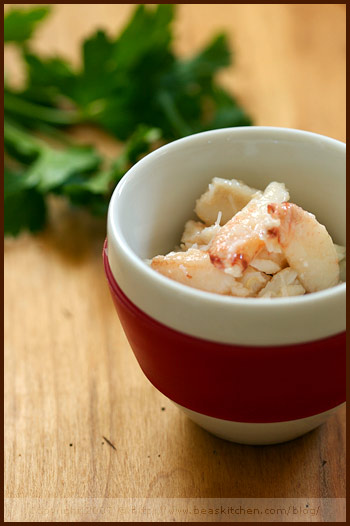 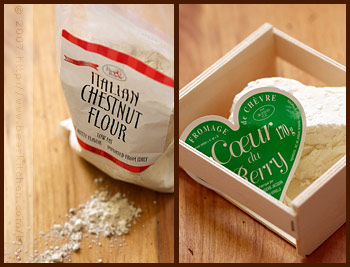 You might be surprised by this but the French language borrows English words, pronounced in the French way — you would be expected to laugh here if you were to hear some of these French Englished words because of the distorted pronunciation. These words, however, do not bear the meaning of the original English word. The word cake is one of these words. In French, un cake is commonly used although it does not mean a cake per se. Instead, it is a particular type of cake. Are you still with me? Un cake is in fact a fruit cake. From initially referring to a sweet food, the word however has stretched to other uses. Un cake salé (savory cake) follows the same idea but in place of the fruit, savory fillings are added: cheese, vegetables, meat, fish are a few possible choices.

With the bag of chestnut flour in my hands, I scanned my fridge and found a box of fresh crab purchased for another experiment, I had fresh herbs, pine nuts, scallions and a Coeur du Berry, an excellent heart-shaped goat cheese (Valentine’s day already playing tricks). I had in mind to make a savory cake that would be eaten as finger food, to go along with the leftover of vegetable soup made the day before, and to be used as the basis of sandwiches for our lunch the next day. Organizational thinking, you hear it well! It seemed perfect and it was. The best ideas always seem to come when you expect them the least. The cake turned out excellent, and as planned, I used it for sandwiches the days that followed: sliced, sandwiched with horseradish cream and smoked salmon, bringing an air of Scandinavia in our plate.

And so, what about the movie? The food needs covered, we thought of revisiting the idea and considered seeing it before it would no longer be playing locally. Worst case, wait until it shows up on Netflix. Staying cozily in. 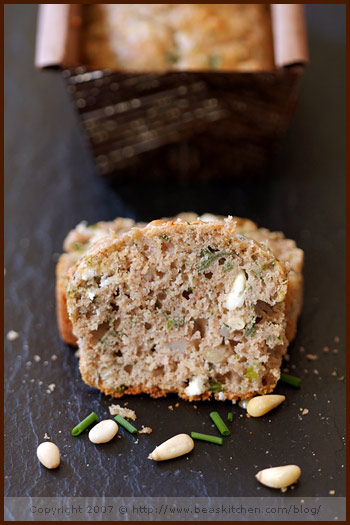 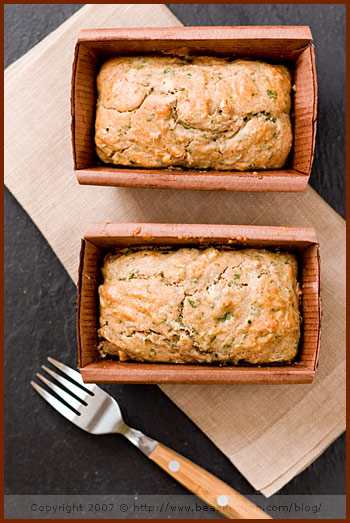