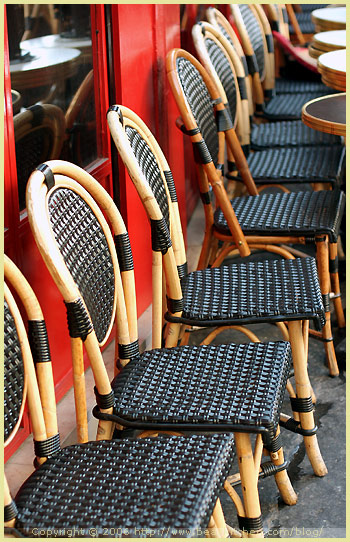 While living and growing up in France, I never visited Paris. Rarely, I should say. The 450 kms separating the big city to my tiny village were not even the excuse to explain it. Monter à Paris? (Go to Paris?) Mais pour quoi faire ? (to do what?) The French train network making it easy for anyone to travel within and outside France, the reason for this behavior found its origin elsewhere. Like many people living in a small village en province, I was simply intimidated by this impressing city. And for good reasons. My first time à Paris was on a school trip when I was thirteen. 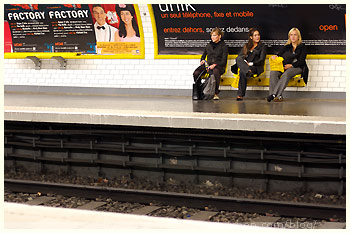 Beliefs that life in Paris is too fast and that there are too many people everywhere are no myth. At least compared to the quieter pace found in my countryside. Where do these people all come from? Y’en a partout ! (there are everywhere!) On the rare occasions when I would be in Paris, I remember feeling less smart, more poorly dressed while walking the streets of the capital, overwhelmed, thinking that a big sign with “je suis provinciale” (I come from outside Paris) was written in bright flashing letters on my forehead. I was young too and luckily, this uneasy feeling did not stay with me for too long. Things changed. I changed. I left France to live overseas and discovered bigger things, even more impressing than a city like Paris. All of a sudden, going to Paris became easy, a real piece of cake compared to the experience of living in a foreign country.

So, I started to appreciate the French capital and fall in love with it, like many, while living outside France. Passage obligé while transiting from my adopted to my home country, it has become a real ritual for me to stop in Paris every time I come back to France. My parents still wonder why I actually need to stop in Paris. Ils ne comprennent pas.

This time around being no exception, my recent visit to France included a short stop in Paris. After a relaxing week spent doing little and enjoying tranquil days in my home village perdu, I took the train back to the capital. After a three and a half hour train ride — of course, I slept for most of the trip, even if I still managed to take a few snapshots of villages when passing through the attractive Champagne countryside — I arrived at la gare de l’Est, ready to explore la capitale. 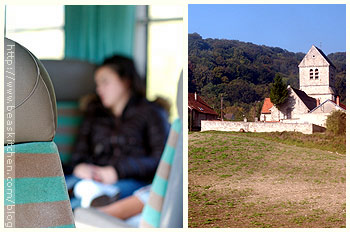 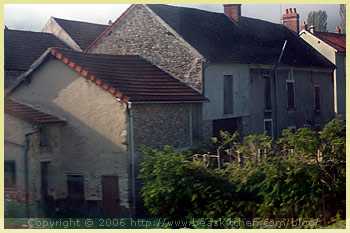 I had planned to spend a few hours shopping in the afternoon — watch out, Paris is a dangerous place for your compte bancaire (bank account) — , visit some of my favorite places, soak in the sense of space and culture, but mainly was looking forward to the evening. To do what? Meet two wonderfully friendly food bloggers for dinner, at a restaurant they recommended in the 5th arrondissement, Le Pré Verre. 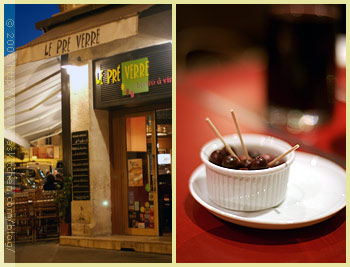 Pascale (C’est moi qui l’ait fait) and Marie (Gamelle Production) are just as nice as I imagined after regularly reading their foodblogs. Simple, spontaneous and full of life. We literally did not see the evening go by. Amongst the latest customers to leave the restaurant — and we only did so for the mere reason that we knew that the métro would close soon — we almost forgot about the lousy service. Or maybe it was the company of each other that kept us happy and entertained. And the food. We decided to order two appetizers each instead of a more traditional appetizer and main course association.

Run by the Delacourcelle brothers, Le Pré Verre is a contemporary bistrot conveniently located in the Quartier latin, close to Le Vieux Campeur. The food prepared by the two Delacourcelle chefs is original for its use of spices of all sorts, from the appetizers to the desserts. The associations can be surprising and make you travel through countries. Think star anise, piment d’Espelette, fennel. A typical speciality would feature un cochon de lait aux épices. I regretted not having tried a main course, because my appetizers were cold. And sometimes, I am just in the mood for warm meals. Nonetheless, the combinations of flavors were interesting and I would go back to try more of the original dishes. 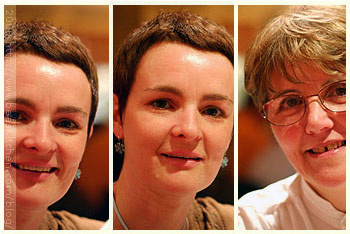 Our menu? Let’s have a look! 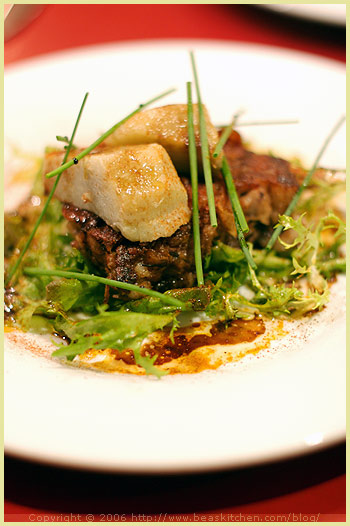 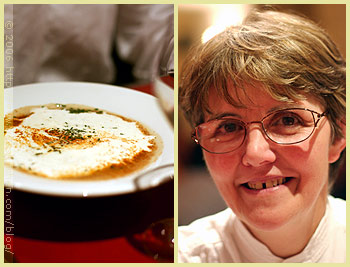 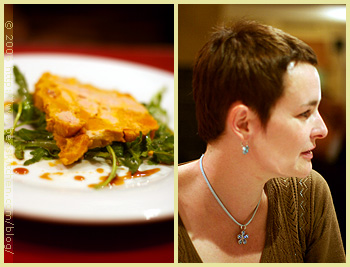 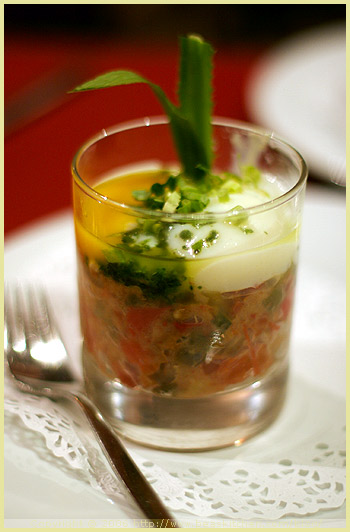 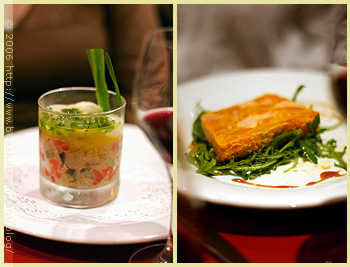 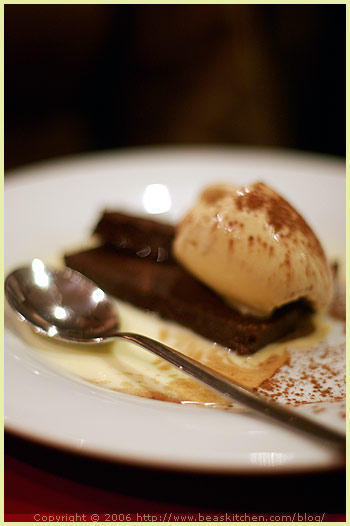 Dessert au chocolat (Chocolate Dessert), I actually do not remember the name, it was Pascale’s dessert 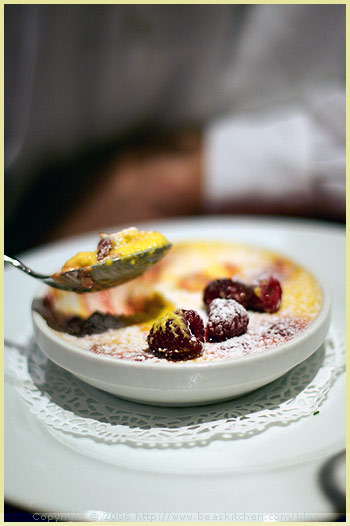 Marie mentioned that the clafoutis was served too cold, and she was right. I know that we would have appreciated the flavors better had the dessert been served, more likely, at room temperature. The important thing, however, was not necessarily the food. I was glad to have been given the opportunity to finally meet two lovely people that so far, I only knew virtually.

The following day, Gracianne (Un dimanche à la campagne) who could not come for dinner with us met me for tea at Ladurée’s shop on rue Royale, in the 8th arrondissement. I was pleased to finally meet the face and talented plume (pen) behind her so nicely written stories. When we walked in, I could not believe the line formed in front of the cake displays at this time of the day. It was 3 PM, on a Wednesday. Were all those customers there to buy un gâteau (a cake)? Luckily, not as many people wanted to stay in and sit at a table, so we had no trouble finding seats on the non-smoking second floor. Thé et pâtisserie could not be avoided in such a reference pastry store, and we both decided to choose a pastry classics, éclair au café for her, éclair à la vanille for me. The pâte à choux was extremely fresh and crunchy, cooked à la perfection with, for the icing, a thin layer of powdered sugar ….mmmm, what was it really? So different from what I had seen before on an éclair. On the menu, I read:

Of course, that explained the nice crunchiness on top.

Probably too engrossed in our conversation, will you believe me if I tell you that I forgot to take pictures of our éclairs? No evidence that they ever existed! Presque ! I only remembered when a few crumbs were left. The waitress came to clear the table and even asked me whether I was going to finish the little end left on my plate. “Pardon ?,” I asked her, surprised. I felt as if I could hear my mum say: Mais, tu ne finis pas ton assiette ? (Aren’t you finishing your plate?) 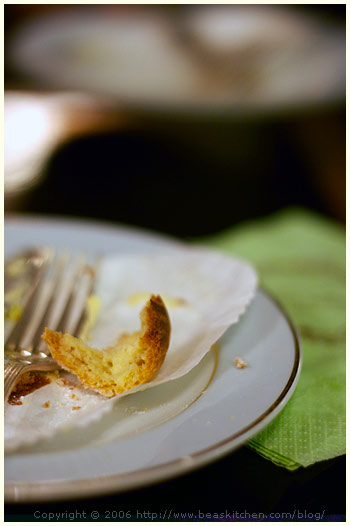 Les vacances, c’est fini, jusqu’aux prochaines ! (the vacation is over, until the next one!)

I am now back in Boston, and this story finishes the series of posts about my trip to France. Time to get back into more cooking again, I missed it, even if I was able to participate when staying at my brother’s.