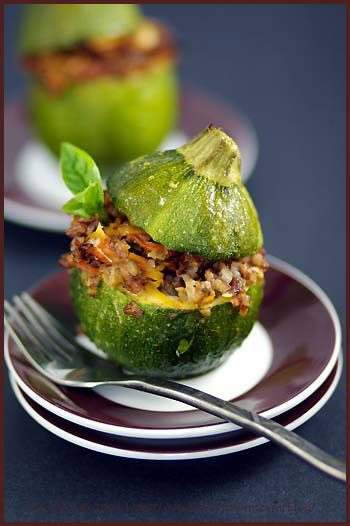 Last week, Helen from Beyond Salmon — everything you need to know about fish, she knows — and her husband came over for dinner. The simple scenario of two couples sharing a meal could simply mean a common evening, nothing that will be matter for discussion. Such evening however turned into an interesting mix because of the following: while Helen and I obviously have the food connection — and much to talk about –, P. and J. have the technology connection: Linux, Java, Database, architecture, blah blah blah. Now, one thing that needs to be said is that both of P. and J. are lucky to have wives that understand and speak their jargon — I am myself a former technology worker, happily former indeed — but of course, the fact that both of them could freely talk about code with the same passion as Helen and I talk about food helped in giving a perfectly balanced evening for the four of us. No yawns to be heard of. Helen and I would totally forget that they were there at times, and so did they. No guilty feeling. We were all happy. It were as if there had been two distinct streams of intense conversation that would converge once in a while. We ate well, drank plenty, and talked, talked and talked about what we each liked. While Helen and I were discussing what restaurants they had gone to while in the Seattle/Vancouver area — since we head there ourselves, of course, I was eager to hear more — what she cooked while they were there or what she thought about the local markets, at some point the question of where to find round zucchinis came in the conversation. Just like that. Pouf ! I hate to acknowledge it but I can be pretty obsessive when it has to me-wanting-to-find-something. I search until I find an answer. P. calls this nagging but I keep telling him that I do not understand this word. Je ne comprends pas l’anglais !

Back to the zucchinis.

Helen: Ah, you are looking for round zucchinis? But I saw them on Thursday at the farmer’s market in Belmont.
Me: Where? Really? If only I had known! Cool!

No need to add more. I knew already what I was going to do the following week. I was already thinking about the long wait until Thursday.

So Thursday came and I made my way to the farmers’ market, hoping that they would still have some of those round zucchinis Helen had mentioned. Approaching the few stands around, I could barely contain my excitement and rushed my pace to get closer to have a look at every possible green vegetable, trying to locate my round zucchinis. It took me probably less than thirty seconds after I arrived at the market to find them. I tried to be casual about it, but pretty much bought every single round zucchini from the farmer where I found them. I was just TOO happy to finally be in their possession. In my hands. 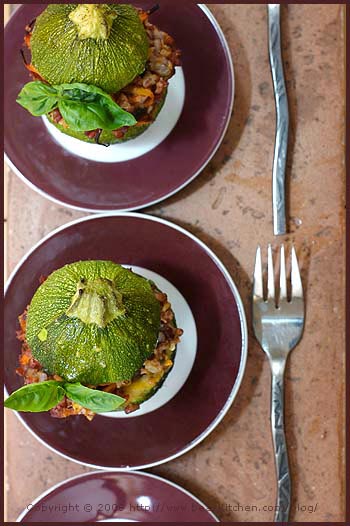 Back home, I inspected quickly what I had handy and a recipe was born. It would be mostly vegetarian, with une farce (stuffing) made of red rice, herbs and vegetables.

Have you heard about red rice before? And tasted it? If not, there is something for you to do. A pure jewel, just like black rice. I decided to use Buthanese Red Rice which I am reading was grown at 8,000 feet in the Himalayan Kingdom of Bhutan. Impossible de résister ! It is clearly impossible to resist its nutty taste and beautiful russet color. This red rice is a heirloom rice which is the perfect accompaniment to fish, meat and vegetables. As such, it worked perfectly in my zucchini stuffing. I added a touch of cumin and coriander and since I had plenty of fresh basil and tarragon in the garden, there they went as well. Sometimes recipes take time to be shaped and designed, sometimes they are fast to happen. “When there is a will, there is a way”. Quand on veut, on peut ! 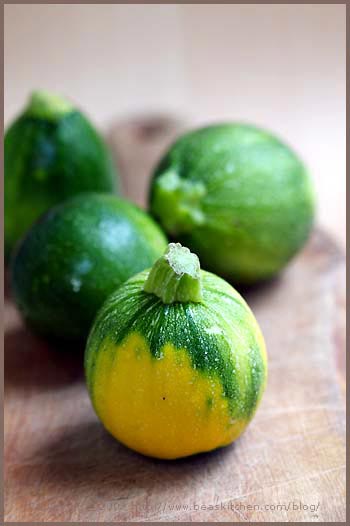 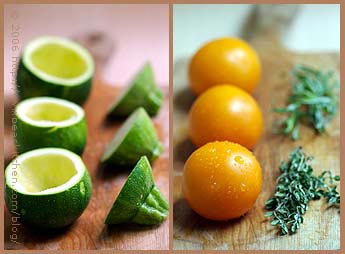 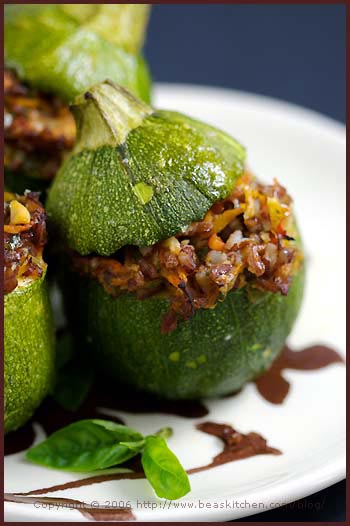 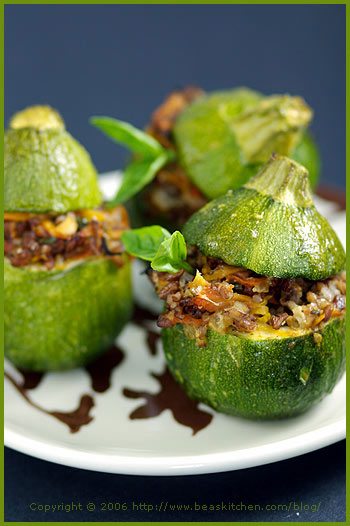