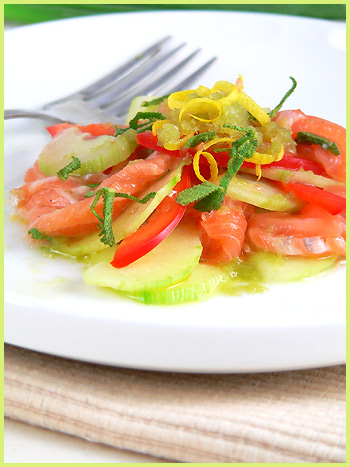 Still jet lagged of course but back. And you surely know what a jet lag means. There are only 6 hours between Boston and Paris but nonetheless. I wake up every day at 3 am starved and want to go to bed at 8 pm. Not to mention that I want lunch at 10 am! I arrived Friday and left a very hot Paris behind to find a very rainy Boston. Luckily the sun is finally back today! This weather is really n’importe quoi! (Whatever!) I think Spring was erased from the chart this year. Of course, I had a great trip (we all say that after a vacation anyway!) but it also feels good to be home, very close again to my own kitchen. Who could have thought that I would end up missing it so much? I brought back as many hard-to-find-in-the-US goodies as I could, so much so that as is usually the case, I felt like a donkey loaded with stuff! And I am not exaggerating: one of my suitcase weighed 15 kgs with only freshly-bought cookbooks and various ingredients. I prayed that customs would be sleepy and it worked.

And getting back into cooking feels like getting back on a bike after a long break. On my second night, I even was lacking ideas as to what to make. The first night was easy since P. made a ginger soup which recipe he found on my blog. What better compliment than that! I just loved that he tried one of my recipes, all the more as it turned out just fabulous, despite his saying it was not as nice as mine. Mais non! Délicieux je vous dis! (delicious I tell you!) After this trip, I feel rejuvenated (a break from cooking is good!) and I know that more cooking ideas will soon pop in my head. They already started since today’s lunch was a tajine of stuffed aubergines with rice and vegetables served with an arugula salad and rye bread, which made me feel like summer, but I am not yet up to picture-taking and such. As hard as it is to believe! So while this is not yet happening, I thought I would share a recipe I made before I left for France. If like me you love ceviches, tartares and carpaccios, this is a real treat. With it comes a delicious granita.

The Story of Granita, Granité in French

I think I will not be lying if I say that I discovered granita in the United States. Whether it is ice-cream or ice cubes themselves, I think Americans are much more inclined to cold drinks in general. Anything that involves ice. Take the example of ordering a drink in a restaurant. While most Americans complain about drinks not being properly chilled while travelling to France, most French people complain about the amount of ice found in a drink in the US. I hate to look fussy when dining out here in the US, but I always have to ask for my drinks without ice, which invariably puts more load on the waiting staff since they have to get me a different glass. I guess it would be like bearing a sign on my forehead that says “foreigner“. Those differences in taste have always amused me. And this one particularly because I just do not know its origin and why such are things. Aren’t we people of habits??

In summer though, granita is simply very refreshing and I am glad to have become familiar with them. Comme des glaçons parfumés pilés, mmmmmm! (Like flavoured crushed ice cubes, yum!)

So What Is It?

Granita is a granular dessert ice with a sugar-syrup base, usually flavored with fruit purée, coffee, or even wine. It is akin to but not quite the same as sorbet. What is the difference? Sorbets tend to be smoother and less granular in texture than granita, but both are made with water and a flavoring such as fruit juice. Granita can be used in the same way as one would a sorbet, between meal courses for example to “cleanse the palate”.

Making my granita with cucumber and Matcha tea was of course a twist to the traditional known sweet flavors, since my salmon recipe was savoury. The granita matched perfectly the marinated raw fish. Anyone who is into raw fish should surely try this set of new flavours. I really liked it! 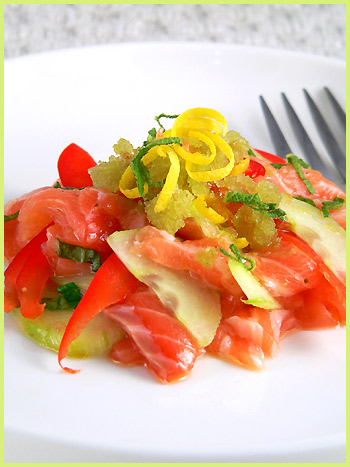 Raw Salmon with Cucumbers and Green Tea Granita
(for 4 people)
You need: 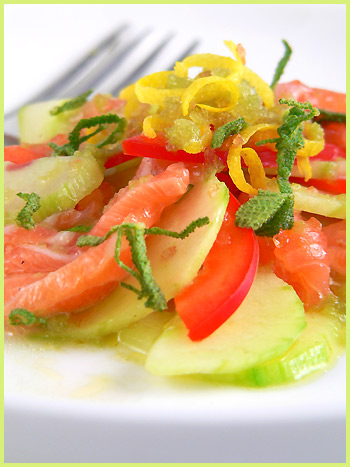