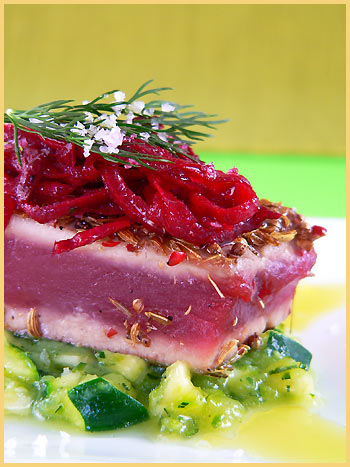 How about layers of colours and texture to celebrate Spring.

Did you remember today is officially Spring? I hope you did because in my family, things like this would never be missed! How could we? There were so many calendars at home, between le calendrier de la poste (the Post Office Calendar), le calendrier des pompiers (the Firemen Calendar) or le calendrier du club de foot (the Football Club Calendar). I don’t know whether this is a French tradition or what, but let me tell you, where I am coming from, I don’t know many French family households who do not end up, every year, with less than 2 calendars at least.

You end up with so many that you have no excuses to miss special days, such as March 21st, Spring Day!

I find it strange and funny to think how I came up with the idea for the dish that follows. I could think it has to do with the great seared tuna recipes I had seen on both Stephen‘s or Tami‘s superb blogs. Maybe. Or from Fred’s as it turns out that her most recent post presents a great seared tuna as well, le steak de la mer (the ocean steak) as she puts it. It could be those, or it could not be those. Still following me?

It was not! BUT it could have been. And why is that? Because I had planned to make this tuna dish weeks before, but was never able to due to a lack of my baby in the kitchen pantry, my pink peppercorns! So now that this major malheur (misfortune) had been solved, I was a happy girl and could fulfill my tuna dream. Pink rosé for the fish, fushia for the beetroot and pink for the seeds.

And what about a few words about the pink peppercorns. Let’s put things straight. In view of comments left by my dear readers, some expectations rose high as to what I was going to make with those lovely seeds. Here is the truth: this recipe is NOT the one for which I used my peppercorns first. I cheated and decided to present the tuna recipe first before the other mysterious one, just because I thought it was a more appropriate recipe for Spring Day. Of course, I was the only one to choose, so my life was easy. Let’s just say you will get recipe #2 very soon. How about stretching the wait. I truly hope not to disappoint anyone – and now I better not!-, such as Anita or Fabienne who seemed to be waiting for something sweet, soft, delicate, such as a to-die-for dessert! Sorry sorry! But my internal clock asked for savoury (besides, don’t you think I presented too many desserts these days?) I however truly look forward to trying the seeds in sweet preparations. As a matter of fact, I have an idea. What about asking Rob? He surely would have great ideas for this kind of chemistry since he is so magnificently experimental with alternative flavors in his kitchen laboratory! Let’s ask him what he thinks!

I hope you enjoy this steak de la mer. Il en vaut le détour! (It is worth stopping for it!)

For the fish and vegetables

For the coating of the fish

This is a great appetizer.

*Fleur de sel (Flower of salt) is a hand-harvested sea salt, very delicate in flavour. It is collected from the top layer of salt before it sinks to the bottom of large salt pans (Wikipidea reference). I find it a great addition for meals and use it very often. It should not be cooked but added at the end, once the food is cooked.

IMPORTANT SPRING NOTE: I had a second thought. Is Spring today or was it yesterday? I am confused. I need one of those calendars!!!! It is a pity that the firemen don’t come to sell calendars at my door here! Where are they? 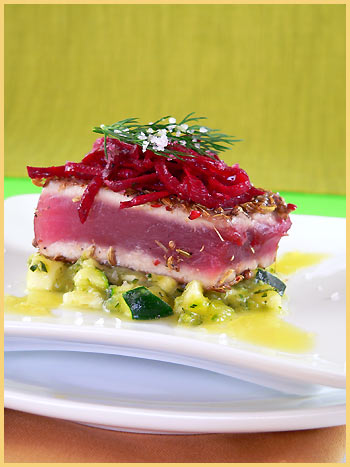