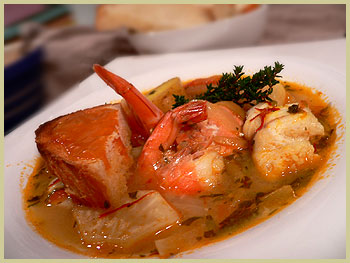 It is my friend AG who would be the most pleased about this post. I am going to talk about Marseilles, and AG is from Marseilles. Marseilles as most of you know is in the South of France and I am from the East. Now this difference is as big as talking about the difference between the Brits and the Irish, the bretons and the normands, New Englanders and Californians, New Zealanders and Australians. In the end, we all believe that we are the coolest.

Have you heard about a dish that boasts more variations than this one? There are as many recipes for bouillabaisse in Marseilles as there are des chefs marseillais. And as good franchouillards (Franchouillards are this species of French people who believe that anything French is better :-)), they all think their recipe is the coolest. I probably do too, I mean I make the best bouillabaisse! Ah! Except that I took a short cut since the *real* (who owns it, I want to know!) recipe is not your average everyday quickly thrown dinner. It requires time and most importantly a various number of fish from Marseilles!

Origin of the word

” Quand ça bouille tu baisses “ (when it boils, you reduce)… the heat that is. “Bouillir” means to boil, “Baisser” means to reduce, hence Bouillabaisse. This dish originates from fishermen in the Marseilles and Toulon area (and the beautiful Calanques area) with modest means. Every day after their day fishing, they were simply adding to a pot filled with boiling sea water all the fish pieces they were not going to be able to sell. They ate this fish broth with pieces of toasted bread, “croûtons” , with garlic and rouille or aïoli. This became quickly the fishermen’s meal, la bouillabaisse des pêcheurs.

Plats complets (one dish as a main) to feed a bunch of people, these are amongst my favorite dishes to make and eat. Live a leisurely life in a big house in the country with a lap pool, my vegetable garden and orchard, feed all of my friends and family members, and hear the crickets at night in summer, play pétanque and eat clafoutis at 4pm for le goûter, what a perfect dream life!

Back to reality. It is winter and it is cold outside.

I had to try myself to the bouillabaisse and make my recipe with major shortcuts as, even if we get great fish here in Boston, there is no way I was going to be able to find the fish you find in the waters around Marseilles. Promise to myself though: I will make the long version one day, C ‘est promis, juré! Si je ments je vais en enfer (I swear, I promise, If I lie I will go to hell). In the meantime, this one is just good enough. See AG, I am praising Marseilles and Pagnol, “just for you, and my stomach!” 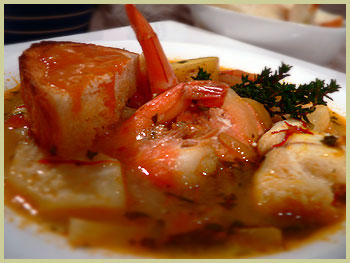