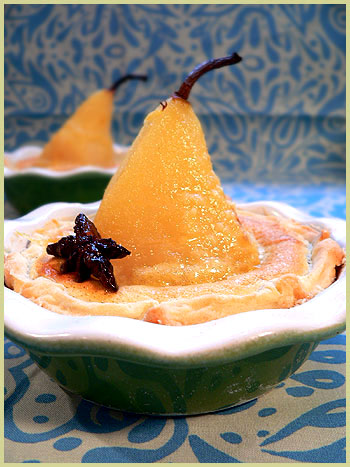 For the longest time, I had a very strong dislike for pears. The riper they were and the more I disliked them. I generally eat most of everything, food even on the verge to be trash-elected I have to confess, but that is mainly because of my crazy horrible I-want-to-lose-it bad habit of not throwing anything. I have been caught a few times with stomachache (yes really!) and promised that it would not happen again. But we all know the saying. Habit learned in a week, lost in ..how many? (I guess I do not know the complete saying).

Then I obviously could not but admired the beautiful Charlotte aux Poires made by Keiko from Nordljus, perfection at its uttermost. So one thing leading to another, I got fully inspired and acknowledge that pears have grown on me. Merci to Keiko, to a recently discovered beautiful food blog with a great inspiring name, A Perfect Pear and also to Philip, the little hubbie. Yes P. loves pears and always complains that there are no pears at home, or that I do not buy or cook them. “Allez, t’as pas envie de me faire cette tarte là, avec des poires ?” (Would you make this tart, please, with pears?) J ‘ai pas envie (I don’t feel like it). Until yesterday. I discovered a cute recipe in one my French cooking magazines, which I now slightly adapted and adopted.

The recipe seems to require many steps but it is deceiving as it is pretty easy and does not require special pastry tricks and skills. I did it!

For the pears and almond cream: 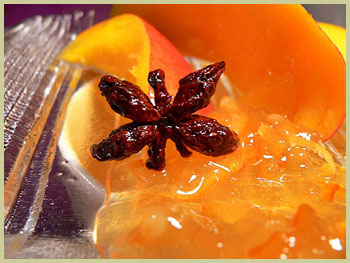 I had some leftover almond cream which I decided to use for another preparation.

Then came the time of the verdict. Would I be pear approved?

After P. started eating one bite of the tart, he looked up at me, with his mouth full. I was nervous. Suspense. Was I passing the pear tart test? His lips moved, I barely heard words coming out of this mouth, yet it seemed to sound like this : “Béa, hmmmm, I just have to tell you. Hmmmmm, from now on, this will become my favorite dessert”.

Can it be qualified of the most exquisite dessert? Not reaching the beauty of Keiko’s charlotte for sure but because Philip likes pears a lot, winning my family contest was quite easy (no one competed against me! ah!). Besides, P. had been pear-deprived for so long that I had high chances to win his approval . And I have to say, I liked it a lot myself and am ready to do it again. Tested and approved. I can declare : “J’aime les poires!” (I like pears!)