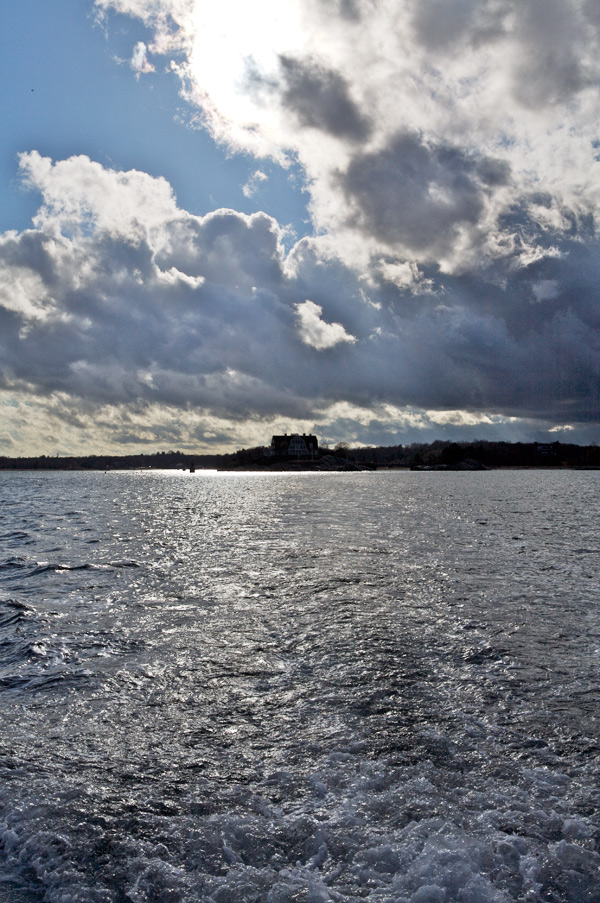 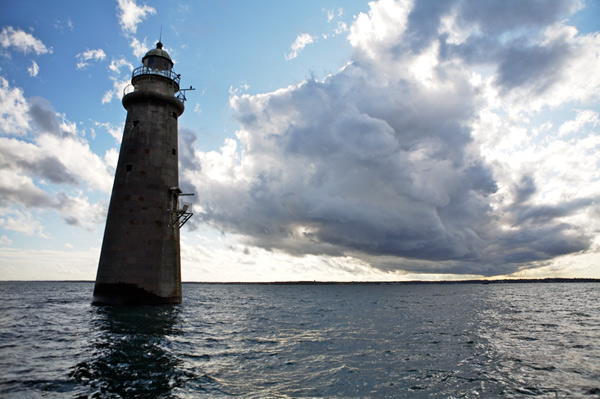 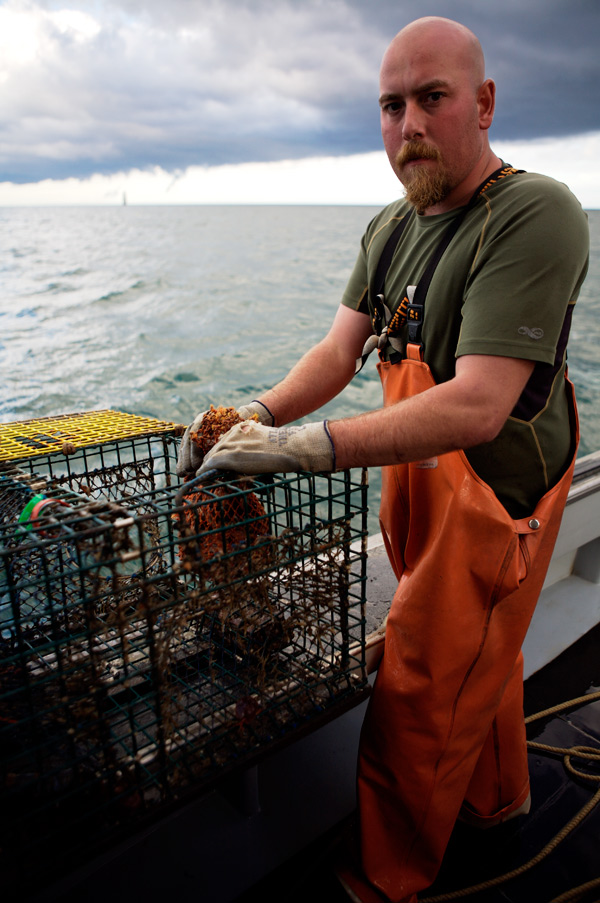 “You won’t believe this!” I exclaimed still lying in bed, busy checking emails on my Itouch. Lulu was just waking up, I could hear her babble in her crib.

“What?” P. mumbled with his head still tucked under the duvet.

“A journalist working for Envoyé Spécial has just emailed me!”

Perhaps like P., that won’t mean anything to you. But if you live in France, you are French or have grown up watching Envoyé Spécial (an excellent TV documentary program) the way I did, you’ll understand my complete surprise. And excitement. Delphine, the journalist who had contacted me, was working on a documentary about new food trends. She asked if she could interview me, hoping to come and meet me in Boston. The show, she said, would be part of a new format of the program called Envoyé Spécial la suite. 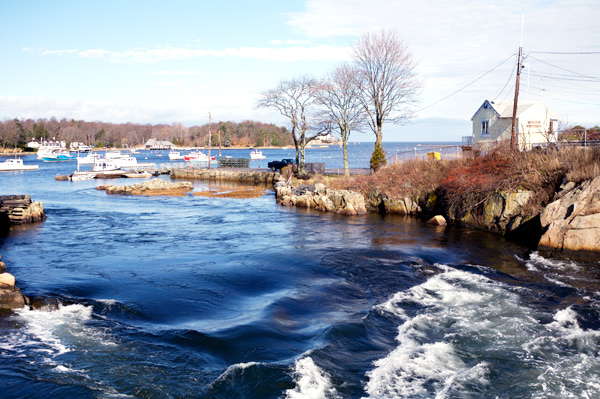 A few days after our first correspondence, though, Delphine wrote again to tell me that she and Cyril, a cameraman, were coming. I could not believe that it was actually going to happen.

“Sérieusement ? (Seriously),” my mother said, when I called to let her know. I must have sounded completely confused and unintelligible. Being on French TV? Never thought it could ever happen, especially in such an interesting program.

Quickly, Delphine and I picked a date and brainstormed ideas about what we would be doing while they were here. They’d be at home on a Saturday when friends came for dinner, they’d watch me in the kitchen while I cooked, styled and photographed a few dishes, and we’d go lobster fishing. I was very much excited about that part. The northeastern coast is always so pretty. And I was so pleased to be able to show it to them.

It happened last November, one week before Thanksgiving. 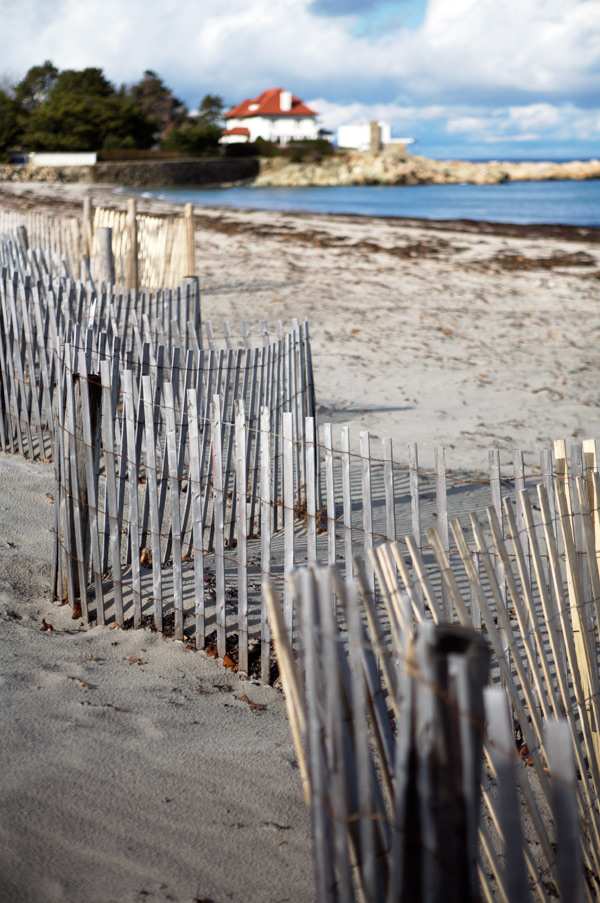 I remember that the week that preceded Delphine and Cyril’s arrival, I kept checking the weather forecast. New England in November, as you might know, isn’t anything like the Caribbean islands. I heard that up to Thursday, the day they’d arrive, it would be sunny–which it was–but then, there was talk of heavy rain. Right on the very day we had chosen to go lobster fishing. I was dreading it, hoping that whatever I had read in the weather bulletin would be untrue. These weather people, n’est-ce pas, turn out to be sometimes completely wrong. Right?

When I woke up on Friday at 5 am to nurse Lulu, it was indeed pouring rain. Heavily. Steadily. As I sat quietly in bed with Lulu and P. sleeping next to me, I seemed to be hearing every single heavy ugly droplet that was coming down against our bedroom window. If you had told me that we had magically moved overnight to a tropical island during rainy season, I would have believed it. “Ca va être désastreux,” (It’s going to be a disaster!) I thought, feeling nervous about the day. “Better bring Wellington boots,” P. said while I was getting ready. “That’s not funny!” I replied, aware that there was nothing to do but go with the flow.

I am not sure what happened then. Surely, that day, there was magic in the air. As Delphine, Cyril and I got into the car and started to head south, the closer we were to Cohasset, our final destination by the sea, the clearer the skies turned. Blue. Sunny. Ideal.

“Quelle chance on a alors!” (What luck we surely have!) we all exclaimed in chorus.

The day was amazing. Mild and sunny with blue skies filled with dramatic clouds that seemed to be hanging dangerously over our heads. Utterly picture-friendly. 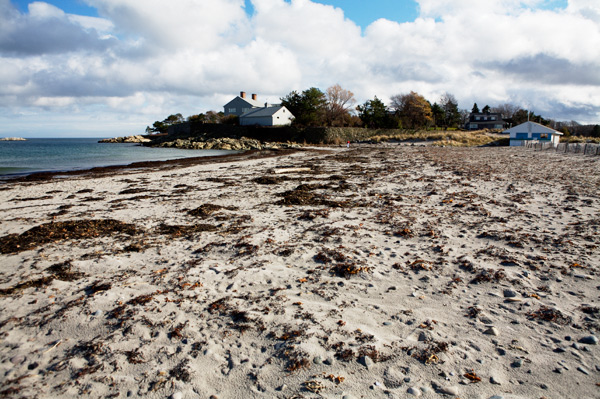 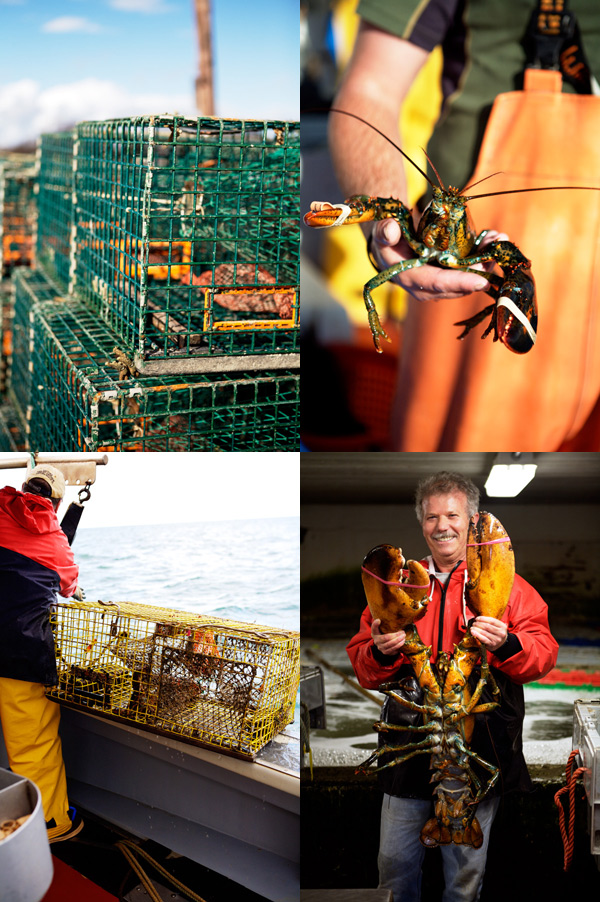 When we arrived in Cohasset, we met my friend Ron, who kindly helped to arrange our lobster day. With him, we visited Tommy, the manager of the Lobster Pound (I’ve told you about him already), before boarding a quaint–and cute–lobster boat in order to watch the routine of the lobster fisherman who had welcomed us. When we returned to shore, we headed to Atlantica restaurant nearby to meet the restaurant’s chef and enjoy an early dinner. With lobsters. What else? 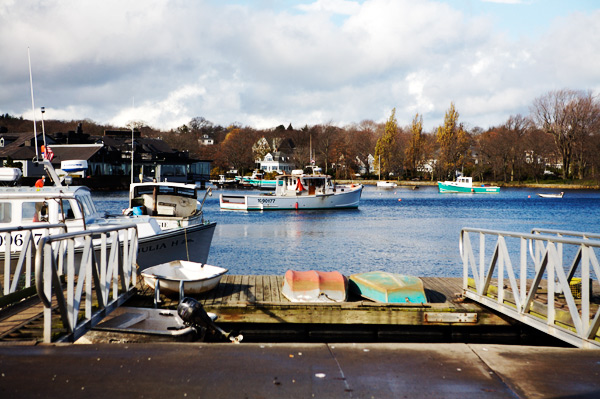 What I learned that day is that fishing lobster is hard work. No matter the weather, the fishermen are out at sea, fishing for a living, bringing to the table what most people consider delicacies. Fishing lobster is heavily regulated in New England to make sure that fishermen do not over fish. Each lobster that is caught is measured to ensure that it’s big enough in size to be kept. 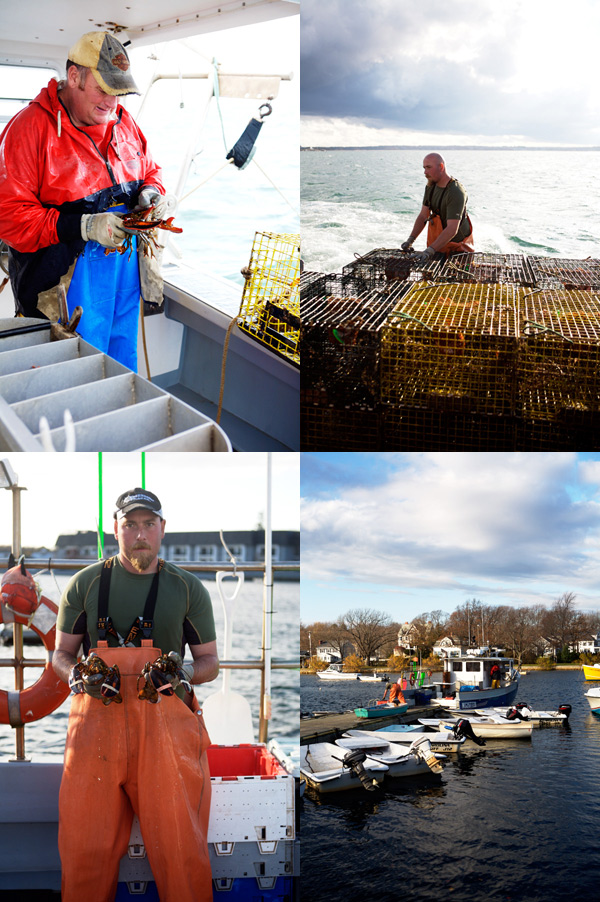 I came home, feeling tired but filled with delicious memories–like the delicious sushi and soup we ate outside at around noon, sitting by the water.

With a box containing six live lobsters in the trunk of the car.

“What are you going to do with those?” my mother-in-law–who had graciously flown from Chicago to look after Lulu while I was busy at sea and in the kitchen– asked, scared to touch them. “That’s dinner tomorrow,” I said. “No choice,” I went on, “we have to cook them now.” 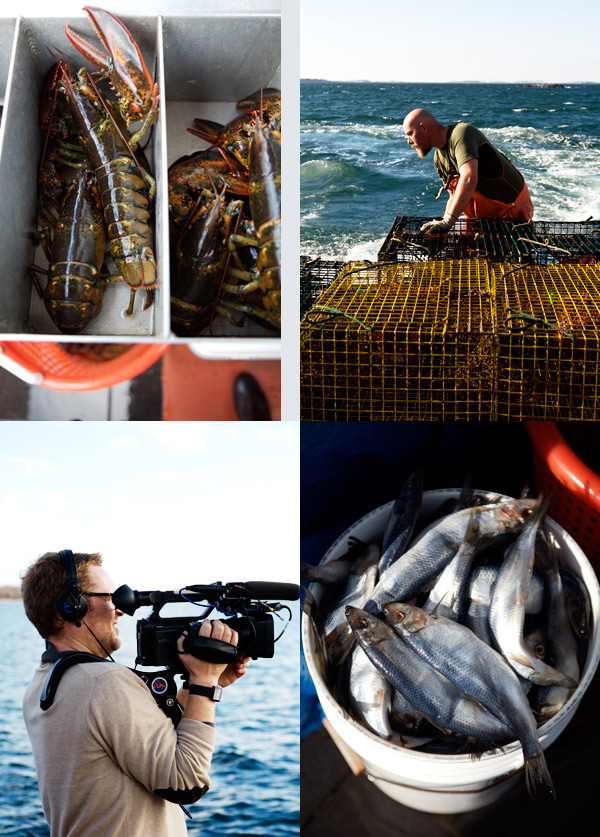 I think that if you could have been a fly on the wall, you’d have had fun watching the scene at 10 pm in my kitchen: moi completely frightened to drop the lobsters into the pot, but doing it anyway, and ma belle-mère (Mother-in-law) standing next to me with words of encouragements escaping from her mouth. “Great! Go Béa!” she repeated every time I dropped another lobster into the pot. “One more!” 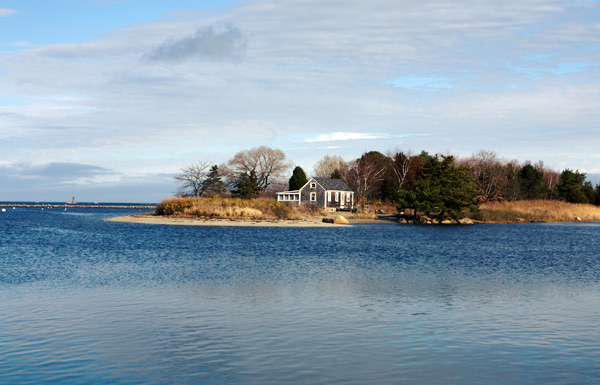 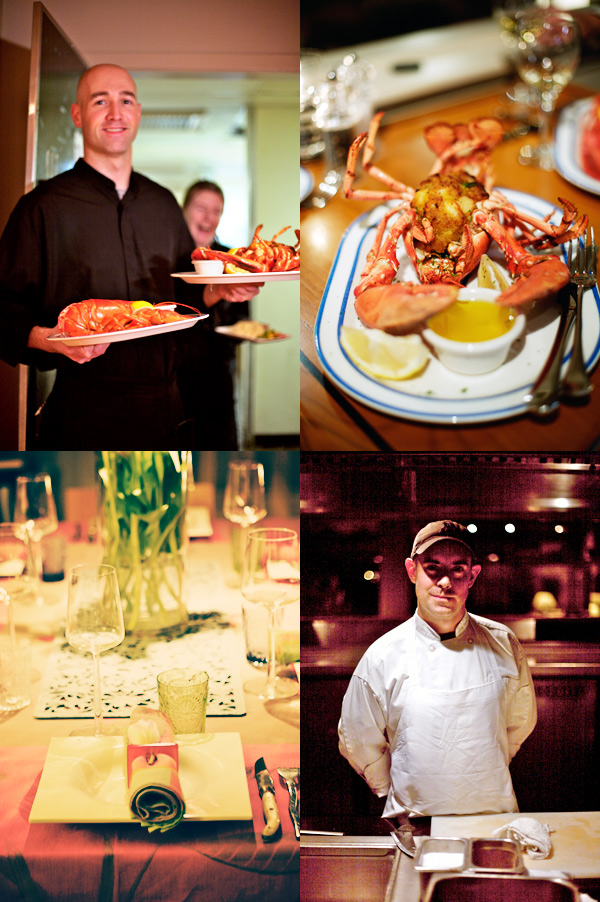 You’ll be able to see images of these two days (in Cohasset and at home) if you watch the Envoyé Spécial la suite program (in French). The show will air on the French television France 2, on April 3d at 2 pm (French local time). A video of the program will also be available on line . Follow that link. Check back to see when it is updated. I will let you know too. I have not yet myself seen the images, so it will be a complete surprise.

All I can tell you today is that it was an unbelievable experience. Both Cyril and Delphine were amazing. Friendly, welcoming, making me, P. and Lulu–who made friends with them quickly– feel comfortable. 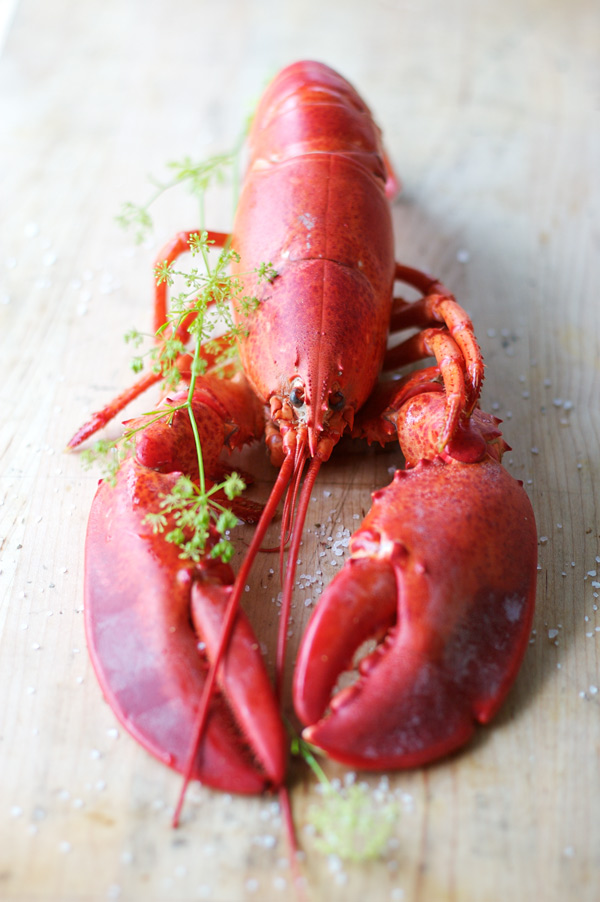 In the meantime, I’ll share with you one of the recipes I served for dinner for our friends on the Saturday, using the lobsters I had brought back home. It’s an appetizer you’ll also be able to find in my upcoming cookbook. 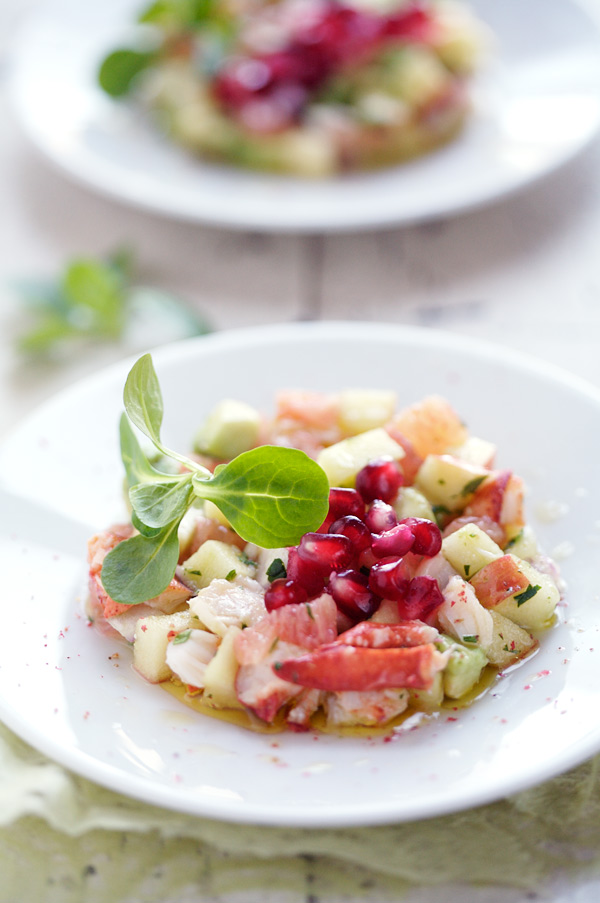 That night, we also enjoyed a butternut squash risotto with sauteed bay scallops and a drizzle of truffle oil, and I also prepared these raspberry tiramisu (both recipes in my cookbook too).

After all, this is simply an excellent way for me to test my recipes over and over.

Prepping food for our dinner 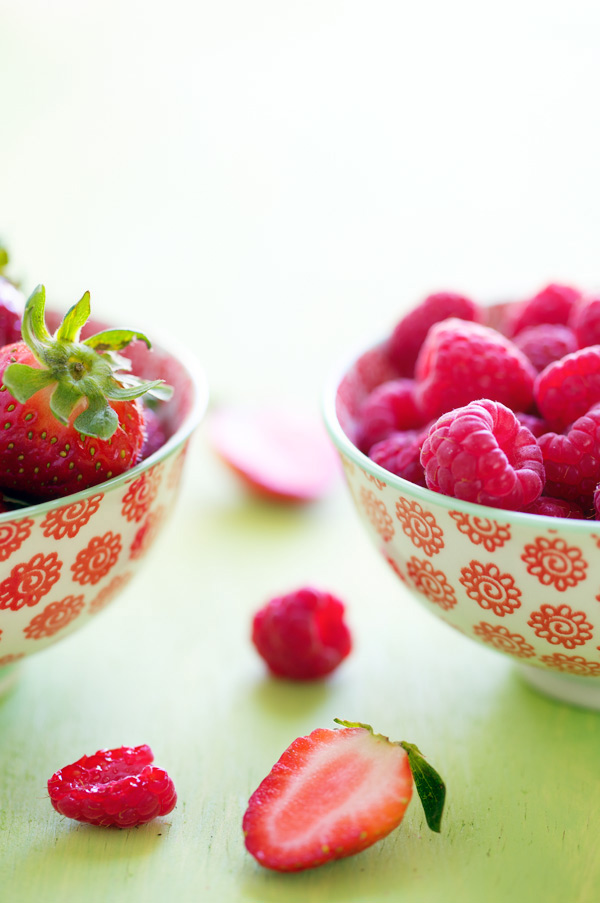 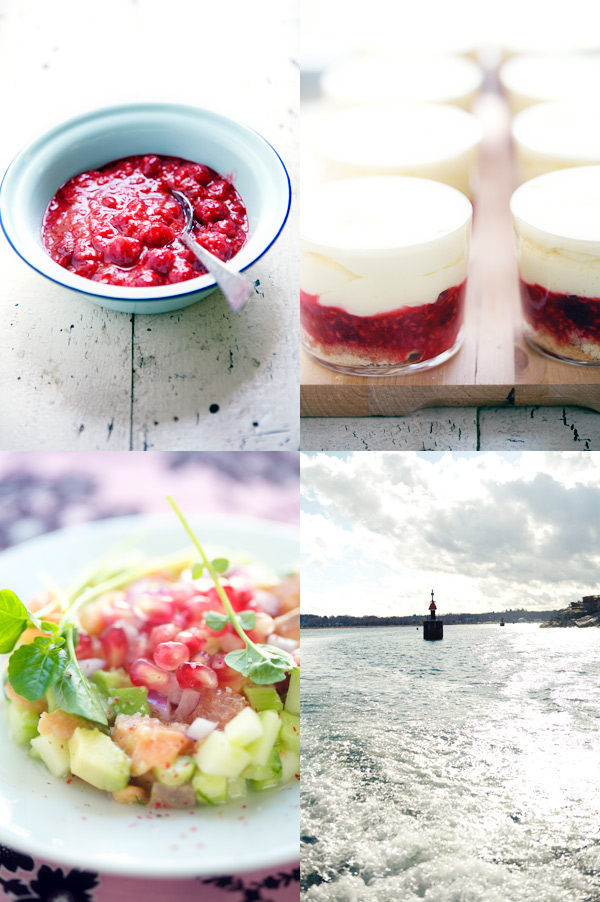 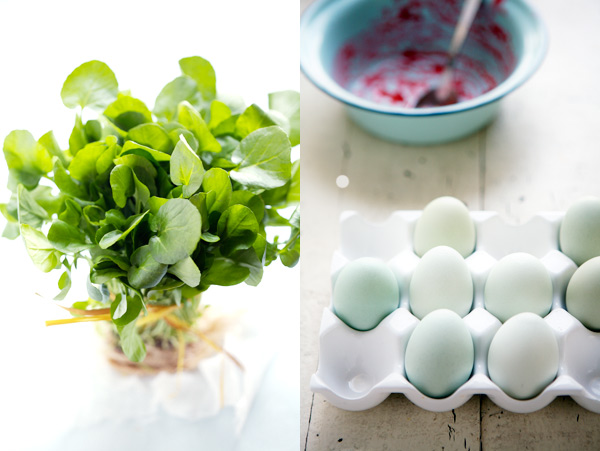 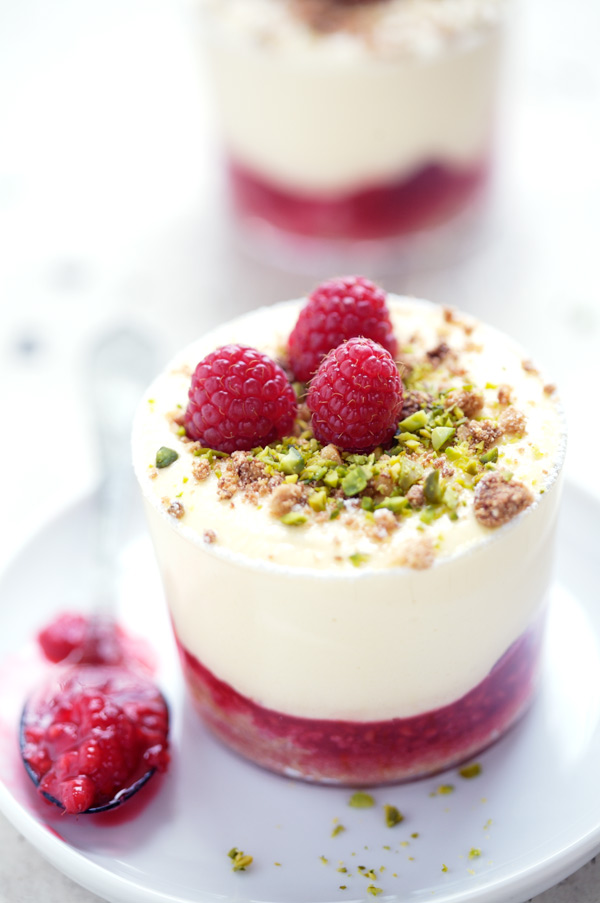