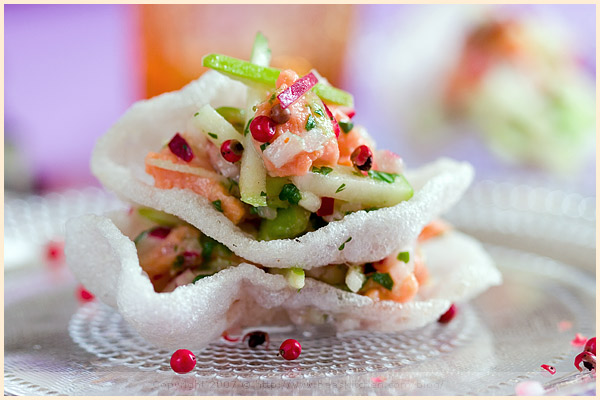 I can make this confession. I have a weakness for a type of junk food.

Or, is it really junk food?

It is all about a question of perspective, isn’t it?

In fact, no matter what it is, I do not even care. Or mind. I love to eat Prawn Crackers or Whatever You Call Them.

When I arrived at the specialized Asian store in Brighton by noon, I was really confident that it would be easy. I mean, like a real piece of cake. My plan was to walk into the large warehouse-looking store, scan quickly the shelf where lines of chips bags were kept, and walk out a few minutes later, happy with prawn crackers in my hands. A ten minute trip, not more complicated than this. And hopefully, I would not even need to ask any question to anyone. On my last visit, I had found out the hard way that only one woman spoke English amongst the staff, which ironically sounded like Chinese to me. I could hardly understand her. But as I walked through every single alley, looking carefully at each one of the shelves, I could not locate my crackers. Reluctantly, I walked back to the front counter where Mrs X. was busy talking to a few Chinese people.

“Excuse me, I am looking for shrimp chips (which I thought was their name),” I told her. She looked back at me somewhat puzzled, and so I repeated my question again. The second time, it seemed to make more sense to her. She took my hand briskly and pulled me over to a tall display loaded with stuff standing by the check-out.

“Ah no no, this is not what I want,” I then told her when her finger pointed towards a bag full of pink flat chips.”They are white and curvy. They melt in your mouth. Do you know them? I usually have them in Thai restaurants.”

“Do you make them?” she replied with a strong accent. Between mine and hers, we made a pretty odd pair.

“Make them? I don’t know. I’ve never made them before. I thought I was going to buy them already made.”

Her eyes lit up. She pulled on my hand again and started to take larger steps this time, almost running, and eventually dragged me at the other end of the store. There, she pointed towards a blue rectangular box with a large pink prawn drawn on it.

“This is what you want!” she repeated twice while shoving a box in my hands.

“Are you sure?” I said hesitantly.

“This is what you want!” she insisted.

Since it was so cheap, I did not think twice about it and left the store with the box in my hands. Feeling eager to see whether Mrs X. was right, I drove home as fast as I could. Next to Chinese — was it? — a few instructions in both English and French were written on the blue box, making me feel somewhat safer. I would at least have a clue as to what to do. Take a large pot, pour some oil in it and fry the prawns. But when I opened the box, it was my turn to feel puzzled. It contained nothing but one-inch transparent pieces that looked like mere hard plastic. Was it it? Just dip them in the oil and see what happens, I repeated to myself. With my eyes riveted to the pot full of hot oil, I started by dropping one piece into the oil and stood there, waiting. It landed at the bottom. After one min, the thing started to move. It rose to the surface and eventually opened, stretching as a cocoon turns into a butterfly. And, it looked airy and snow white in color. Thrilled, I started again. Faster this time, it happened again. Fall, rise, open, stretch, white-colored and light. Le bonheur ! (Happiness!) How I wished I could have given Mrs X. a hug at that very moment. She was right! I had found my favorite junk food — or call them prawn crackers — and would at last be able to adorn them with one of my second favorite pig out food, a Gingered Salmon Tartar.

It was about time! I had been waiting to make this amuse-bouche for quite a while now.

A few notes how I get inspired to create recipes and why I love this particular tartar: 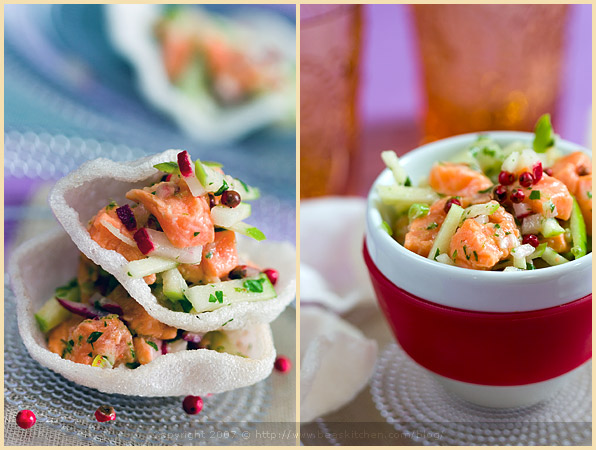