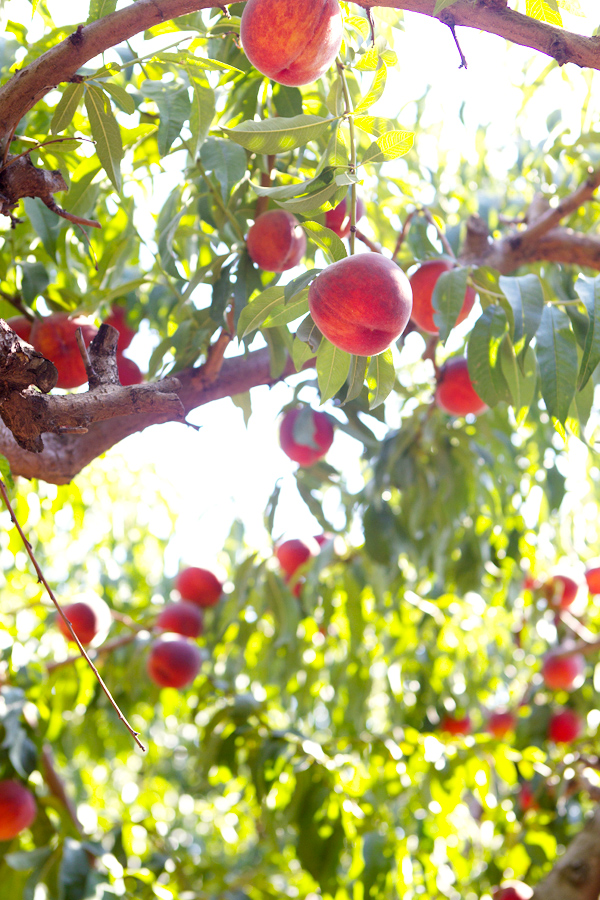 The memories I keep from Camargue are faint, I kept thinking as P., Lulu and I were silently driving on the highway that connects Marseilles to Arles. I found the air blowing through the window hot when it eventually landed on my skin. After getting up before the crack of dawn that morning for our cross-Channel flight from London, we were feeling tired too.

“Et en plus, c’est dimanche!” (furthermore, it’s Sunday!) I suddenly exclaimed, thinking about food. “Et demain c’est aussi férié !” (And tomorrow is a holiday too!) Which meant that every supermarket would be closed and we wouldn’t find much to buy for groceries.

I felt silly for having forgotten that part when I booked our trip across France.

But an hour later, when we finally arrived at our rental house nested between overripe peach orchards, it didn’t matter anymore. The area where the house was located was perhaps not the most beautiful or quietest we’d visited, but the house had an inviting pool and garden–and we were keen to have a swim.

So we had one. And another one. And when we’d had enough, we realized that we were starving and decided to take a short ten-minute drive to Arles for lunch. 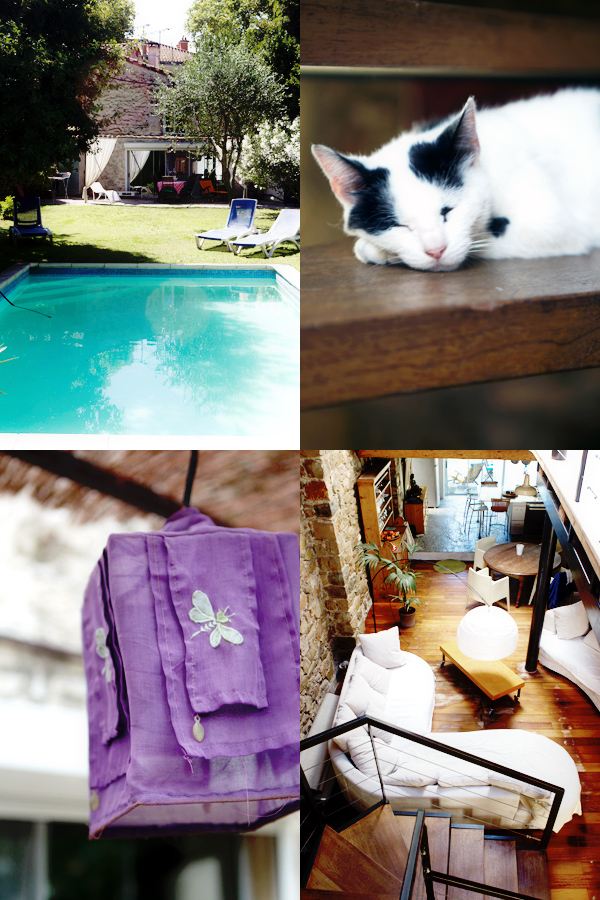 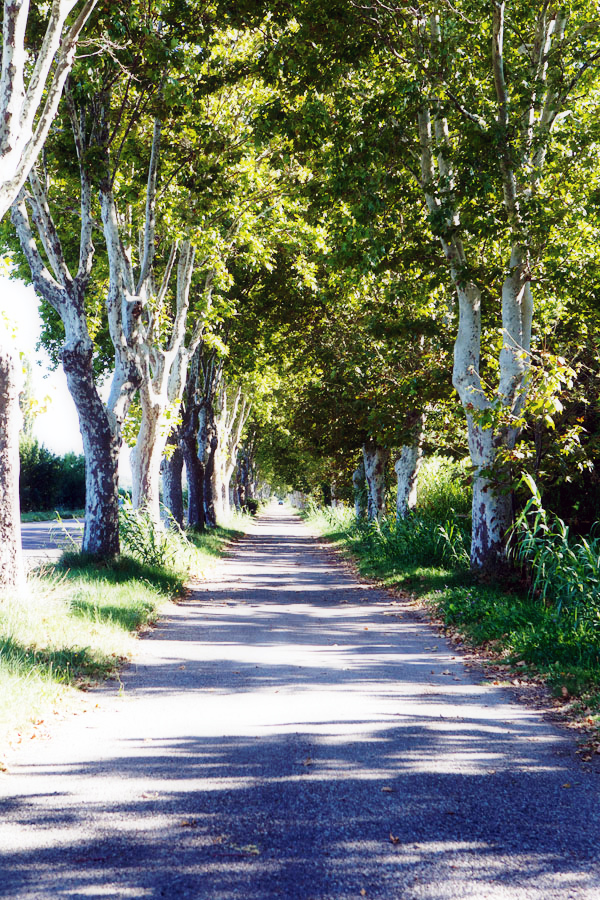 Arles, of course, is an amazing city. Its beautiful medieval monuments and strong Roman heritage enchanted me as it brought back scenes seen before in my middle-school history book. We could not help but notice the slower pace people followed as we walked the city’s numerous narrow cobblestone streets. “It must be the heat,” I thought. “Anyone would slow down.”

Once Lulu got a taste of what it felt like to be on a merry-go round arlésien, she would not stop. 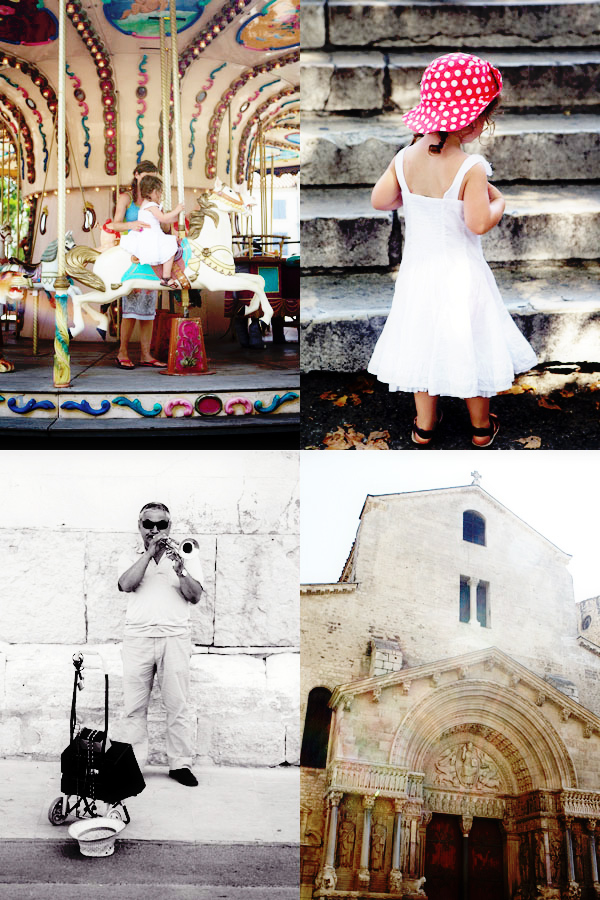 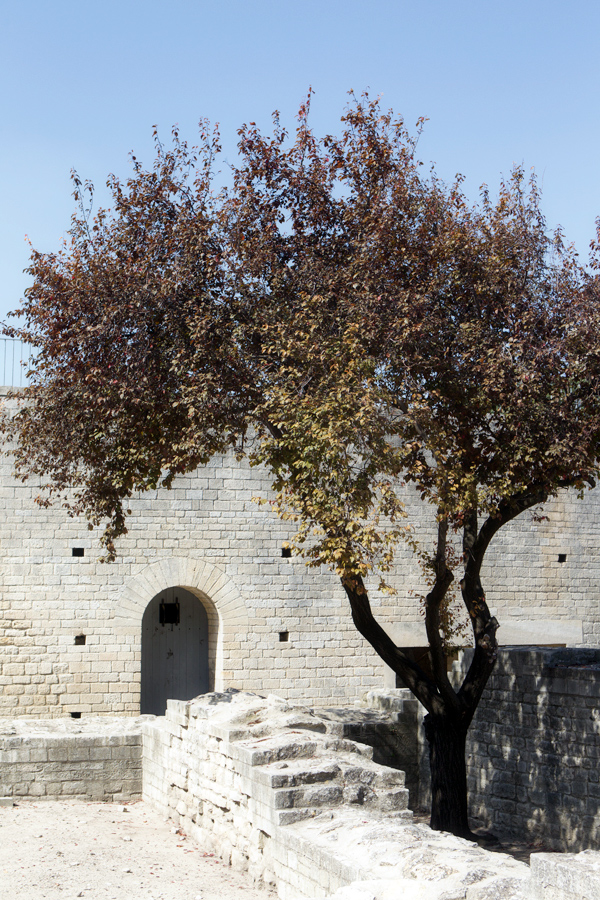 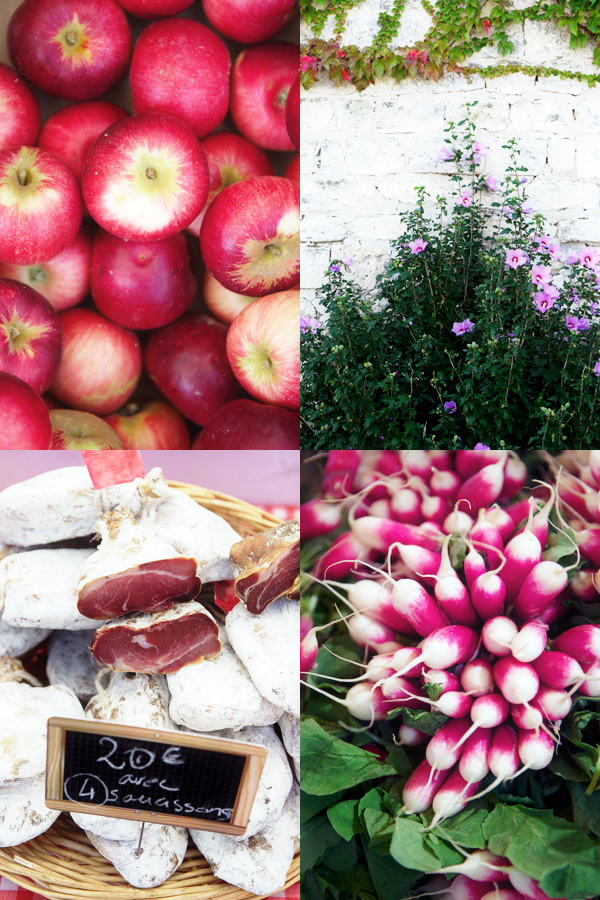 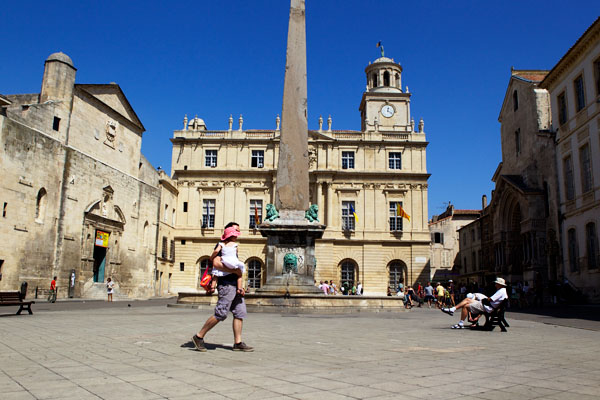 We arrived around 2:30PM, which seemed early enough. Yet, it took us a while before we eventually found a bistro still serving food. We lunched on salades composées, carpaccio and fries, with ice cream and berry panna cotta to finish. The food was helping us to relax into our vacation even more.

“Where am I going to buy groceries now?” I asked P.

“Wasn’t there a deli by the car park?”

He was right. I remembered now.

Held by a short and slim North-African man with a generous smile, the store was stacked up with spices, dry foods, a small selection of vegetables and fruit, cheese and a few cuts of meat. Enough for us to get by until Tuesday. I bought a bag of rice with zucchini and carrots, which I intended to cook à la pilaf in an improvised Moroccan style, with olive oil and spices. We’d have salad, eggs, cheese, bread and fruit too. 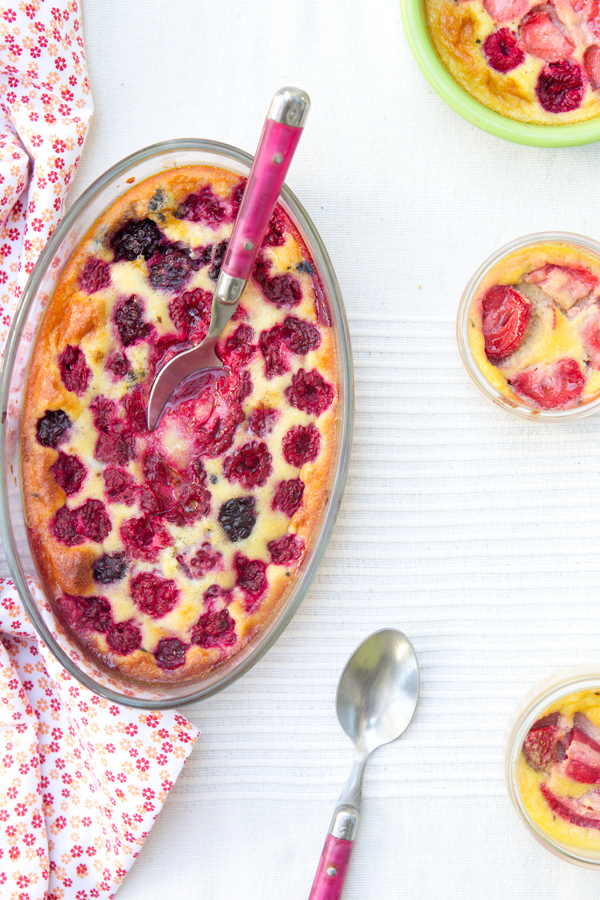 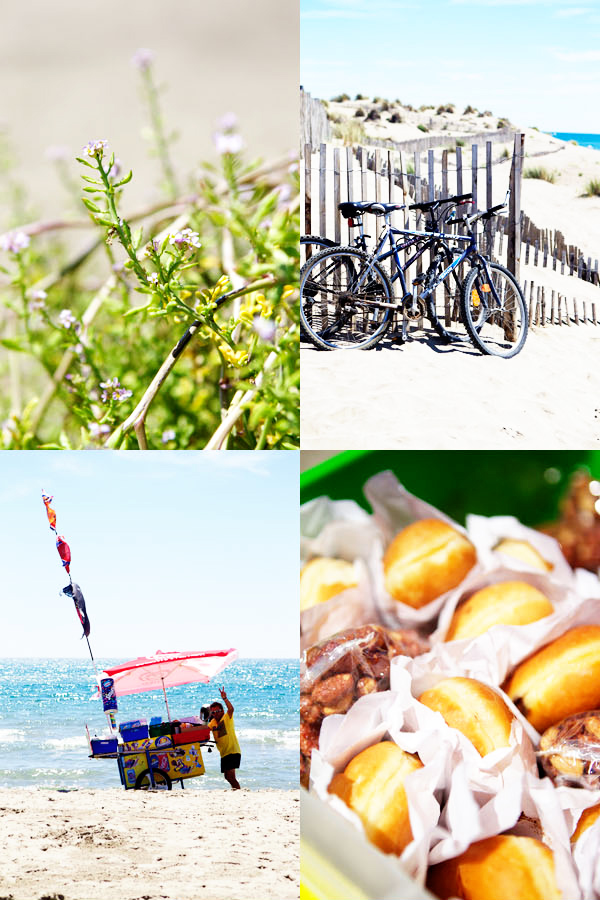 I visited Camargue for the first time when I was nineteen. My parents had decided that we’d take a short vacation during les vacances de la Toussaint in November. I was not sure I wanted to go then but in the end I went, and loved all of it.

I remember us taking long walks to visit local markets where we invariably bought fresh soft cheese, saucissons de taureau–for which my parents have a weakness–and summer fruit and vegetables. We sampled Muscat du pays and ate bouillabaisse sur le port (by the harbour). I’ve always loved that about French cities by the sea: the fact that they offer cozy cafés, bistros and restaurants to stop at for tasty local food. We also looked for wild horses and flamingos. 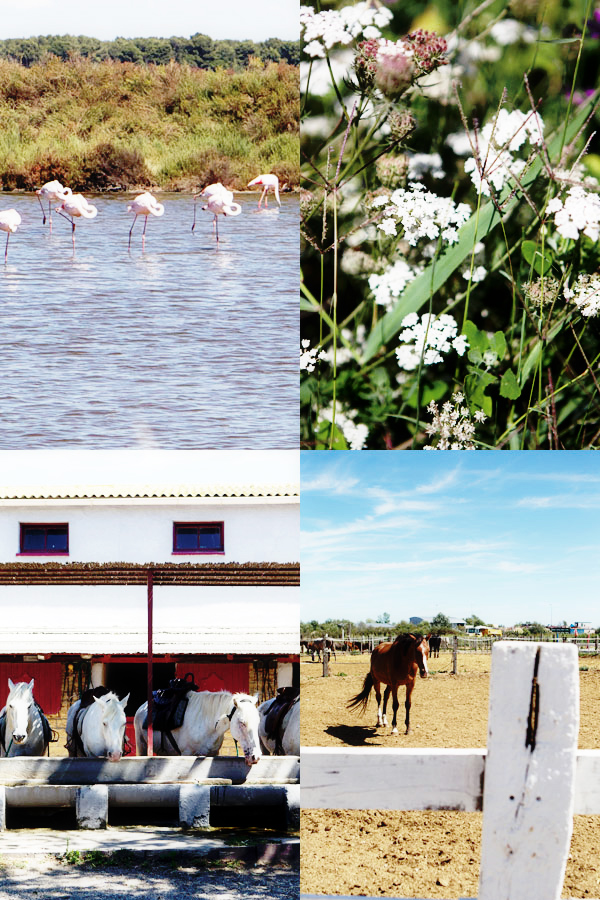 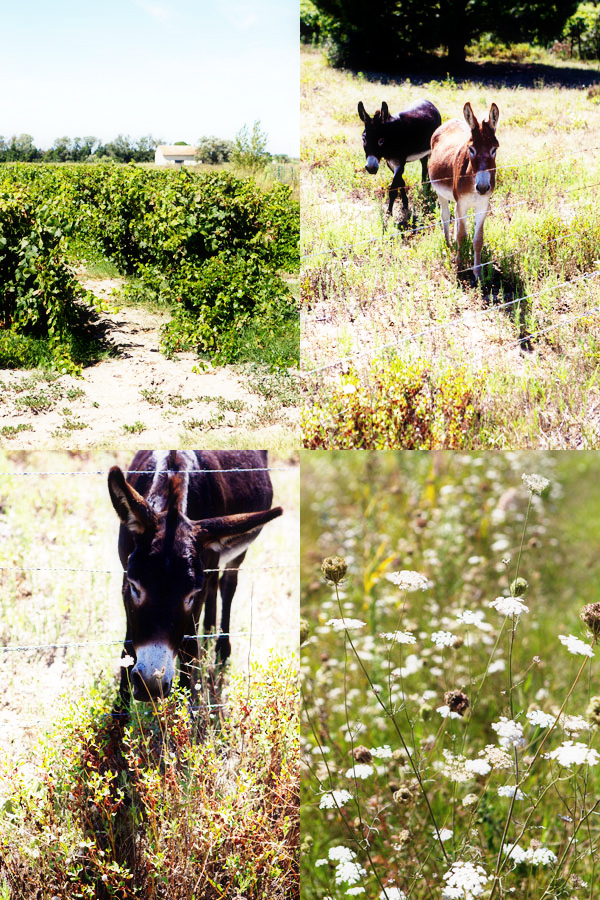 This vacation, I knew, would be somewhat similar. Yet different too. We’d be quieter and less ambitious. To fit Lulu’s schedule. To fit our desire to rest too. But with my parents again as they drove from Lorraine to meet us there. 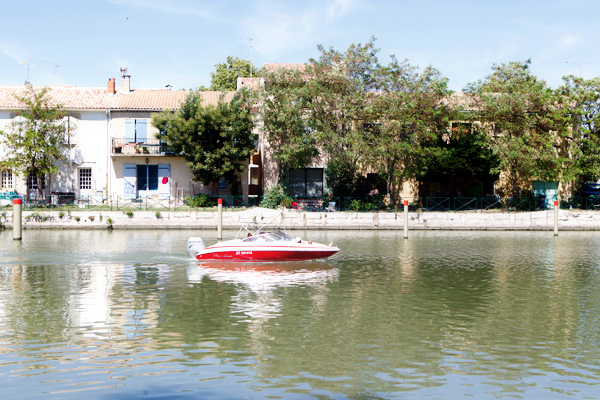 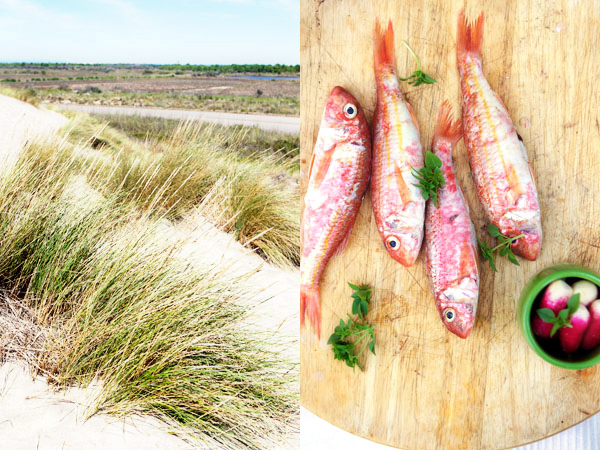 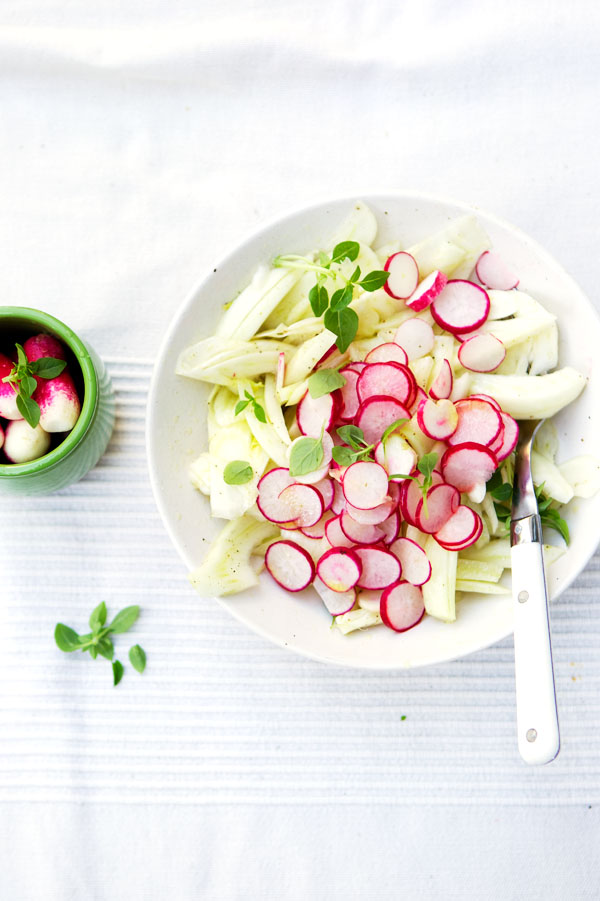 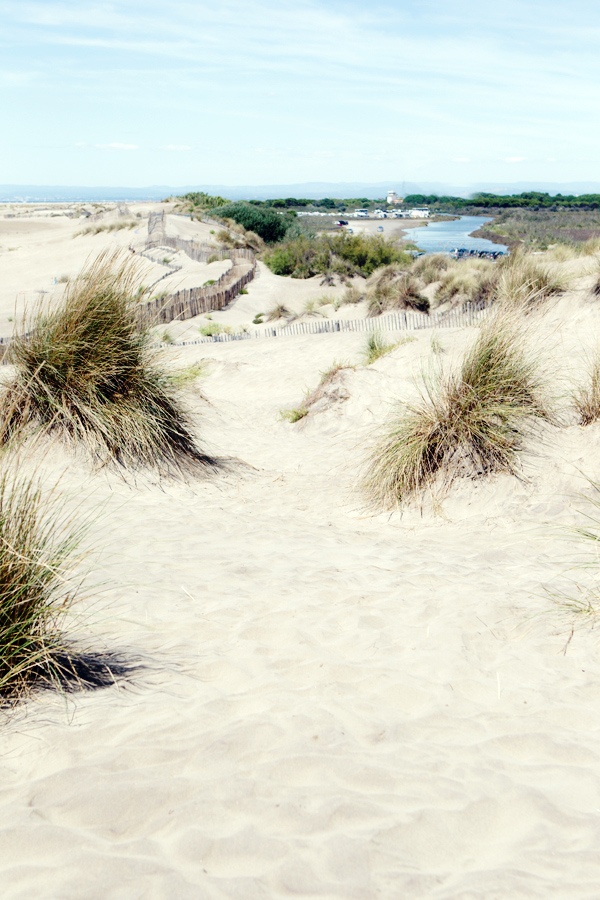 One day, we visited the immense Espiguette beach, stopping at Aigues-Mortes on the way. Despite the fact that it was summer, we didn’t feel the crowd.

Between mornings spent by the pool and naps, my mum and I cooked lunch. And dinner. We ate risotto, mixed salads and stuffed vegetables. We barbecued fresh rougets bought at the market and I even baked a berry gratin and a cake. Fresh, summery and simple. 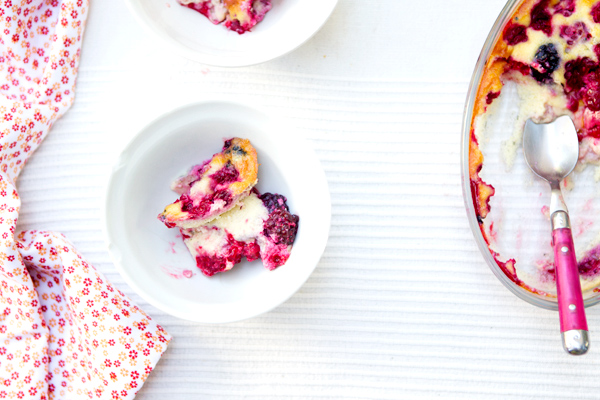 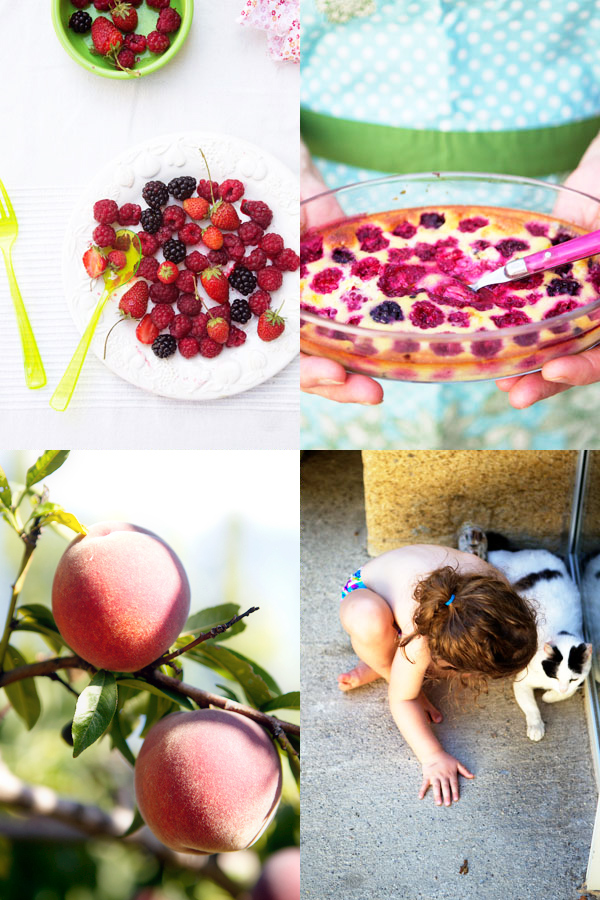 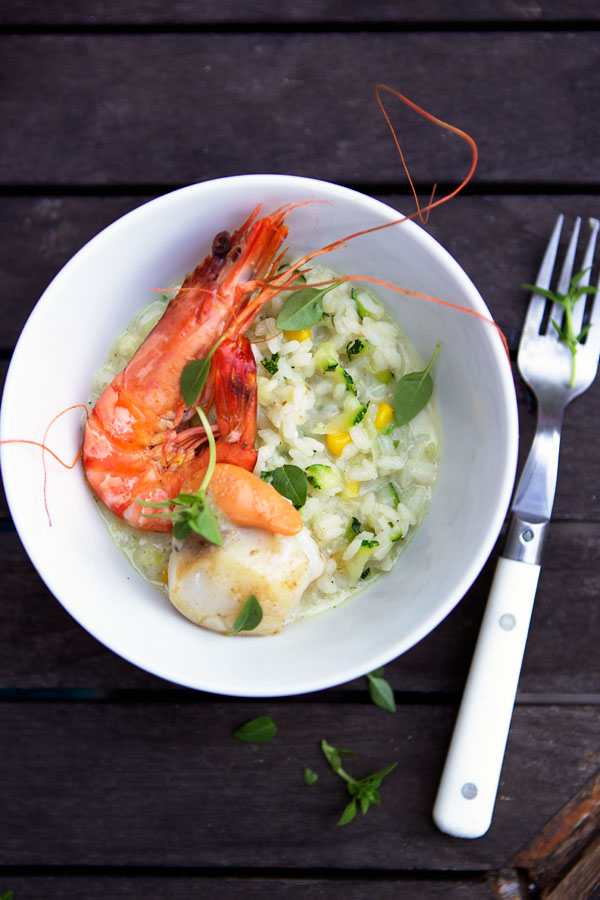 Zucchini and lemon risotto with shrimp 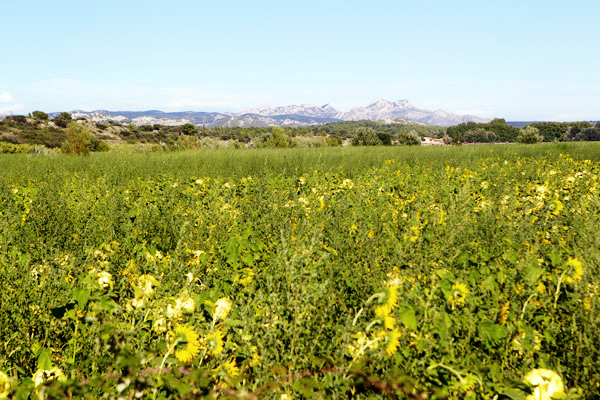 Another day, we invited my parents for lunch at L’Atelier de Jean-Luc Rabanel in Arles.

“C’est bon mais un peu trop compliqué pour moi,” (It’s good but a bit too complicated for me) my dad said. I laughed. I could see what he meant.

Rabanel received two stars in the 2009 Michelin guide, and was awarded Best 2008 Chef in the Gault et Millau guide. We chose an eight-course tasting menu with paired wines. Around the Vegetal theme. 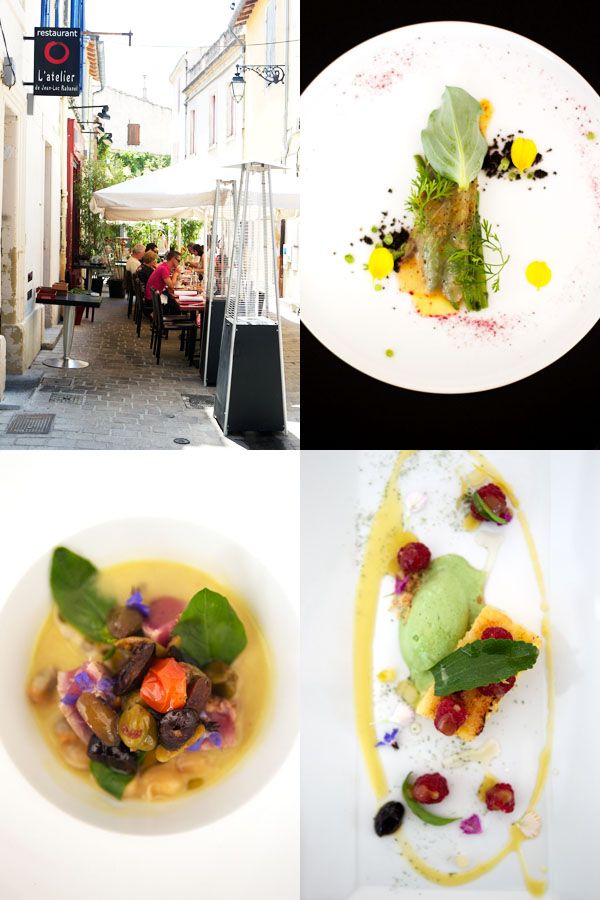 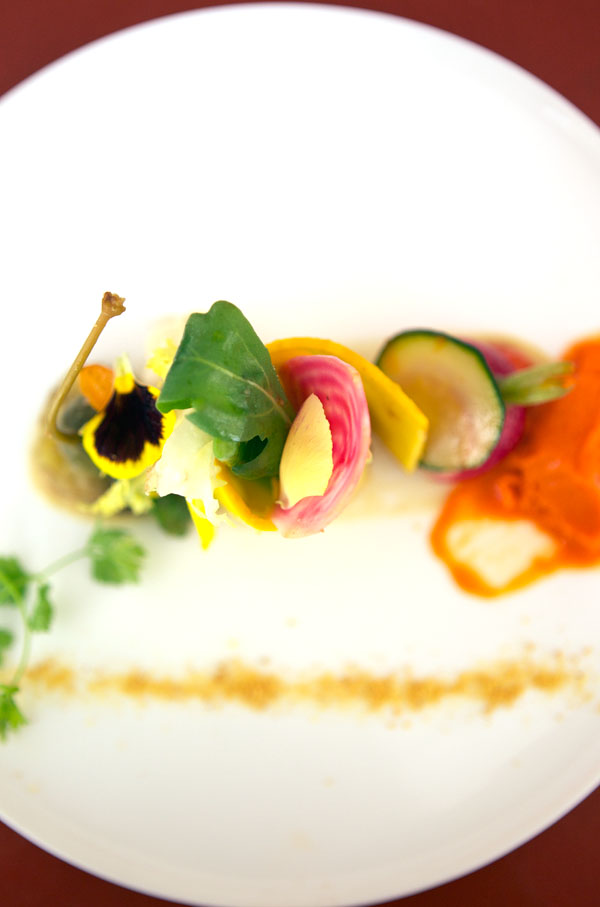 From seeing each plate brought to our table, I could understand that Rabanel’s goal was to combine cooking techniques and surprise with the flavors offered by each dish. I could also see why my father found our meal complicated.

I don’t remember every detail from the numerous dishes we ate–maybe it’s because of the wine. But I yet remember we started with paper-thin dark red beetroot chips, which Lulu decided were all hers. A tartine with its crunchy vegetables followed. Then we ate crunchy Camargue red rice with its garlic-flavored ice cream; a tuna and bean ceviche; a cut of veal served with rosemary-flavored jus and cooked-to-perfection rosemary-flavored fingerling potatoes; a surprising oyster-scented leaf (the leaf is real and literally tasted like an oyster). And we finished with a red berry soup with its almond milk emulsion (absolutely divine); a brioche cooked as pain perdu and served as a raspberry tartlet; and a panna cotta with fruit and preserved oignons perles. With tarragon-flavored ice cream in the middle.

I found our lunch exquisite and light. Delicate and floral. Rabanel’s food had undeniably inspired my cooking chord. 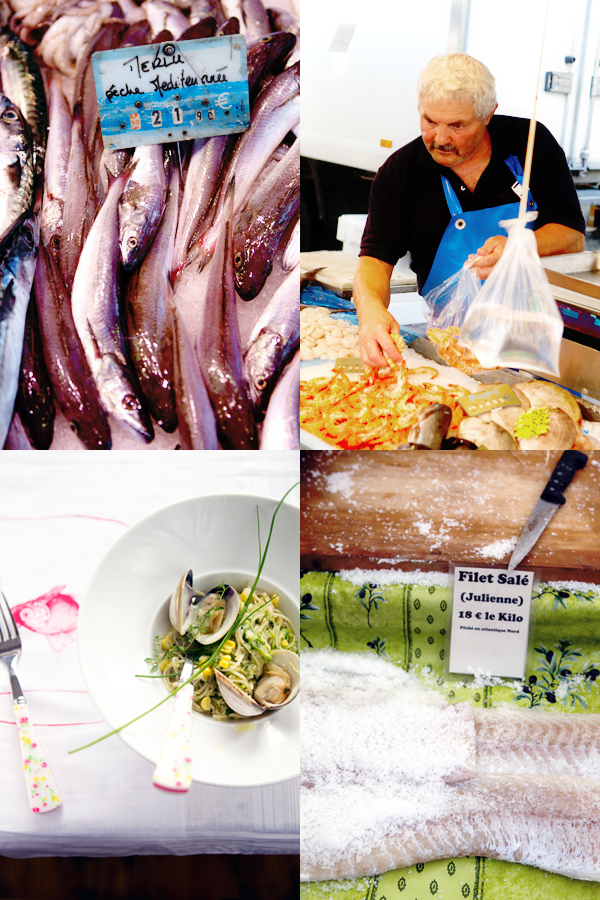 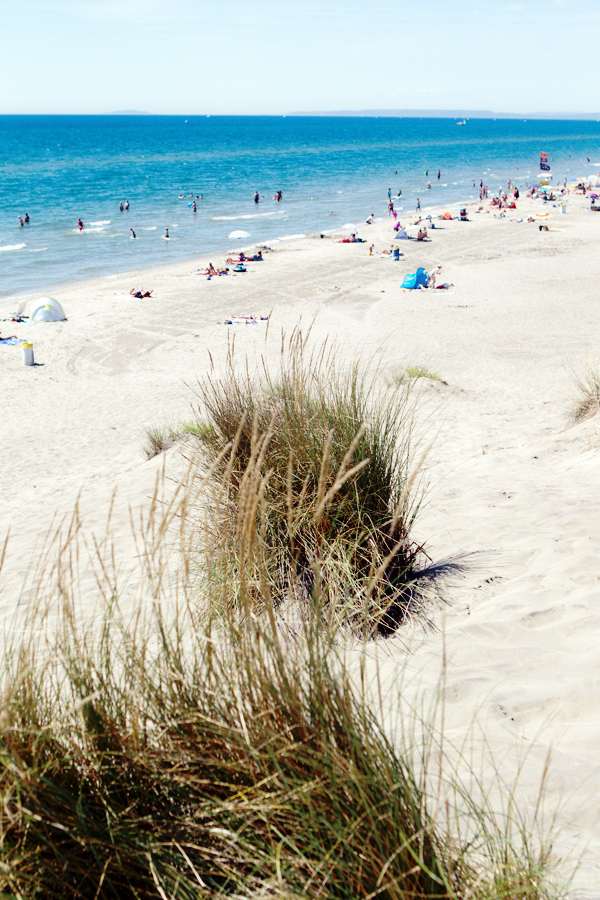 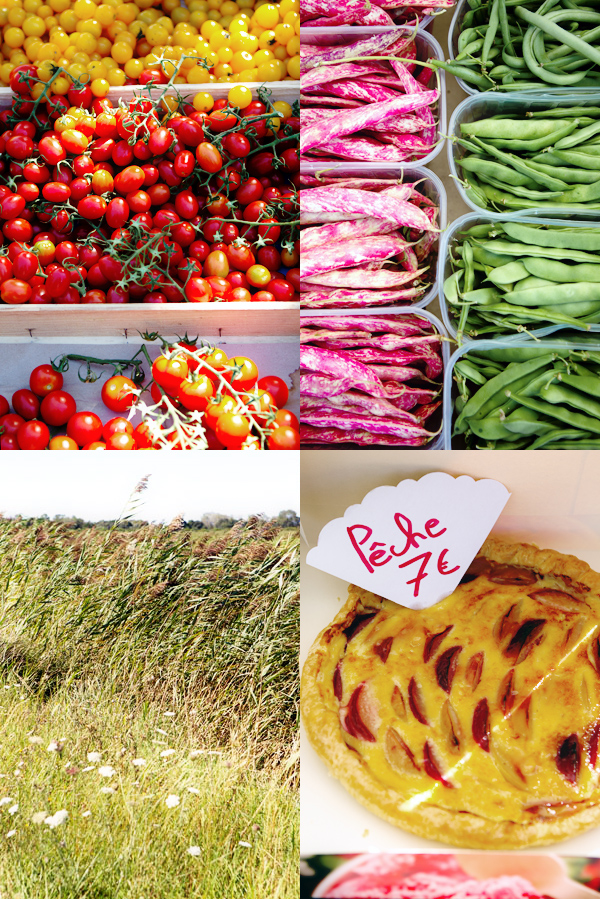 Scenes of the market in Camargue

One day, when we hit the market in town, I found cocos rouges beans. I could not get over their popping light fushia color. They were staring at me.

I took a bag and started to fill it with cocos rouges. I was so engrossed with the task that I almost didn’t notice an older man with a cane and light summer hat standing by my side. His upper lip was hidden behind a silver-looking mustache that shone under the sun. He was talking to me.

“Ils mettent combien de temps à cuire ?” (How long do you cook them for?) I asked, gulping down every word he was saying.

The man behind the counter was looking at us. Amused. 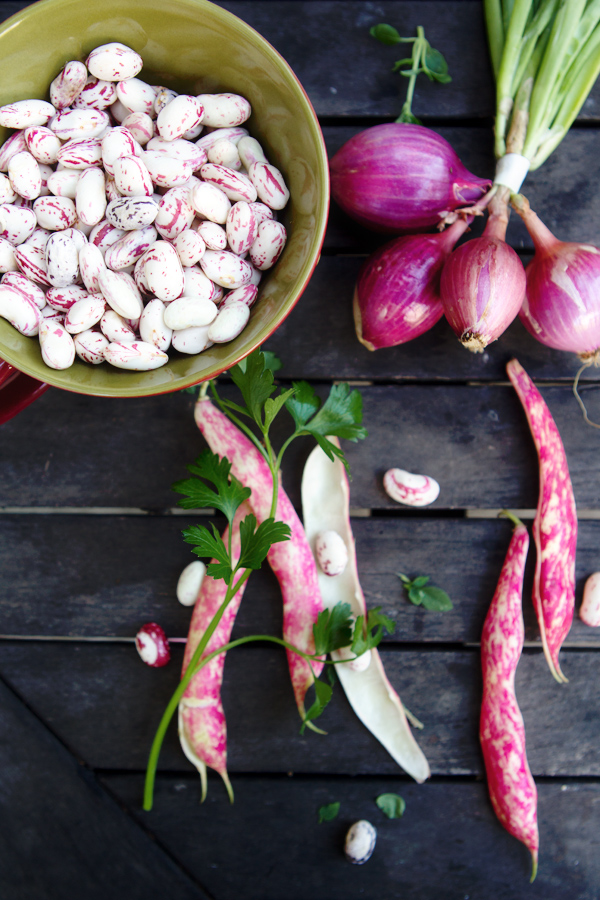 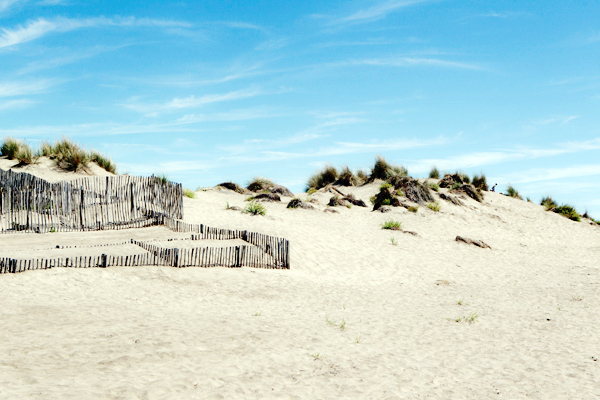 I was about to pay when I heard the old man again whispering something to my ear. “Pardon ?” I said as I stretched my ear to hear better.

“J’aime aussi y ajouter une saucisse,” (I like to add a sausage in it) he added with a gentle smile. His eyes grew hungry for the food he was describing to me. I closed my eyes and imagined how the flavors could mingle. It also made me suddenly hungry. 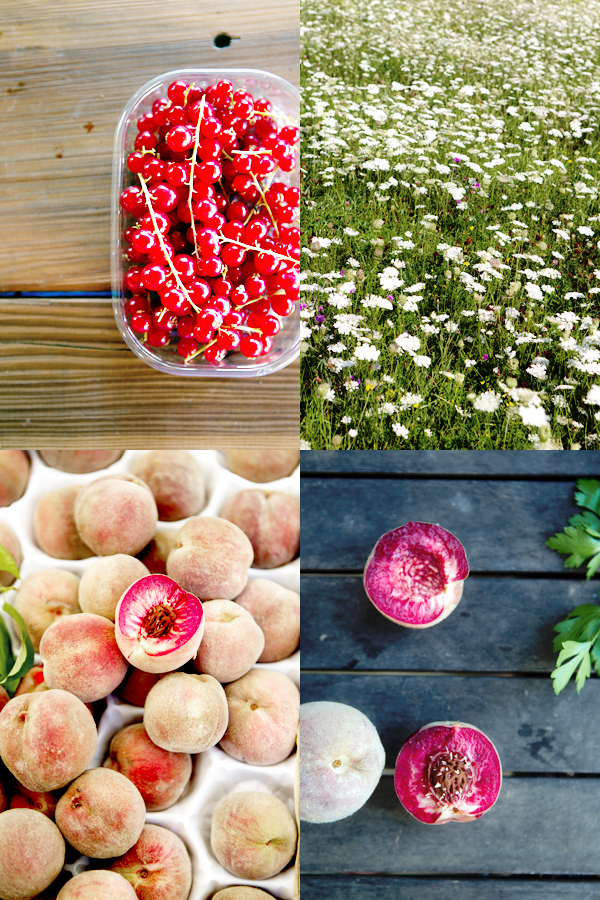 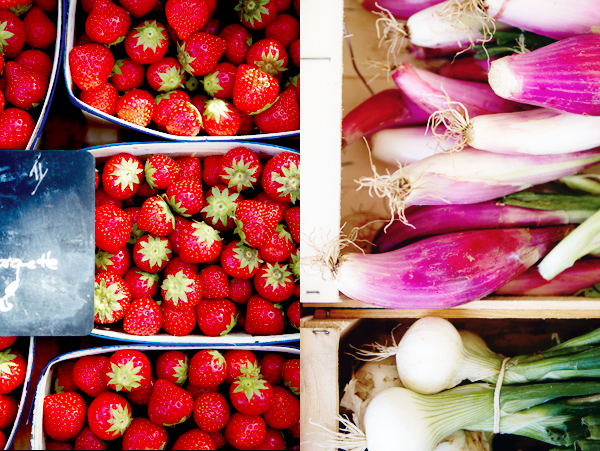 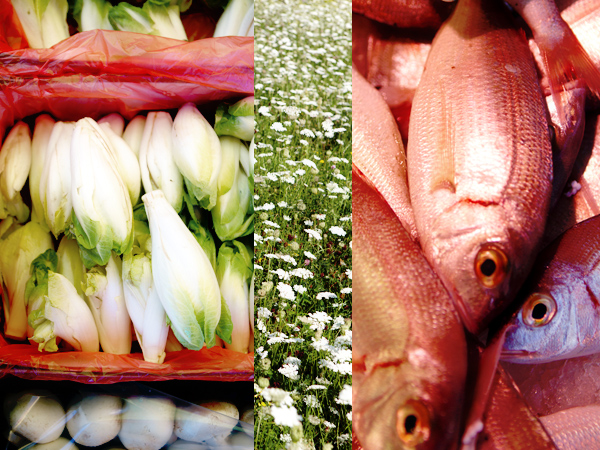 Lulu, P. and my parents were waiting for me at a café with a drink when I met them.

“I was talking to an old man about cocos rouges,” I said. He looked at me puzzled. I didn’t bother explaining then.

“I know what what we are having for dinner tonight,” I went on.

I was still thinking about the friendly face of the old man with his cane and mustache. And while walking to meet my family, I had improvised in my head the recipe for a potato and coco rouge salad with fennel, cherry tomatoes, mesclun greens and radishes bought at the market too. Except that instead of sausage as suggested by my old friend, we’d cook sardines on the grill. And have pêches des vignes with mascarpone cheese and honey for dessert.

And I knew that everything would taste like summer. The south of France and Provence.

A lovely time away.

And that it would leave me with the memory of my new old friend met at the market that morning. 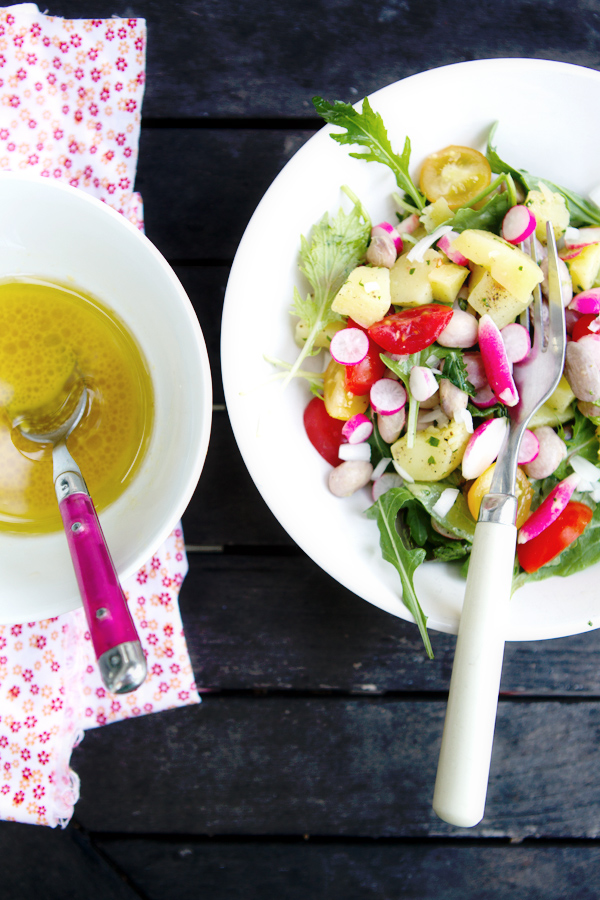