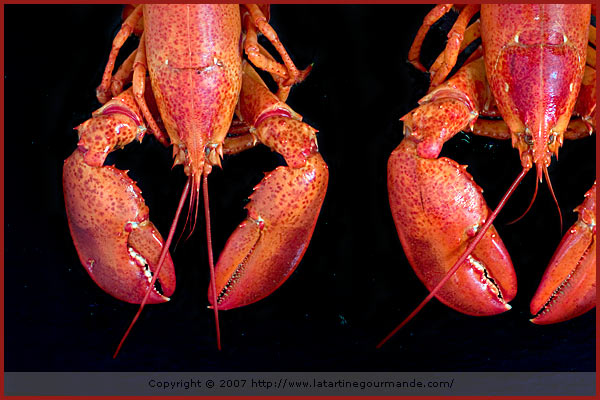 I was dealing with them alive for the first time. Because whenever the opportunity arose before me, I would freak out and unconsciously shy away from them.

“I cannot put them in the pot alive. I’ve heard that they scream, and that would scare the hell out of me,” I would invariably tell my friend R. when he asked for the reason why I had not yet cooked a live lobster.

To this, he would smile back, as if to tell me something like “C’mon Béa!” But then, he is a medical doctor, so of course he will not be scared of cooking lobsters live as I am! It was also at his house that I had attended my first lobster bake two years before.

Living in New England and admitting that you have never cooked lobster could be compared to saying that you are French and you do not eat camembert. Maine lobster — also known as Atlantic lobster — is a specialty of the North American Atlantic coast, and like many people living here, I have plenty of memories of times when I ate this delicious food delicacy: in Nova Scotia, Prince Edward Island, Maine and Massachusetts of course. But despite the fact that I love to eat lobster, I had never cooked these marine crustaceans alive until this past Friday. I had been willing to on many occasions, but always found a reason not to. Well, in fact, it was a little more complicated than that. If someone else would have put the lobsters in the pot, I would have had no problem at all. I just could not do it myself.

So when Katie from Sagamore Lobster Company kindly contacted me a few weeks ago to ask whether I would be interested in trying their Maine lobster, I knew that I had to say yes. I felt fascinated and scared at the same time, but excited to finally get my first opportunity to cook live lobsters. If she asked me, I had no choice but to say of course, hadn’t I? She and I exchanged a few emails to decide of the best time to make this happen — I wanted to make sure that I would have plenty of time to go through the process, you see — and we finally agreed that I would get my delivery on Friday. Little did I know about what I was getting into.

The last few days had been scorchingly hot in Boston, and to tell the truth, when Friday came, I had almost forgotten about the lobsters. Until 10 AM when the Fedex truck pulled in front of our house.

“Merde, les homards !” I thought as I looked outside. (Shit, the lobsters!)

My initial plan was to wait for the evening to cook them, when P. would be around. While I would take care of everything else, cut them open, find and cook a nice recipe to use them in, he might be the one to drop them into the pot, just in case I would not be able to. That was our deal. But there were two things that I had forgotten to take into account. The outside thermometer already indicated 98 F (36 C) when it was only 10 AM, and my fridge was full. The lobsters simply could not wait: they had to be cooked right away.

I ran to the attic upstairs to look for my preserve pot, the biggest I had in the house. I filled it with water and salt, and then decided to open my Fedex box. With a hesitant hand, I slowly started to lift the Styrofoam lid, also feeling my heartbeat go faster by the second. Two bubble wrap sheets were placed on top of a few iced packs with, at that point, still no sign of any lobster inside the box. “Ils sont en-dessous,” I heard myself say (they are underneath). I carefully pulled the bubble wraps and icepacks up, and then I saw them. There they were indeed, staring at me. At that point, I do not know what was feeling the oddest. Me standing there looking as if I had discovered a monster, or the poor lobsters looking at me from inside their Styrofoam box. I think we all looked scared. “Il y en a combien ?” I wondered (how many are there?) The one on top kept moving its long tentacles, and all I could see was the black eyes staring in my direction. I quickly closed the box and rushed to my computer. I needed quick tips and talk about what I was getting into with P. What would he advise that I should do? 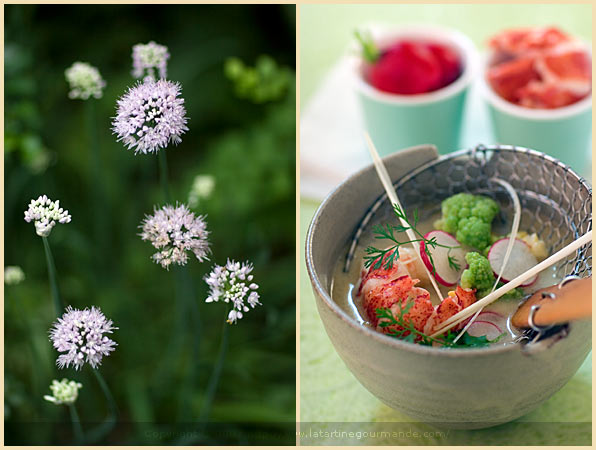 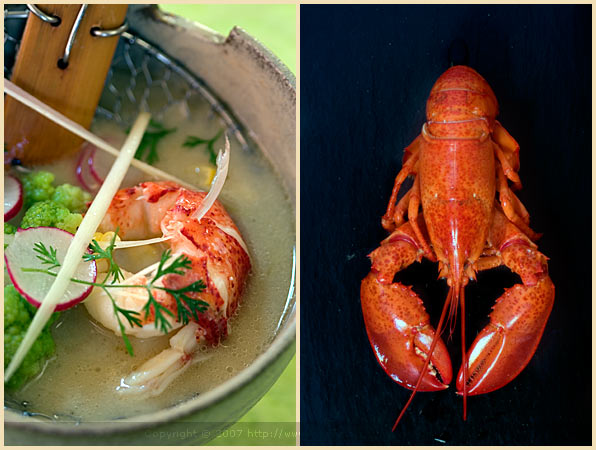 AIM Conversation between P. and Me.

Me: The lobsters arrived!

P.: Well of course Béa. They are alive.

M.: Mince, you are not here, and I have to cook them now. It’s too hot outside, and the fridge is full! There is nowhere to put them.

M.: I do not know how to pick them up. They scare me when they move!

M.: “I am going to try with tongs, if I can find a pair somewhere.”

I got up and walked to the kitchen island. After opening a few drawers and fumbling through them, I finally found a pair of sturdy tongs. “These will do,” I thought. I walked back to the box and lifted the lid again with the same hesitation. The same pair of ink-black eyes stared at me. “C’mon Béa”, I kept repeating to myself, “it is no big deal, you have done worse. Do it quickly!” I opened the tongs as wide as I could and placed them around the body of the first lobster. I closed them tight and started to lift, but the lobster slipped and fell back into the box. A small shriek came out of my mouth while my heart beat even faster. “Merde !” I thought. I had to find another solution. “I will try with two pair of tongs. One on each side.” Luck was on my side, I managed to find a second pair. This time, with the two pairs of tongs on each side, I managed to lift the lobster tight and high. It kept fidgeting its tail in all directions. Oh God, I had to be fast! “Drop the head first,” I had read. So I did.

Plouf! It went down into the pot full of rolling water. I had two more to do.

As I felt more assured already, the second one strangely felt easier. Yet, whether it was because of the heat produced by the boiling water or the lack of air-conditioning in the kitchen, all I could feel was that my cheeks were pink red and my hair all tangled up. When came the third one, I was starting to feel relieved. It went even easier. Plouf ! Done! I closed the lid quickly and set up the timer. Six minutes for lobsters weighing one pound.

M.: “Eh, they are cooking!” I typed quickly in my messenger window still open.

After the 6 minutes elapsed, I heard the beeper go off. I rushed to the stove and lifted the lid. The lobsters were pink red. They were definitely ready. I then confidently pulled them out of the pot and placed them in a dish full of iced water to stop them from cooking more.

I could start to relax, paused and smiled. Wow, did it really take me nine years of living in Boston before I was able to cook my first live lobsters? I had finally overcome my fear of doing it. I know, no biggie for many people, but for me, what an accomplishment!

I returned to the computer, and pulled up a messenger window again to chat with P.

M.: “I COOKED MY FIRST LOBSTERS! YEAH! We are eating an Asian Lobster soup tonight. It’d better be good!”

Not only was it delicious, but I am now dying to try again.

PS: The recipe of this soup is inspired and adapted from one that I found in an old copy of Elle à Table. I added the corn which adds a lovely sweet crunchy touch, and modified the steps and ingredient proportions according to my taste: I filtered the broth, decided not to cook the radish as suggested, and added scallions. 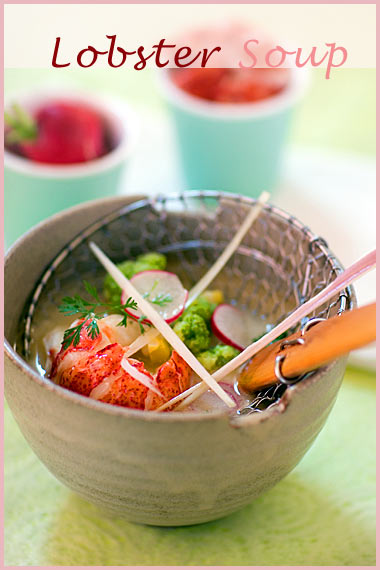