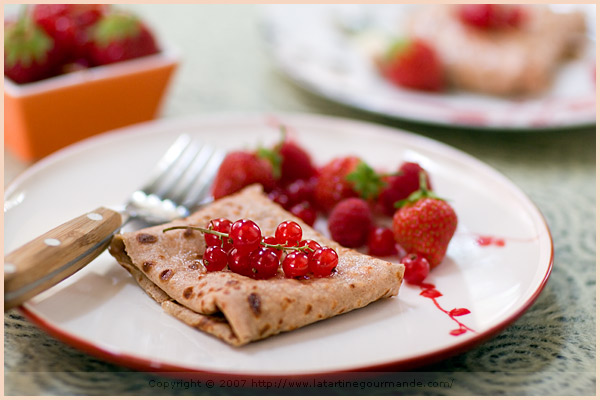 Our orange clock marked 11 pm and at that point, we should really have walked up the stairs, destination: bed. We had not slept too well over the past few nights. We had also worked longer than we should really have, unable then to healthily empty our brains before deciding to finally drag ourselves to sleep. But then, P. told me that he was not going to fall asleep at all.

I could see this coming. Crêpes are our kind of middle-of-the-night snack.

“Ben, tu sais comment faire, non ?” (You know what to do, don’t you?) I told him casually, smiling at the same time.

“But I want YOU to make them.”

What was this all about? And more particularly, why did I give in and why was I the one walking into the kitchen in order to prepare the batter, let it rest and then make crêpes for him, and me nonetheless. I do not know. For sure at this hour in the early night, the fun of flipping the crêpes high in the air would be out of the question. Way too risky! Beside, I was too tired to handle any possibility of a crêpe falling where it should not have, and deal with it. 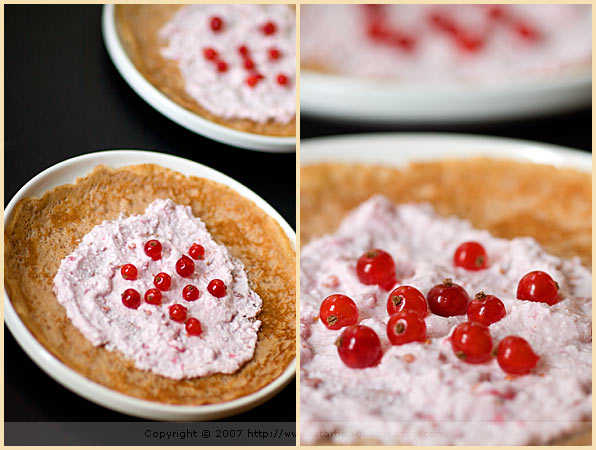 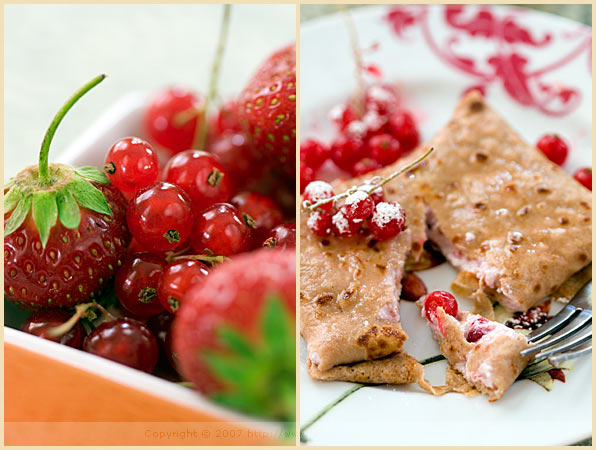 But it was really worth the wait. The crêpes were in fact delicious. And different. I decided to make good use of two new flours together, taking me away from the traditional farine blanche (white flour) typically used in sweet version of crêpes . Quinoa flour was one, and Chestnut flour was the other. Both are gluten-free, and full of nutrients that most basic all-purpose flours lack — quinoa flour is high in protein, calcium and iron. Their taste is also definitely stronger and more pronounced. Chestnut flour is sweet and nutty whereas quinoa flour is closer to the more commonly used buckwheat flour. Together they work great with chestnut as a flavorful addition to any sweet crêpe batter. With it, I wanted to make a simple yet creamy and mild filling, and used ricotta cheese to which I added a pinch of sugar. I had fresh red currants and strawberries picked from the market that we needed to use quickly — we know how short a life fresh berries have. So with all of these ingredients handy, I prepared Chestnut, Quinoa Crêpes with Red Currants and Ricotta Cream for us. Of course, the pictures you see do not come from our spontaneous eating episode that night (and instead of the hour wait for the batter to rest, I cut it to a half hour then). But the following day, I started again, and none of us complained. We liked it even better. You see, we had to proof the recipe, to make sure we still liked it and had not dreamed it.

“Je suis repu !”, P. exclaimed after he had swallowed down two crêpes. His face glowed with a large smile. For someone who typically eats his food rather slowly, it always amazes me to see how quickly crêpes disappear when he is around.

I had to smile too. But for another reason.

I am always amused to hear him use this off-the-beaten-path expression, that very same one that my mum enjoyed so much teaching him a few years ago, when he kept asking what this, or that word meant on our visits to my parents’. Not commonly used I must confess — and why he remembered, I do not know! — but since he likes to try de la caser (to stick it into a sentence) every time, it makes me smile.

One certain fact: that very evening, when he and I finally dragged ourselves to bed, we both fell asleep like babies, our tummies happy and repus. And, in case you had not guessed and were still wondering, the French adjective repu means to have eaten well/to be content, also known to mean “to be full“. But this is one expression that I still cannot use. 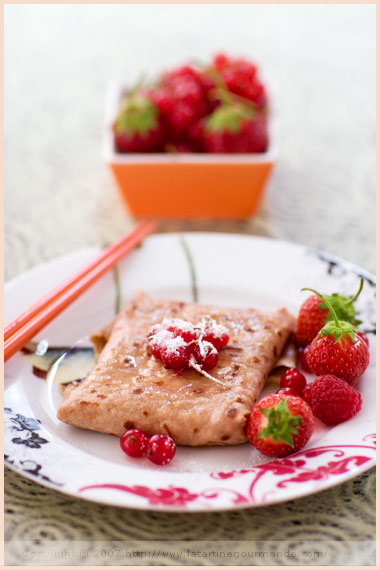 Batter for about ten crêpes :