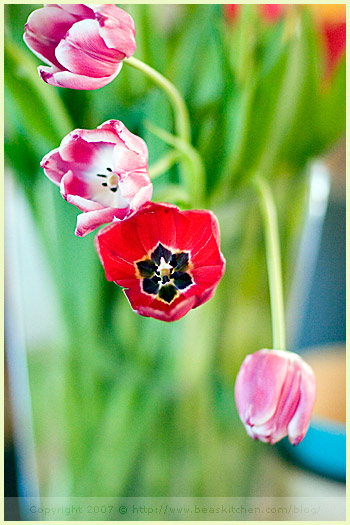 “Oh, you look so French,” the woman told me when she reached the page where one of my photos showed on my blog. “Really?” I replied hesitantly. I hardly knew her and did not want to sound too curious and intrigued. But truth being said, inside, I was dying to ask her: “But WHAT do you mean?” After hanging up, I rushed to the large mirror hung above the living-room fireplace and looked at my face. Was it my nose? My teeth? My haircut or the way I move my mouth when I speak.

[This? Spring in Boston, finally.] 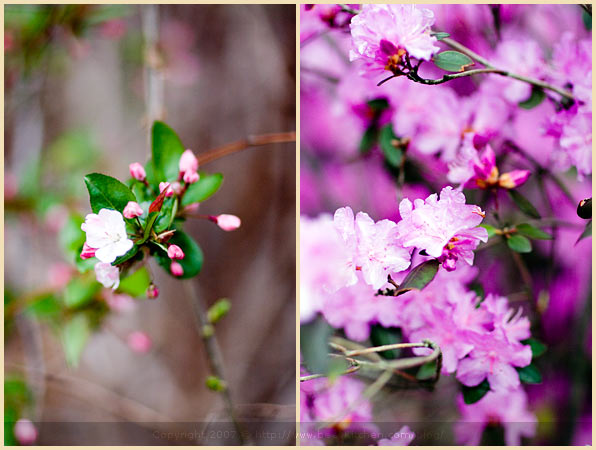 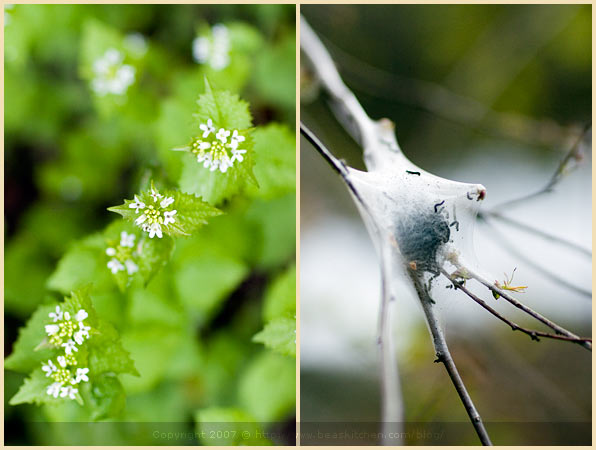 “Elle exaggère, évidemment,” I thought while examining my face closely, looking for what could be an indication that she was right. In fact, I did not even know what to look for. “She is only saying this because I am speaking to her and she obviously must have noticed my accent“. Well yes, it will sound cliché but I am still trying to manage to speak or write English like a native. And after ten years living overseas, I imagined that it would get better with time. But you know, sometimes I think it is actually getting worse. Every day I have to work at it. For example, take the following. Without counting the occurrences when I feel as if I cannot speak either language well, I also have to make real efforts to lose my habit — French I am told — of adding “euh” to punctuate the ends of my words. Especially after P. teases me and I get really upset. I don’t add euh. Why do you say this? But he is right. A random “Stop it!” becomes “Stop it-euuuuhhh“. Once I asked a friend whether I should add that I was French in an email I was preparing to send for a job, and he replied “Ahahah, I think your voice will make it clear“. Why is this foreign language not flowing like it would — or used to — in French? Why do I have to be assise entre deux chaises (being stuck between the two, literally sitting between two chairs)? In spite of the fact that I know well that I am not alone in this battle, I nonetheless wish that I could write in English as naturally as I wake up in the morning every day. After ten years, one would think it were possible, no?

Of course, as I think again about this woman talking to me on the phone, I come to realize that she is not the first one to tell me that I look French. But despite the many times when this happened, I still do not know what it means. And maybe I will never know. I have learned that this is obviously one thing that can more easily be seen on others. The reason why am I able to say “Oh, she looks so English or “Look at this woman, she could not be more Russian” when I am unable to see or believe that I look French boils down to how much I know about a country and its people. If I can tell that someone is Russian when I see him or her, it is perhaps because I have many Russian friends living in Boston. I can do this for them but not for myself. And so, I then started to question and think about this even more. What about my food? Does it feel French at all?

“Ah mais oui,” P. answered when I asked him.

I just don’t know anymore. One thing is sure. If it is, then I am definitely looking very French. At least I will be able to check it out for myself over the course of this week when I will be eating and speaking as locals do. Being and looking French. Perhaps. I surely hope that I will not have forgotten what it is like.

Note: I adapted the soup from a recipe I saw in the French March/April 2007 edition of the magazine Elle à Table (which I finally received in early May, two months after the release day). This is also part of these unusual events of living abroad and being told:

“Ah mais ce n’est pas possible, on ne peut pas l’envoyer avant la fin avril” (It is not possible, we cannot send it before the end of April).

“WHY? ” I had to ask, doing my best to remain as polite as one can possibly be after reading this odd response! “You DO realize that if I read about Easter recipes after Easter, it is somewhat gênant (annoying). I am subscribed to many foreign food magazines, English, Australian, but I have never heard of such a thing before!”

“Well, the magazine is sent from France.”

I did not comment besides regrettably canceling my subscription (although I was dying to ask them whether the magazine was actually coming on a boat meant to sail around the world first). A real shame since I really liked this magazine. 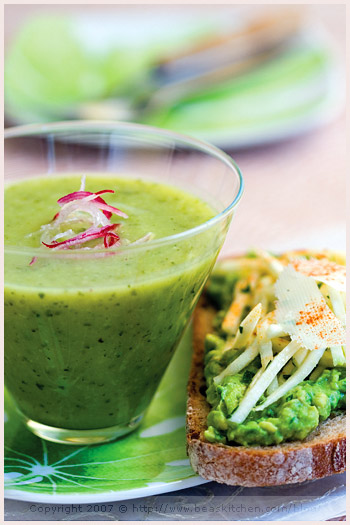 For the green soup: