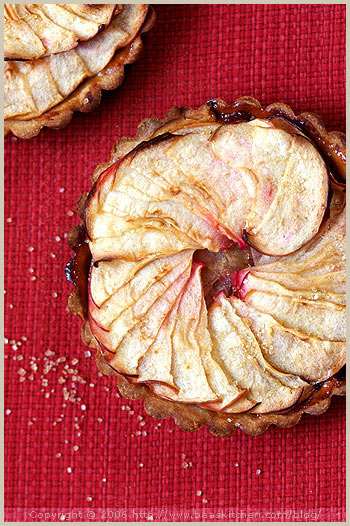 Monsieur Schneider is one of my parents’ oldest neighbors. Known in the village for his amazingly well-looked-after and immense garden, he is an old man by now. But I have always known him for the gorgeous-looking vegetables that he grows in his garden, which as a young girl, I always wanted to steal but never did. He would have noticed for sure as I suspected that he always treated his vegetables as if they had been his babies. Despite the fact that he can hardly walk today at an age of ninety years old, whenever I visit my parents, I can still manage to occasionnally see him climb at the top of a ladder to pick some hidden fruit, or attend to his tomato plants. “Il garde encore un petit coin de jardin”, my mum tells me (he still keeps a small vegetable garden). Amazing at his age. But I understand why. His garden is surely what has kept him alive and healthy. It is his best achievement, and he should feel proud.

Despite the fact that Monsieur Schneider has had a quince tree for years — it is actually still there, at the far end of his garden — during all the years when I still lived with my parents, I never fancied either trying or cooking this fruit. It was just not attractive. Here, I will have to pause and reckon that my knowledge about this odd fruit has always been pretty limited. Of course, I know that eating it raw feels like you are eating some kind of plastic, hence it is pretty much exclusively used under its cooked form. For me I am afraid, this only translated into a few recipe choices, including pâte de fruits (fruit jelly) which I have never been fond of. Hence for my whole life, I had neither touched nor tried a quince, even if I lived so close to them.

But what a discovery I have just made! Why did it take that long? 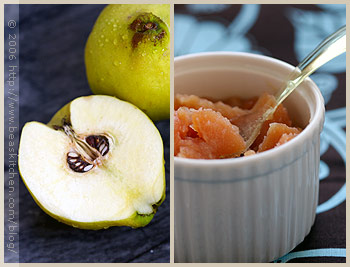 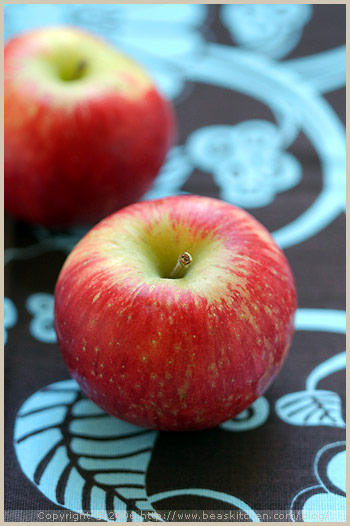 I was not meant to buy anything. I had promised this to myself on a recent errand in Harvard Square. Enough is enough. I do not need more stuff. J’ai assez de trucs à la maison ! (I have enough stuff at home!) I keep telling myself that if I ever want to move anywhere, I should be able to do it easily and quickly, with all I need packed and tossed in only a few bags. There was a time when this was actually possible, while living in New Zealand for example, but as I am settling more in my life in Boston, I just cannot help but accumulate things. Des trucs ! Des machins ! Stuff! Walking into the Coop bookstore, I was confident that I was not going to buy anything. “Je vais au rayon livres de cuisine,” I told P. ( I am going to the cookbook section) Just looking, I thought! Why did I even think that it was an option? About an hour later, P. decided to look for me. He came downstairs and saw me standing there, with in my hands a new treasure called The Sweet Life

. I had been found guilty of purchasing another cookbook. 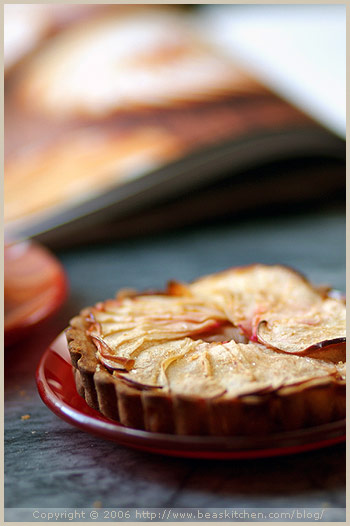 The Sweet Life is a dessert cookbook written by Kate Zuckerman, pastry chef at New York’s Chanterelle restaurant. Since I had pretty much never heard about the restaurant before — excuse my ignorance — there was obviously something else that intrigued me about the book. It started with the front cover showcasing a beautiful picture of a more-than-ever tempting dessert made of shiny poached pears swimming in a sugary bath. After my initial quick I-need-this-book reaction, I opened it to flip through its pages. More to please me inside? Not only did I then like the text layout, but I was thrilled to find explanatory sections about pastry making technics, the history of chocolate and chocolate labels, baked custard guidelines or the chemistry that happens between various ingredients. I could learn about the obscure uses of quince, pectin, browning butter, or how emulsifiers in eggs work. This was just the kind of book I needed: a bit educational, allowing me to travel into a realm I do not know that well.

Back home, I was dying to try a few recipes as soon as I could. Amongst them, I found delightfully presented Apple and Quince Tartlets. 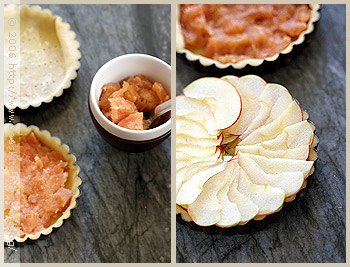 Although I ended up adapting the recipe, using one of my own pâte sablée recipes (sweet pastry crust) for example or using no sugar at all for the apples, I was just excited because I was finally going to try my hand at using quince. I chose Honey Crisp apples locally grown in MA because of their great reddish color and acidic flesh. The recipe was simple and straightforward, despite the fact that it required some organization — the wait for the dough or the cooking time required for the quince. I ended up making the tartlets over a period of two days, to make it a more pleasurable experience. And you know what? I loved the end result. The tartlets were pretty much pure fruit with sugar, without the necessity of an egg and cream batter. I realized that quinces are fun to use, good and sweet, and that I would definitely cook them again. Des tartelettes pur fruit (True Fruit Tartlets)

And I learned something.

The lesson that this cooking experience taught me was that without good reasons, I had felt prejudiced for years about a fruit I had never even tried. Are there ever any valid motives to feel prejudiced, really? So yes, it took me a pretty long time to finally break this belief but now, I am happy to know that next time I see Monsieur Schneider‘s quince, I will not let his fruit go bad on the tree. They will find a home in my kitchen, under a form of some sort! Sweet Life definitely has ideas for me. 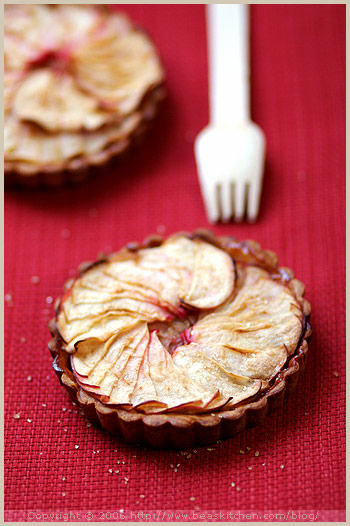 For the Sweet Pie Crust (about 6 tartlets)

Note: this can be done one day ahead

For the Quince Compote

Note: This can be done one or two days ahead, kept in the fridge.

For the Apples and Quince Tartlets

**I advice to use molds with removable bottom, I used size 4.5″.