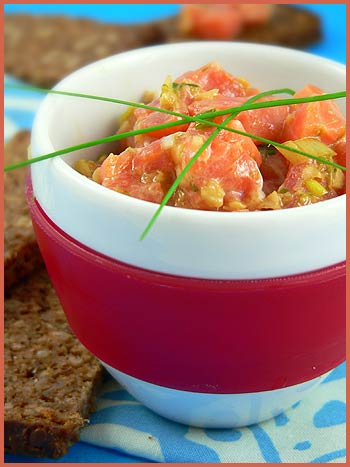 Most of you scored perfectly right in guessing what this dish was all about. We will have to acknowledge that it was not that difficult, c’est vrai non ? Pas de question piège, non ! (No trick question!) You guessed le saumon (salmon) et le gingembre (ginger).

In French, we have this saying:

I used to hate ginger.

I changed my mind.

I guess I wanted to prove I was not an idiot. Eh merci, hein ?

When I was a kid, I used to hate ginger! Of course, what did I know about ginger? Let’s face it. In rural France where I grew up, the chances that ginger would show up on my mum and grandparents’ tables were scarce. My mum’s cooking was definitely French with European variants, like Italian—we did not explore English cuisine as we proud French thought that there was none to talk or write about. As to Asian or Indian cuisines, they were too far away to be heard of in a tiny French village with a mere population count of 700 inhabitants. That did not include cows and sheep, of course. You might think that we could have learned about ginger in our biology/history books at school. Probably not, but maybe we should have as my ignorance about ginger was appalling. As a matter of fact, the only form of ginger that I knew was our traditional pain d’épices that we used to eat at Christmas time. At kinder garden and primary school, we, children, used to receive gingerbread on the day of Saint Nicolas—Dec. 6 to be precise. But I hated them. So much so! Wrapped in plastic, this pain d’épices bore the shape of Saint Nicolas or le Père Noël (Santa Claus) with an image of the same shape on it, which was the only thing I liked.

Heureusement, Thank God, times have changed and my travels outside my tiny small village have opened my eyes on the true life of the beautiful fragrance found in fresh ginger. While living in New Zealand, I ate plenty of food with a strong Asian influence, which was enough to get my stubborn self hooked on ginger. Since that time, whenever I can, I use it. A lot. Ginger is an ingredient always on my shopping list. Vraiment ! I use it, again and again, in stir-fries, marinades of all kinds, cakes, cookies, and in the following recipe, my salmon tartare.

Inspired by a love affair I have for lime, fish sauce (nuoc-nam), chives (from my garden) and ginger, I decided to make this simple salmon tartare that can be served as an appetizer or as an en-cas. Remember this word! Un en-cas is a French word which means a snack, in case you once get stuck in a host family in France, and are unable to communicate that you are peckish!

This tartare can be eaten on small slices of German dark rye bread, one of my favorite types of bread, as seen here: 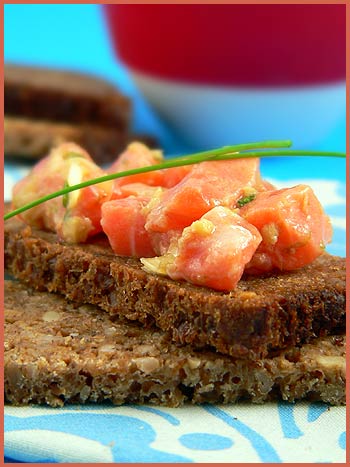 or under the form of an appetizer as the one that follows (patience encore, I will tell you more about the ocean in which the salmon swims here): 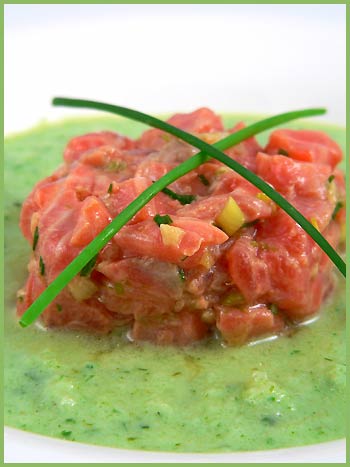 *The salmon needs to be extra fresh. 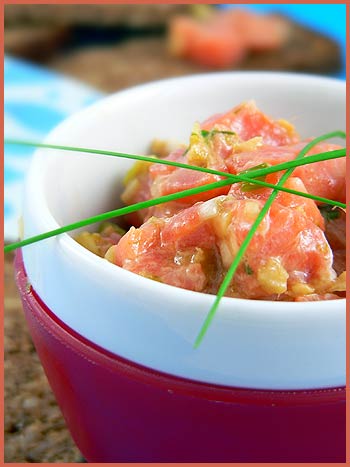