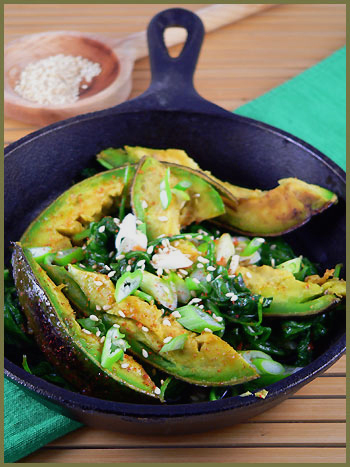 There are recipes that are just bound to surprise us. I remember looking at this dish a long time ago in one of my Elle magazines thinking I had never heard about sautéeing avocados before.

Would you have thought about it? Which brings the following thought I often fight with, and maybe you do as well.

There are so many things to learn in the cooking and food worlds that I sometimes feel discouraged that I will never “know” it. Not enough of a life time to learn about the food and the many cuisines that I wish I could learn about. Does it sound familiar? There are so many countries, cultures, and interesting ingredients and dishes that go along with it.Take this example. Yesterday morning, on my way back home, I went to the Asian market in my neighbourhood. Although I loved the full experience, I came home feeling deflated. I did not know where to start to tackle the beast, as we say, je ne savais pas par quel bout commencer (I did not know what end to start from). Asian cuisine is obviously further away from my roots and what I have intuitively learned about food, hence making it much harder to learn than for example, Italian or Spanish cuisines. As a linguist, I compare it to learning a foreign language which sounds are very foreign to me. Of course, while at the Asian market, I was not surprised to find that most of the ingredients had Asian labels. It however very quickly became evident that having with me one of my Asian friends would have helped since most of the shop assistants did not speak English. Despite my efforts to communicate what I needed with broad gestures and imitations of the forms of the ingredients I needed, I only got happy big smiles, and nothing else. Good enough you could say but I had come there with a purpose. I eventually ended up talking with possibly the only woman speaking English in the store and came home happy with my purchases. It worked but I was tired. And deflated. There was so much to learn. How would I ever make it?

When I read about sautéeing whole slices of avocados with their skins, I was a bit suspicious and dubious. What was it going to taste like? In the magazine, the article comprised a series of recipes given by a local chef from a restaurant set on an exotic island. Was I going to be sold on the idea? I read on, looked again to make sure I got it right and had one of those moments: I was suspicious but I sensed the recipe was going to work and I was going to like it. And it did not fail.

Making this simple dish is as if you were on an exotic island for a moment. I would not mind that part at all as a matter of fact!

Note : I substituted spinach with arugula 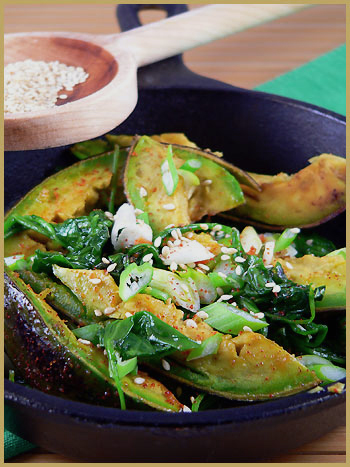