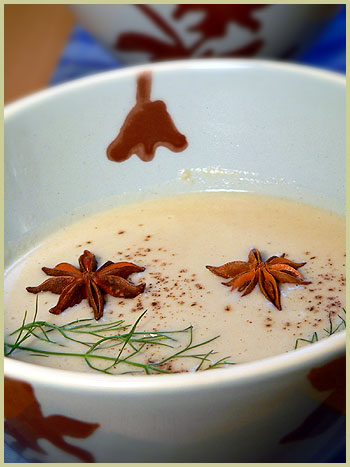 I really seem to be going around food themes this year. I am discovering new spices and forgotten vegetables. And I am cooking them.

I must have made an unconscious 2006 resolution that I am really sticking to doing.

But a stronger reason is more simple and basic. I love soups, the soft texture of a soupe moulinée ; soups are easy to make and just food for great lunch ideas that can always be eaten the next day. Because I think in those terms, always!

The word Soupe (soup) comes from “suppa“, which means to dip (tremper). In old days and for many years, people’s dinner consisted of dipping bread in water, warm milk or broth. I remember my mum telling me that during harder times with small means, dinner for her as a child could be made of a milk soup with bread. Hence the French word le souper, which is another way for us to mean dinner. For many years too, I remember my grand-mother asking for this basic dinner meal, that is a milk soup with pieces of bread in it.

There are a lot of different kinds of soups. In French we have different words to name all of those: potage, soupe, bouillon (or consommé), and velouté .

Why do we make things complex you wonder? Ah well, English has its tricks too. I remember having to learn all the different words to designate sounds or light. There were so many! Listen to this list if you are ready: “bang, bellow, blast, blare, boom, bump, buzz, chatter, chink, chirp, chirrup, clang, clank, clash, clatter, click, clink, climp, crack, crash, creak, crunch, fizz, gibber, grind, murmur, mutter,….” Shall I go on? I had to know them all when I was studying translation! Maybe I should have taken German as a first foreign language [thinking].…well maybe not. So, all in all, I think we can deal with 4 French names for soup.

In winter, we eat warm soups, in summer, cold soups. At least I do. Nature is like this. I would not crave a gazpacho in winter for example. And so last week, I made a lighter version of a soup velouté (I learned my lesson, it is a velouté since there is milk added to it!) discovered in Cuisine Gourmande. My version is lighter (no cream), with more vegetables.

Fennel Velouté and its Sweet Spices

Who said that making soup was difficult?

And for more ideas on fennel soups, yum, to warm up and replenish in lost-to-winter-fight vitamins, check out this delicious fennel soup recipe made by Mercotte here. Looks delicious! Take your French dictionaries out!

More soups on the way. Come back later! I am experimenting more with vegetables and spices. My 2006 theme? 😉 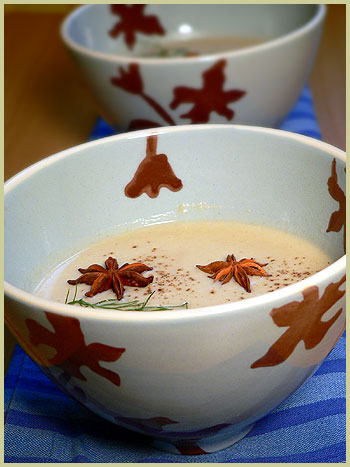