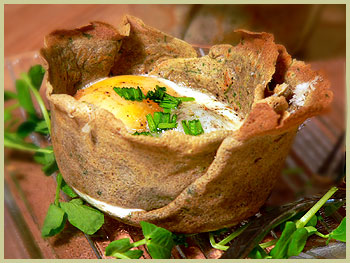 Sam’s and I read:

I pulled another window and surfed to another blog by a fellow foodie, Jam Faced and I read:

Again!
Did I miss something? What planet do I live on?

This past vacation really made me forget about the essential things of this world, what month it is, what day it is, what I am supposed to celebrate! Of course sacré bleu, how could I forget this time of year, from la chandeleur to Mardi Gras, when in France and other places we make crêpes, crêpes, more crêpes (and beignets (doughnuts))! But of course, I get it now. I know what happened! I was simply not here, so I am thankful to see I am just not as of yet losing it fully.

At the discovery of the news however, I had to sit down. Yes so early in the day. I was having a memory moment! Filled was my head with the memory of my childhood, when my mum would prepare a whole stack of crêpes for dinner – at that point, I think my brother and I must have begged her with it for days “Maman, c’est quand qu’on mange des crêpes ?” (Mum, when are we eating crêpes?) She was a patient woman but would give up in the end. Those times were just heaven on earth-and I mean not our nagging but les crêpes-, the perfect idea of a dinner for a young French girl and her brother: crêpes with sugar and lemon juice. We would roll them as cigarettes (kids playing and acting like they are adults, you know) and gulp them down so quickly that I wonder now why our stomach was not exploding! And don’t ask me why, my brother and I also had a tradition: with crêpes, we would drink Geyer lemonade (made 5 kms away from my home village, today called Lorina and sold in delicacies places (épiceries fines ) or at Whole Foods even – I knew that back then, I should have invested my pocket money in their business!)

So yesterday, despite that true love I have for crêpes – I don’t call it addiction yet-, I just did not think I was going to be able to make up for that lost event and make crêpes. I had no milk at home and did not feel like going to the store. More importantly, I had a date with my friend Pato and quite understandably, had no time or any desire to do errands such as buying milk. I know what you are thinking, getting a bottle of milk is no rocket science, but I was simply not in the mood to be grocery-shopping, even for a simple bottle of milk. I have days like this!

I was a lucky girl though I thought. I knew immediately that my obsessive organizational whatever-you-call-that-thing would become handy on such days like yesterday. I was indeed remembering the topic of a post written before I left, with a recipe for crêpes.

If you are French and you do not know how to make crêpes, it is like you are…well, what is it exactly, can you tell me? Could it be like I do not know where the Eiffel Tower is. Just kidding! In any case, there is one sure thing. I am French and I love crêpes. Nothing beats the experience to travel to Paris and as a street snack, eat a crêpe sucre – citron (sugar and lemon juice) rolled in paper. The process by which I eat my crêpe in the street is quite messy (I end up with sugar in unexpected places) but it is just too good to mind what people might think of the scene: an adult with sugar all around her mouth and face. Only P. seems to mind, or at least is honest enough to tell me. Others might just smile and walk away.

You can eat crêpes sweet (I have a recipe here with vanilla) or savoury. In such cases, crêpes are no longer called crêpes but galettes. We like to make things difficult for all those poor foreigners learning French (and let me tell you, I have had a lot of those kinds of questions when I taught French). For galettes however, the flour used is different, such as in the recipe that follows:

It is an excellent idea for meals like an appetizer, a brunch dish or a light meal/snack.

Another variation I have done with the same concept: mix together an egg with some ricotta cheese. Add chopped cherry tomatoes, a chopped shallot, fresh herbs and grated gruyère. Pour the preparation in the crêpe and bake in the oven (same temperature and time). Place chives on top when you take out of the oven.

Note: You will probably be left with more batter for more galettes!

Adapted from Crêpes, Sweet and Savory Recipes for the Home Cook