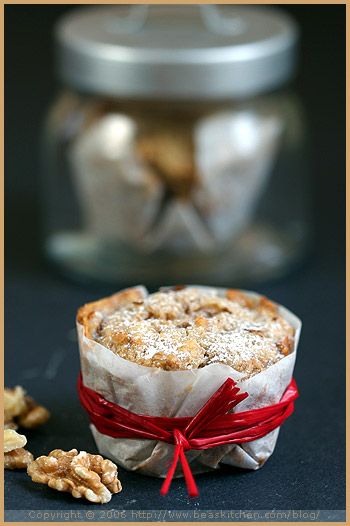 I had not touched this cookbook in a while until last week. Sometimes some of my cookbooks can be left untouched on shelves for weeks. I just have too many, even if I know this is not paying them justice. Y’en a de trop ! One pile of books seems to always hide another pile, with one book obstructing another one. “I like this cookbook a lot though,” I thought. “Maybe I should place it in the front, not to forget it.” Looking at the elongated shape of that tall, not-your-usual-size cookbook, measuring 11 x 16 inches (28 x 41 cm), I wondered how I could possibly just miss it since trying to put it away anywhere remains a challenge with such an awkward size. When you open it, it takes half of the kitchen table. With beautiful pictures on the right illustrating nicely designed text on the left, this cookbook showcases original recipes, with flavors that transport you in a realm of cooking perhaps never explored, covering many tastes and cultures. There is not a single recipe which I tried from it that was neither wrong nor disappointing. Not difficult ones either. Maybe at times, some recipes needed tiny adjustments here and there, but these were usually only small details fairly easily fixed, in any case. I used my common sense.

I could simply not avoid it, even if I wanted to. Because I had such a nice experience picking walnuts at my uncle’s only a few weeks ago, and because they are so seasonal — no surprise then that every cooking magazine I read talks about them — , I started to make a fixation on walnuts. Taking it a step further, I started to obsess about baking walnut cakes. Flipping through the pages of the pile of monthly cooking magazines accumulated by my chair, I found a few recipes that I marked. Initially thrilled to find a good number, many of them unfortunately gave results far from equalling my initial anticipation. The first recipe I tried was just blend in taste, the second one turned into a disaster with an unappealling what-is-supposed-to-look-like-a-cake flat mass. Almost discouraged, I caught a glimpse of Philippe Conticini’s cookbook, Tentations, and decided to look inside. My lucky day! I extracted a wonderful walnut cake recipe. 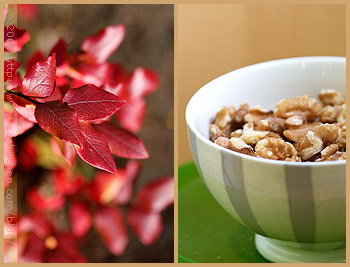 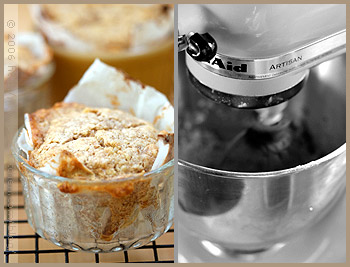 Walnuts are good for our health, providing a lot of good omega 3 fatty acids and vitamin E, to name only a few. A good reason to stock up on them but deep inside, I know this is not necessarily why I like to eat them. They are crunchy — a big plus for me — and make an excellent food snack at any time of the day, preferrably often, even more delicious when toasted in the oven, or flavored with spices. I can never resist walnuts. Why would I? They are even nicer if you can pick them fresh in their shells, when they are still green. We used to make wine with them, du vin de noix, never lasting long, I can tell you that part. But this is a total different subject.

I am pressing you to try this recipe. These walnut cakes are simply amazingly good. Moist, light, not airy but crunchy, what can I add to convince you? They require neither flour nor egg yolks, but crunchy little pieces of walnuts lightly wrapped in a batter made of egg whites. Some sugar and butter are added, of course, and that is pretty much it. In a week, I already baked two batches. Walnuts winning over chocolate even, that is saying a lot for P. and I for whom dark chocolate remains a must! 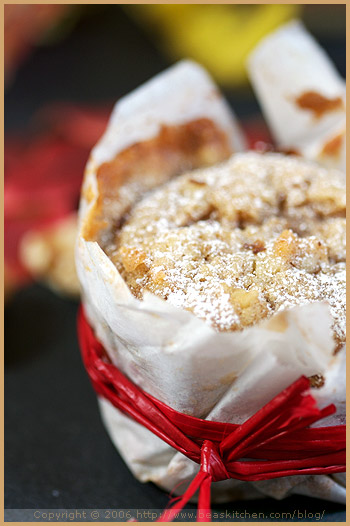 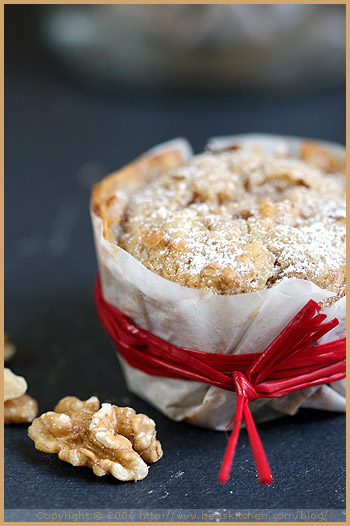