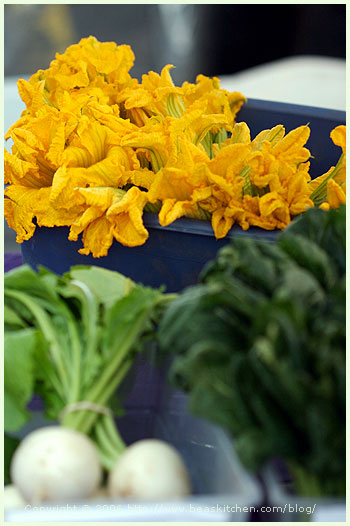 P.: Where are you going?
Me: To the market, see you later!

There were about ten or twelve white tents easily visible from the traffic light where I stopped. I could see them more clearly as I drove closer, and I was eager to park as quickly as possible. 12.00 pm. It was already late and I knew that the market would end within two hours. I was afraid that all the vegetables would be gone, so I rushed to get there. I spotted them almost right away. From the distance, they almost looked like a nice large bunch of jonquilles (daffodils). But they were not. The stand where I found them at the farmers’ market that morning did not have much to offer, but enough to surprise me. Run by two Asian-looking men looking fairly shy for being at a market, I found everything that other farmers did not have. My smile said it all. Between the different kinds of greens they had, pea tendrils, Thai basil, it was impossible to miss the patch of bright yellow in the corner of the stand. Chouette alors! Des fleurs de courgette !. (Cool, zucchini flowers!) I did not think twice. At $2 the bunch of 8, I refrained from buying more since I knew they would not keep. As a matter of fact, I would only have a few hours to think about what to do with them. We had initially planned to go out for dinner, but now that I had zucchini flowers in my hands, the evening would somewhat be different.

Me : Change of plan. Tonight, we eat at home.
P : Why?
M. : Zucchini flowers won’t keep until tomorrow.

And I was thrilled. I had never cooked them before, although I had meant to many times.

It is certainly the time of year to find them. Fanny, Lucy, Ms Glaze or Dianka are all presenting great ideas to eat Flower Zucchinis.

I did not have to think much. In my head, I already knew that I was going to include ricotta to sautéed vegetables, which is a stuffing I particularly like. Simple but surely aromatic. 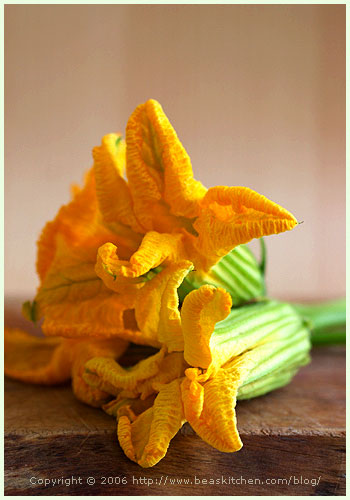 I am not sure about the extent by which people use them here in the US, but I know that in France, these flowers are commonly eaten in the South, where they are une spécialité (a speciality). Un plat du Sud? (a dish from the South?) Perhaps. At least this is a common belief, as recently told to me by a French woman coming from the South, now living in the Boston area. In fact, it could simply be explained from the fact that courgettes were initially mainly cultivated year round in the South. I never really ate fleurs de courgette while growing up and was therefore not too familiar with them. I know that one typical way to prepare them is to use a batter in which they are dipped before being deep-fried. They become des beignets de fleurs de courgette. But what to do when you do not want to deep fry your food, or make a mess in the kitchen? Imagine something else then. I actually preferred to bake them and decided to make a shortcut version of ratatouille mixed with ricotta. It was seasonal after all.

Not the nicest looking dish all things considered, but to be honest, I love how they looked on our plates. Every five minutes or so, I could not help but stick my nose into the oven to check what was happening to my fleurs. What shape were they going to have? Would they cook easily? The flowers obviously changed in shape and color. What did I do to those beautiful petals?

I served them with steamed couscous and a green salad brought from the market as well. We agreed that they would be the perfect small appetizer too, 2 flowers per person as an example.

Stuffed Zucchini Flowers
(For 2 people as a main course, 4 as an appetizer) 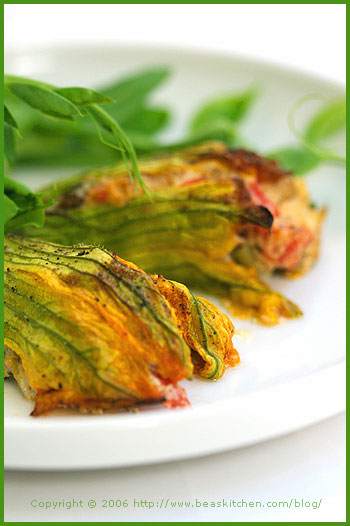