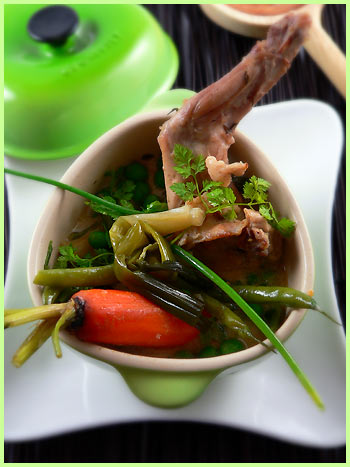 I am noticing that I am not presenting many meat recipes. I had prepared this story a while ago and think it is time to share it with you, before it is fall already and I do not know about it!

I have an interesting story to tell you.

I moved to the US for the first time about 10 years ago; I was a small meat eater then. Many reasons explained this behavior and to make it short, I could say that I was simply not interesting in the texture or smell of meat in general. Furthermore, there were so many other things attractive to the young woman I then was, and the teenager I had been. Why bother with meat? Coming from France of course where meat is largely consumed, this was not something to make a French mother very pleased. My mum constantly tried to feed meat to me BUT I was resistant. Was it a mother/daughter conflict? I am not sure, although I am known to be stubborn (Are May children all like this?) I would however give in a few times, only when she made things I liked best. What were those? Blanquette de veau, gigot d’agneau, lapin à la moutarde, and hachis parmentier to name a few. I could not care less for hams, jambon de Bayonne or any types of charcuterie, except of course my grand-mother pâté de lapin or saucisson sec! Those were precious. Very frequently you see, student life aggravates the tendency whereby the young population gives up eating meat because it can be a hassle, and I surely was not excempt. Moving to the US where being a vegetarian was made so much easier on me, I got converted and became vegetarian, although I still ate fish and all dairy products. Life went on with no problem, and after a year spent teaching French, I moved back to France before my next step: New Zealand. Although I lived in the country of lamb by excellence, I had truly became a converted vegetarian. No way I was going to eat meat. Next step: moving back to the US. Still no meat in sight until that very day, when I was told by my doctor that it could be a good idea if I resumed the consumption of meat, as a natural way to fight an anemic problem I was faced with (as I have always been very active and sporty). Hearing this advice from a truly vegetarian man puzzled me at first, but I was convinced: it was going to be the easiest and most natural way to fight my issue. I could do this. So I tried.

I came home and told P. that the plan was to resume the consumption of meat. He looked at me and said: What? Really? What on earth are you going to make?
I looked back: Ben j’en sais rien! (Well I don’t know), I never cook meat so I don’t really know what to make!

I had no clue.

I was faced with an obstacle. Not only did I have to overcome the psychological but the practical obstacles. What could I make? I searched my memory in the hope that I would remember a meat that I loved while I was a kid. I got it. As horrible as it sounded for the vegetarian that I was still, I was going to cook rabbit. I called my mum and asked her what advice she could give me as I was really clueless. I was going to cook her recipe of lapin à la moutarde (Rabbit in Mustardy Cream Sauce). P. was working from home at the time and on that particular day when I put myself to work to cook my first meat after almost a decade, around 6:30 pm or so, I heard him come downstairs and ask “What is this smell?” He walked in the kitchen and stopped. His eyes could not get away from the kitchen stove where he could discern tiny little legs sticking out of the pot where my rabbit was happily simmering. Yes mon chéri, on mange du lapin ce soir (yes my darling, we are eating rabbit tonight). Shall I sum it up here? We did not leave a crumb! I guess we were both not meant to be vegetarians!

Rabbit is a commonly eaten meat in France, not always easily found in the States. But when I find it, I am very happy to cook recipes like the one that follows. I love rabbit as a meat but I love rabbit the animal. I do not get this paradox but such paradox it is. 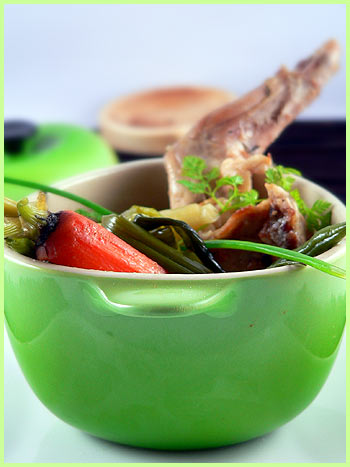 I had to show those sticking legs, just as P. and I saw them at that time…. 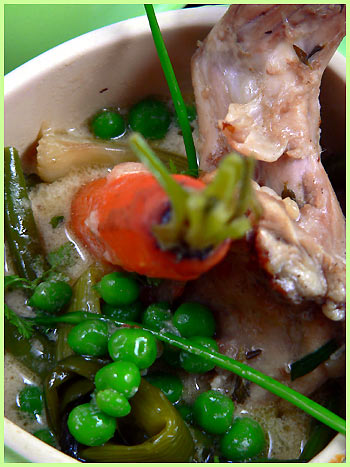